I'm in Cologne now. I woke up this morning around 9am, after only a few hours sleep. Last night I was able to chat with Jennifer for a while and then I packed my bags so that I didn't have to scurry around this morning and forget something.

Yiorgos woke me and we went down to his parents house so that I could say goodbye. I'm not sure when I'll see them again and I hate saying goodbye in those situations. Therefore, I gave Dimitra a big hug and shook Thenassis' hand real hard. Yiorgos translated our conversation and it boiled down to the fact that I have to come back with Jennifer and the girls soon. I really hope to and we'll give it a serious talking next time we are planning a family vacation! 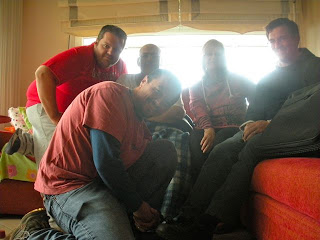 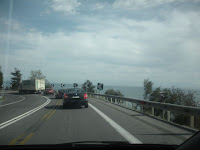 Yiorgos and I left for Thessaloniki around 9:40am and had a great drive. It was neat to see northern Greece in the daytime. There were lots of very cool landscapes with mountainous villages next to the Mediterranean Sea. I snapped a few pictures and we talked the entire time. It's ironic that the day I arrived, it was overcast and raining. The day that I leave it's sunny and hot. The drive was simply beautiful! 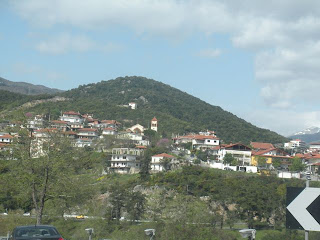 When we arrived at the airport, Yiorgos helped me get checked in and saw that I made it to where I needed to go then we said our goodbyes. I thanked him for everything and he humbly said "Wheteva man, I did nothing". Whatever malaka! Have fun tonight around 10:30pm, once you're evening can begin! :) We'll be seeing each other very soon! Thanks for everything, you Malakasian (a Greek Malaka from Malakasa)! :)

I made it to my flight on time and actually caught myself dozing off on my flight to Vienna, Austria. The language around me had changed drastically. What was once fast paced gibberish (ie. Greek) had turned into a plane full of Hanz-n-Franz talk. I loved it! It was cool landing in Vienna too, because as we were landing I looked out the window and saw the typical Austrian villages scattered all over the country side. Unfortunately, my camera was in the overhead strorage area at the time... Vienna was a quick visit. I rushed through the airport and made my way onto the flight to Dusseldorf without any delay. The flight to Dusseldorf was crazy fast. It seemed like we were up and down in no time.

When I landed, I found Dariush waiting for me after baggage claim! I gave him a big man-hug and we began catching up immediately. First priority was to get some more euros. I was out and had a stack of US Dollars that were burning a hole in my pocket. The exchange rate was HORRIBLE, but... what can you do?...

The drive was simple and quick. It took about 1 hour for Dariush to zip through Dusseldorf and into Cologne. We caught each other up on what's been happening more during the drive and had many laughs. Honestly, it always feels like Dariush and I pick up right where we left off every time. It's amazing but true! 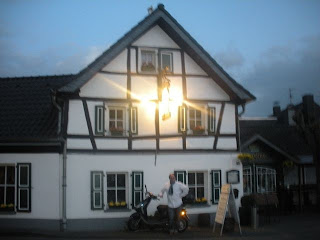 Dariush standing in front of a pub near his house.

The drive was very beautiful once we got off the highway. :) As we entered his village, I was just mesmerized by the fact that I was actually here. Similar to Greece, I've always wanted to visit Germany and it kind of hit me that I had made it finally. His little village kind of reminded me of Montevrain, the French village I ran through when I was in Paris a few years ago. However, the houses in this neighborhood were (of course) a bit more "German" style. Not sure if it was the rooftops or what... it's hard to explain. :P

When we arrived at Dariush's house, Rita, Nouchine, and Jonathan were just getting home on their bicycles. I can't believe how big (and cute) Nouchine has gotten, and it was great to meet Jonathan. He's 1 1/2 years old and full of personality; much like his zany father. :)

I took a quick shower and then we had a nice dinner of rice, chicken and vegetables, and red wine. Rita's mother, Uda, joined us for dinner and it was fun to talk with her. She speaks very little English and I speak absolutely no German, so we communicated with many hand signals and simple guessing of what the other actually said. :) From time to time Dariush and Rita would pass through the room and we would use them for translating simple sentences. Regardless, Uda and I had a great conversation (if that's what you want to call it).

After dinner, Rita made me a delicious cappuccino and we all discussed the plans for the week, taking Nouchine and Jonathans schedules into consideration. Rather than give it all away here, I'll update my blog each day with the details instead. :) 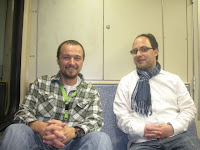 Before the sun completely fell, Dariush and I headed into downtown Cologne via the metro and had some German beers and then walked around the city a bit before heading back. I had no idea how beautiful Cologne was. I mean... Wow!! I'll be posting some amazing pictures on here throughout this week, so stay tuned...

Here is one picture to wet the whistle:

This is great Luc! I have pics of the same cathedral in Koln!! The Dom..I think there is a beer with the same name? Anyway, sounds like your trip has been super epic to this point! Enjoy a fresh Reissdorf Kolsch for me!