Well this is long overdue, and I couldn't put it off any longer. :)

On April 29th I ran the Dusseldorf Marathon in Dusseldorf, Germany. I was a bit nervous about the race for the last 3 weeks. I've not been training much lately, and actually have been eating all kinds of delicious foods with no solid training schedule. Therefore, I was really just looking to go out and enjoy the run through the beautiful city... As it turns out, being unprepared and a bit undertrained worked in my favor; I ran my fastest marathon ever. 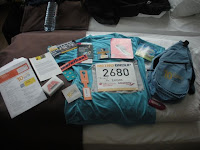 I prepared for the run the night before, and informed Bob and Michelle that I'd probably be running about a 5hr - 5:30 race if they'd like to look for me at the finish. I woke up in the morning with a feeling that this was going to be a very tough challenge for me and that I'd have to push myself very hard. I actually, warmed up by running to the starting line and working up an early morning sweat. I think I surprised some people as I ran past them on my way. 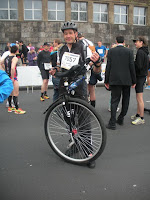 At the starting line, there were people and porta potty's. :) I also saw something that I'd never seen before. There were all these unicyclists who were there to ride the course on one wheel. I'd never seen these types of bikes before. I've seen unicycles, but these ones had huge off road tires. They started their race a few minutes before us marathoners started our race.

Once we got moving, I found my groove and just kept a steady 9 or 10 minute mile pace. The first part went along the Rhine River. Actually, along this stretch was a famous house that was on House Hunters International a few weeks prior to my trip. 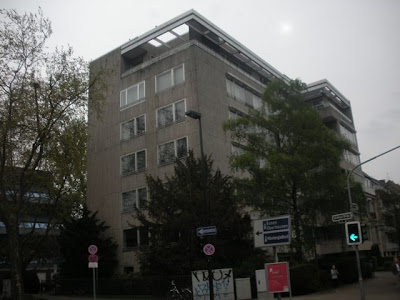 The course was absolutely beautiful, we ran through various residential areas, as well as old German areas. We ran by the river, over the river, through the industrial areas, and down the roads of the busy Zentrum area of Dusseldorf. The crowd support was awesome. People lined the street at every corner to cheer on the runners. Many groups would have cookouts or little parties on the side of the road. Some even had full bands setup and were playing music for the runners. I loved it! 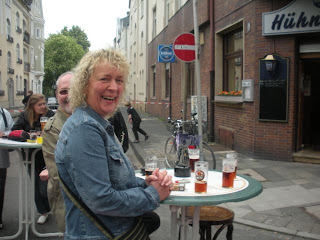 A spectator drinking beer @ 9am 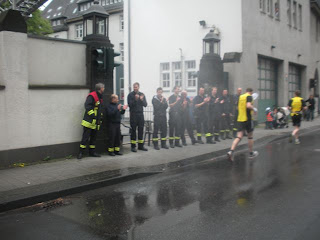 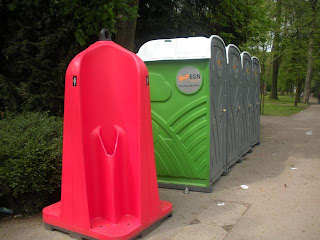 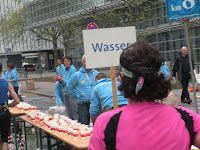 Oddly, the further into the race I got the faster I felt like I was running. After about mile 15 or so, I looked at my time and realized that I was on course to get a PR; I just had to keep up a steady pace for another 11+ miles. I really wasn't huffing and puffing and felt very strong, I knew that to keep it up I just had to keep my focus on my leg work and pay attention to my hydration management. The sun was out in full force by this point and it was pretty hot on certain stretches of road. I made sure to grab a cup of Wasser at each Wasser station. I also started to focus on all the things that make it easy and effortless to run. Things like leaning forward and letting gravity pull you. Things like shoulders back, chest out, pelvis in, arms down, chin up. Silly things, really... but things that actually work.

My splits were faster in the last few miles. However, I bonked pretty hard at mile 25. The sun was bumping by this point and it was getting the best of me. I felt dizzy a few times and really felt that if I hadn't stopped to cool down, I would have passed out. Not a good feeling with only 1 mile to go. My lower back was also starting to tighten up on me and the pavement pounding was really taking a toll on me. Of course, I wore my Minimus shoes, so there was very little cushion between my bones and the pavement.

I had pushed hard for 25 miles and this was the first time that I actually stopped and walked... The walk only lasted about 15 - 20 seconds, and then I was at it again. Around a 5 minutes later, I got the feeling of passing out again and had to stop and walk again... I had hit a low in my race, but I only had about 0.5 miles to go until I was done!

Finally I decided to suck it up and push. I gave it my all and crossed the finish line with a new PR. Granted my PR was only a few seconds faster than my last PR, it was still a PR! This race actually had an extra 3/10's of a mile to the course, so this means that my PR was even better than recorded.

I crossed the finish line at: 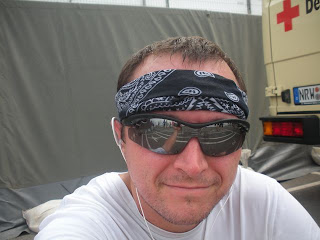 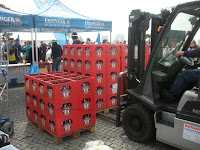 This was a great experience. It was my first international running event, and every aspect of the event was spectacular. The crowd was amazing, the weather was perfect, the city was beautiful, and the post race goody bag was (by far) the best I've ever had! Every runner got a bag of all kinds of foods, meal tickets, and we were even treated to a free TALL beer. German Style Baby! 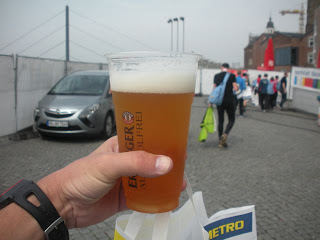 After getting my bearings back at the finish line, I hobbled back to my hotel room and lounged around for about 5 hours before getting ready and spending the evening with Bob and Michelle and Friends (link). This race really hurt. I typically don't go out and run fast races. I typically run races to finish. This was was special for me in many regards, and I was happy I pushed myself to a new personal best time. My lower back hurt, my hips were shot, and the balls of my feet were tender. Perfect race!