Today was an extremely fun day!! I woke up around 8am after a long night sleep. The plan was to meet Dariush upstairs so he and I could go to some fund raising event and I could see where he worked. We were to leave the house at 9 am sharp. 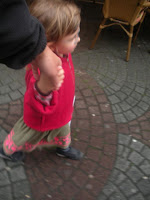 I came upstairs around 8:45 to find only Nouchine playing in a dark / quiet house in her pajamas. I realized at that moment that our plans had changed. I just enjoyed the morning with her and her amazing knowledge of the German language. :) I'm convinced that she still doesn't realize that I don't understand her. Regardless, I just go with it and think she is the cutest thing ever! I'm like her Pet-American that she likes to sit next to at meals and pull around by my finger everywhere we go.


We played the game "Memory" where you had to flip over cards and match the pictures. She was clearly making up the rules as we went and I (again) went along with it. :) Who matches a mushroom to a bird and gets a second turn? Nouchine! :) During this time, she also taught me the German number system: ein, zwei, drei, vier, fünf, etc... She got a pretty big kick out of my "accent" and we had a blast! :) 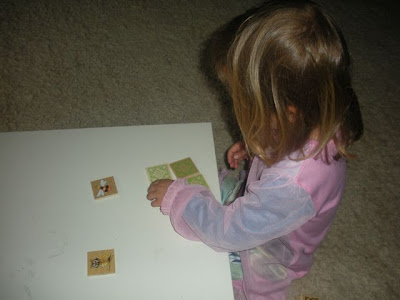 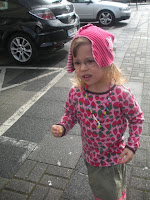 Around 9:30 or so, the rest of the house started to wake up. Nouchine took me next door to the bakery with a piece of paper filled out by Rita and Dariush that described exactly what to get. I felt like royalty walking into the bakery with Nouchine in her urban-hippie get-up attached to my finger. She jabbered the whole time, but I just smiled and agreed with her on everything. I handed the paper to the baker and we left with a lot more than we were supposed to. I think it was my fault, because I tried to improvise when I learned they were out of plain croisants. Whatever!! :) We all enjoyed a fun breakfast of breads with various spreads and some cappuccino for the American. 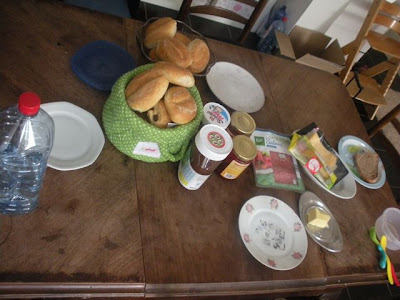 After breakfast, Nouchine and I took Dariush for a train ride to downtown Cologne so he could pick up a rental car for the day. We were all going to be taking another adventure out to the countryside again this afternoon. None of us knew where we were going, and it couldn't have been a better plan. These are always the best plans; no plans.

Dariush got a really cool car actually!! It's a new Ford Focus and it's decked out to the nines. It has all kinds of sensors and computerized aspects to it. The coolest feature is that when you are at a stop light or something, it automatically turns off to save gas. It starts back up as soon as you put your foot on the clutch to put it in 1st gear. Perhaps this is standard these days, but it was the first time I'd seen anything like it. Literally, everything on this car was computerized though, very cool!! +1 for America. Go Ford! 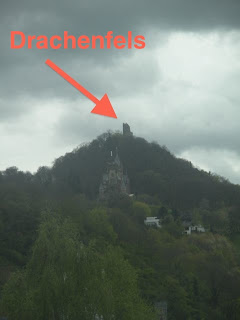 We came back to the house and picked up Jonathan and Rita, and then headed to the south down the Rhein River. Our first stop was an old castle on a hill named Drachenfels (ie. Dragon's Rock). It was amazing! The climb was kind of tough, but the delivery at the top was well worth the 30 minute climb. About half way up the hill, Rita took Nouchine and Jonathan back down. It was pretty cold and was beginning to rain. Once Dariush and I reached the top, it was pretty cold, wet, and windy. However, the view from the top, was simply amazing and I was blown away by how high up we were.

The ruins were built in 1138 and was built for protection for Cologne from the south. It was strategically built here for the unobstructed view of the Rein River in both directions. Simply amazing!! Check out this clip I took from the top:

From the ruins, we headed further south down the Rhein to a very old village by the name of Linz (aka: Linz am Rhein). This was an old village that was built back in the 800's (~1200 years ago!). It was simply. Awesome. Around every corner, I felt the history of the place. I could picture people living in the little houses, and I could also picture the town square filled with market people and all the stuff you read about and see in the movies. 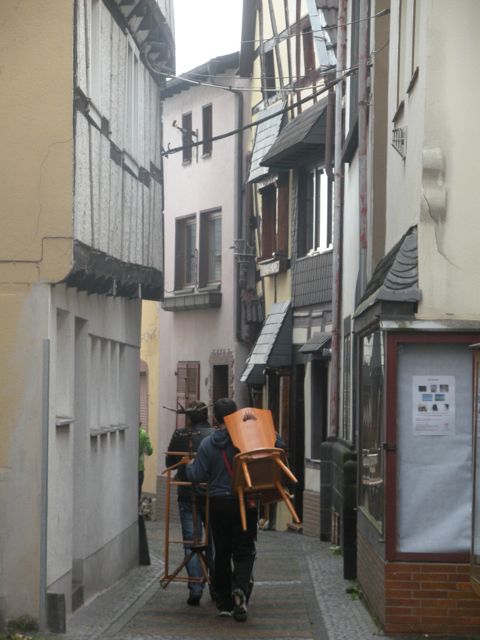 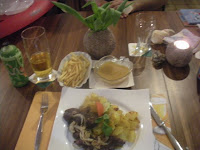 We ate at a really cool restaurant which was literally a cave. We descended a bunch of steps from the street into a cave, and then we went to the "lower" floor (down more steps) to another cave where I got to try an authentic German dish by the name of "Sausage Blood". It was... ok. :) I ate it, but... it was ok. :) After eating we walked around the village for about an hour and enjoyed the day. We walked up and down all the streets and went into a few souvenir shops.

At one point, we all sat in the village square and ate ice cream. I know that the village is all decked out for tourists, but I couldn't get past the fact that it used to be a thriving village. The clocked rang at every 30 minute interval, and that sound alone threw me back to the midieval times. :) Sounds silly, but I was really intrigued by this place. 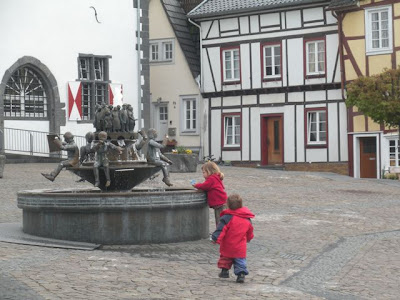 Around 6 pm, we headed back home as it was getting to be close to the kids bed time and we were all pretty well spent from walking so much. I went to the basement and passed some time by talking with Jennifer for a while and surfing the web. This gave Dariush and Rita some time to do family things (ie. get the kids to bed, power nap, etc..). 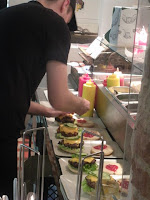 Around 8pm, I headed back upstairs and wanted to see if there were any plans. The plan was to go to a night-club (invite only) near Dusseldorf. Rita had planned to stay home with the kids and relax, while Dariush and I went to experience some nightlife. Apparently it was "80's night", so that was exciting. As it turned out. Neither of us were really up for the 45 minute drive to get there, nor the 45 minute drive home... again, it was already 8pm and we'd had a full day. 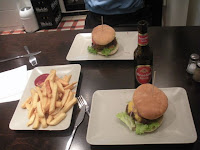 We decided to drive into Cologne and get some burgers and then stroll the "Bevarian District", which was basically an active strip of Cologne full of night life. There were all kinds of different clubs ranging from high-class to no-class. We walked the strip one way, then back the other and then decided to call it a night. We arrived back home around midnight and called it a night! 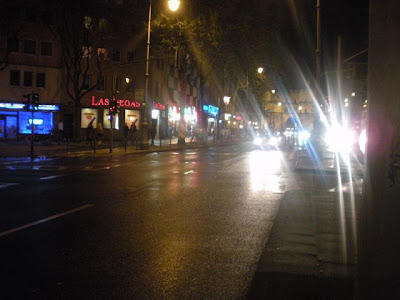 Tomorrow is my last day with Ghobad's and I can't begin to thank them enough for having me in their house. I know exactly how difficult it is to keep a routine of "school, lunch, nap, dinner,  bedtime". Honestly, I do!! It sounds very strait-forward for some, but I know first hand that it can be extremely stressful and draining to just go through this process every single day. Notice, I left out "family time" and "time for yourself". Again, it's tough... especially with an active toddler. 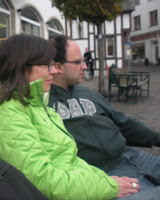 Here, I showed up on a Monday evening right in the middle of this process and they seamlessly weaved me into their days without any stress or signs of strain. I never felt like a burden, and they went out of their way at every step to see to it that I had everything I needed. They assured me that I had complete freedom to do as I pleased. With this freedom, I tried to help out as much as I could, while also making sure that I gave them their own space when I knew they needed it.

Dariush and Rita have built a beautiful family that is based on love, kindness, patience, and understanding. Kisses and hugs are an everyday thing around here with the kids and each other. While some might consider me a young "veteran" in the marriage department, I've absolutely learned a lot from this family. If all families shared their values, then this world would be a much better place.

Thank you Ghobads for a wonderful week here in Cologne. You showed me exactly what I wanted to see in Germany, and I didn't even know it at the time. You're wonderful hosts, and amazing parents! Stay happy and stay funky. 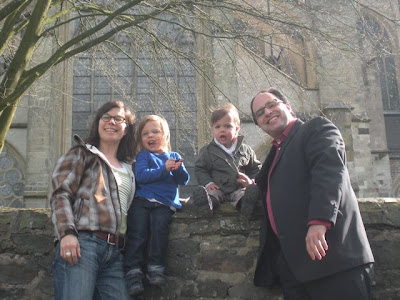 Good post! Thanks for taking care of our Daddy, Ghobad's! xoxox from Newark :)