Today was a great day. I woke up around 10 am and took a nice slow run through the forrest in Cologne for the last time. I left the camera at home and simply enjoyed the peaceful run. It was muddy and perfect. When I returned, we had a quick breakfast of breads and spreads, and I (of course) had Rita's delicious cappuccino to wash it all down with. 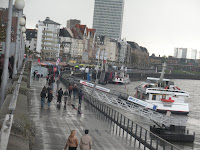 Around 12:30 or so, we all hopped in the car and headed toward Dusseldorf. The plan was to drop off my bags at the hotel and then go take a quick tour of the city before the Ghobads made their way back home. As I stated before, I like chilly weather when touring new cities. Well, today was no exception. It was very windy and actually thunder stormed at times. A few times we took shelter under various structures to protect ourselves from the freezing rain... Yeah, the freezing rain! :) 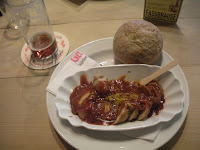 Around 4pm we headed to a local brewery / restaurant and we all ordered Curry Wurst for lunch. I actually chased mine down with 2 beers from the brewery and everybody else had apple juice. Since the restaurant WAS the brewery, the beer was very fresh and perfectly served. During lunch, I got to have a few more laughs with my new friend, Nouchine. I actually had her laughing pretty hard a few times it was a lot of fun! We sure had a lot of fun this week: story time @ night, morning game time on Saturday, German speech lessons throughout the week, and a loyal dinner-buddy every night. :) 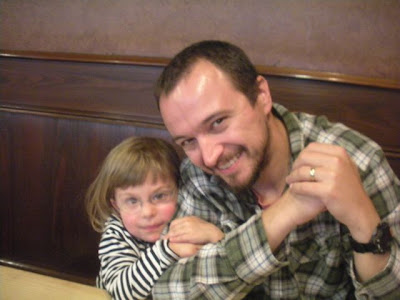 Me and my buddy, Nouchine. 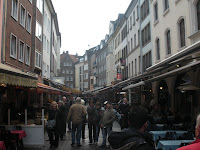 The Ghobads dropped me back off at my hotel around 5 pm and I got my bags unpacked and my hotel room organized for the most part. I was able to chat with Jennifer for quite a bit as well and just relaxed for a few hours. I watched some movie with Skeet Ulrich and Leslie Nielson and it was in German. I didn't understand any of it, but it looked like a pretty funny movie. Again, I was just unwinding and relaxing for a while before starting to think about dinner... 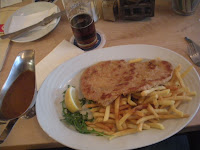 Around 7 pm Bob called me and wanted to know if I wanted to get some dinner at a nearby restaurant with him and his wife (Michelle). How could I resist?? :) They met me out front of my hotel a bit later and we all walked to a nice German restaurant that is about 200 meters from the hotel. :) Yeah, the hotel is in a great location! Anyway, I had no idea what to get, so I let them translate the menu for me and Bob ended up ordering an authentic German dish for me. It was some form of a "shnitzel" and it was "the shnitzel". :) It was a big slab of breaded pork that sat atop a mound of french fries. It also came with a side dish of a dark mushroom gravy that you could pour over everything to help it all slide down. Wow, delicious!

We all enjoyed some Altstadt beers and just sat around and talked for a while afterwards. I can tell this is going to be a fun two weeks. Bob asked if there was anything that I'd like to see while I'm here and I thought for a moment and realized that the only thing I'd like to see are more German pubs. :) Outside of that, I think I got all the tourism out of my system... I'm ready to start living like a local and enjoying some delicious German beers and dishes. 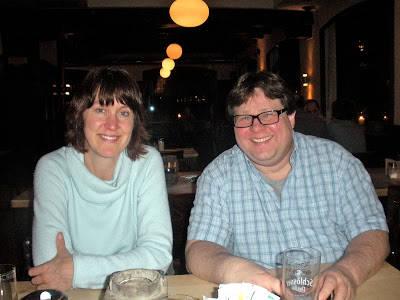 Quick Fact: While in Cologne, the beers are typically a Kolsch beer, whereas here in Dusseldorf (~100 km north), it's mostly Altstadt beer. It's a friendly rivalry, but you should never order a Kolsch in Dusseldorf, just like you should never order an Altstadt in Cologne. :) If I had to choose between the two, I think I may be a bit more partial to the Altstadt flavor though. It's a bit more dark and has a nice full flavor for my taste buds. 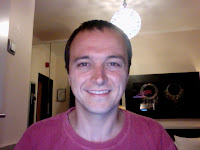 As of now, I'm basically done with my vacation and I'm prepared to work for the next 2 weeks! We have some exciting things going on right now at InfoPlanIT, and we will begin working on them while I'm here in Dusseldorf. It sounds crazy, but I'm ready to get back to coding again. I've actually got an all new look to kick off the first day of "post vacation" meetings.
author: Luc @ 5:55 PM