I've not had a solid internet connection since the airport in Thessaloniki, Greece. I've only been able to talk to my family via Skype from Yiorgos' iPhone yesterday.

Tonight, I'm online and ready to catch everybody up at home. 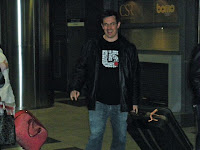 Volli's flight arrived shortly after my last post. Immediate we headed back to Larissa with all kinds of stories to tell and life to catch up on. Yiorgos took us to an AMAZING restaurant in Larissa, Greece by the name of Takis. We had some beers and lots of meat. It's amazing how much food 3 extra large humans can put away in a short period of time. We sat right next to a fire place and gorged for about an hour or two. The setting was amazing. The restaurant sat at the top of a huge cliff and overlooked the Greece countryside. It was located at the end of a long cobble-stoned street and there were very few people in the restaurant. Perfect! 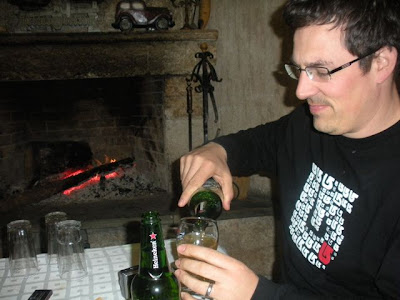 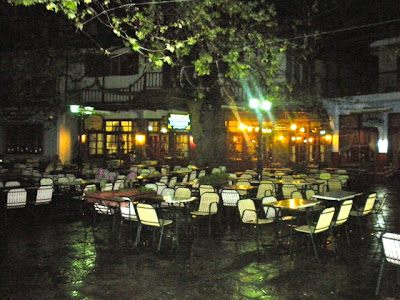 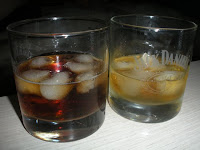 When we arrived back at Yiorgos house, we traded gifts and drank a few glasses of Johnny Walker scotch, which I purchased on the plane. We called Jennifer, my Mom and my Dad (it was his birthday), and then we watched Mission Impossible 4 before calling it a night around 2am (Greece time). My total time awake was about 33 hrs. Phew... Love it!

Tuesday, April 10th
We all woke up around 11am and were ready to get started. Immediately, Volli and I had Nikko's (Yiorgos older brother) drive us to a local park in Larissa so we could take a nice slow run together. We ran about 4 miles before coming back and preparing for the day. 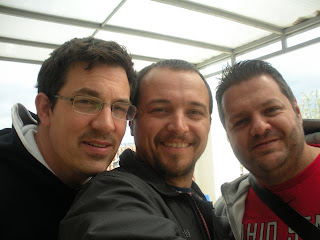 Our day finally started with some pastries and juice on Yiorgos' terrace. From there, we went to visit his parents. I was able to finally meet Yiorgos father, Thenassis. He has only known about me through pictures and stories. I've only known him through stories. It was great to finally meet him and it's clear how Yiorgos and Nikkos are so likable; they have amazing parents. Dimitra and Thenassis are amazing people.

From there, we went to visit Nikko's wife and children. I met Nikko's wife Misty and their two children Thenassis and Cleo-Dimitria. We had a great time, and stayed to visit for about an hour or two. From there, we went to see Yiorgos' coffee shop / bar. Yes, Yiorgos owns a bar! He and Nikkos run a bar by the name of The Playful Room (link). It was awesome! We hung out there for about 3-4 hours drinking beer and enjoying each others company. I met many people here and the atmosphere was awesome. They have a good thing going here and I'm so happy for them! 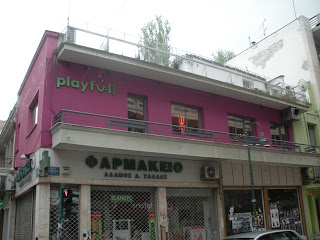 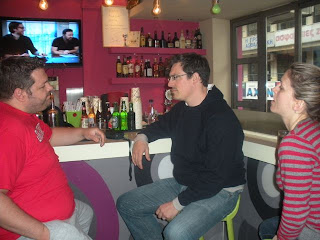 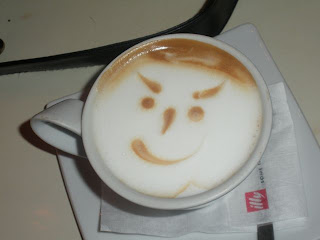 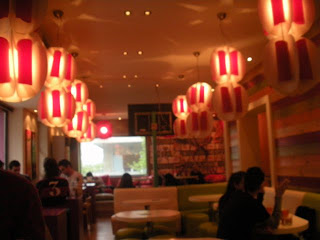 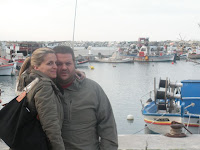 After leaving the coffee shop, we scooped up Yiorgos' awesome girlfriend, Alexandra and headed to an amazing restaurant in Platamonas, Greece named Psaropoula. It was right on the Mediterranean Sea and the weather was simply perfect; a bit overcast with a nice peaking sunset. We sat outside the restaurant for about 30 minuts and enjoyed a few beers before going inside. Our seat was right by a huge glass window that let us look outside at all the boats. We gorged. 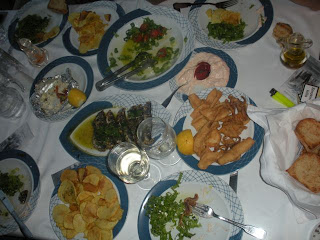 From the restaurant, we headed back home (~30 minute drive) and had more Johnny Walker and enjoying each others company before calling it a night.

Wednesday, April 11th
We all woke up around 9am and got ready for a full day. Today was the day that we were going to see Volli off. We ran a few errands and let Volli get a few gifts for his family before heading to Nikko's house to chill with Misty, Alexandra, and Cleo for a few hours.

From Nikko's house, we had to run a few more errands and then headed to the train station to send Volli back to his family. What a great time we all had! Yiorgos and Volli made it a goal to visit Ohio in 2015! We hung out in Romania first, now in Greece, next is Newark! I'm already counting the days... 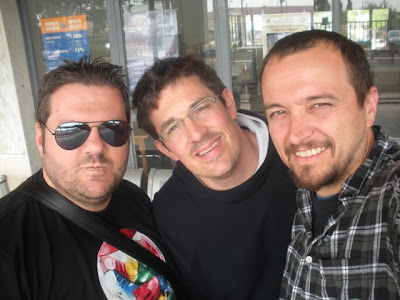 After dropping off Volli, Yiorgos took me with an authentic Greek Football Game (that's Soccer in English, people). :) It was simply AWESOME!! Larissa played Veria and the crowd was nuts. Everybody was yelling and screaming in Greek, and the referee's had waaay too much help. :) The game ended in a 2 - 2 tie and all the fans went on with their day undefeated. Great experience! Everybody should make it a point to attend a European football game. 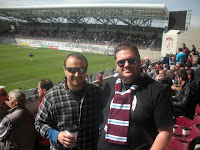 After the football game, Yiorgos and I picked up his cousin, Catarina, and began our 3 hour drive toward Athens. We arrived around 7:30 pm and dropped off Catalina with her boyfriend before meeting with some of Yiorgos' friends for dinner. We ended up eating at a very nice restaurant in downtown Athens by the name of Likiforos. Again, we gorged. It was great to be in the company of Yiorgos and his high-school friends. They spoke Greek at the speed of light, but took note to stop every now and then to speak English so that I could get caught up with the conversation. There were many times when everybody would speak English with one another so that I could be involved. I appreciated it, but also enjoyed listening to them talking in their native language. 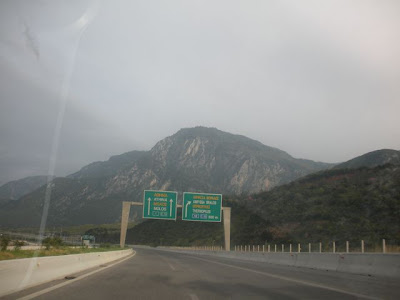 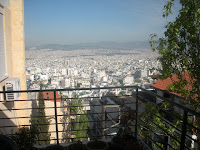 We ended the night back at Yiorgos friend house, where we would be staying. His friend's name is Dimitrious (ie. Micho's for short) and he lives on the side of a mountain overlooking the Athens city streets. He was very hospitable and let me sleep in his bed while he slept on a cot in the living room. He insisted, and I couldn't say no. Like most Europeans, he has been a great host!

Thursday, April 12th
Around 9:30 am Yiorgos and I woke up and got ready for a full-on tourist day in Athens. Yiorgos was going to be my tour guide and he was VERY cheap. :) We started the day off by Yiorgos showing off his impressive parallel parking skills. The only parking place for miles around was on a 90 degree vertical drop and he nailed it in one fail swoop... in reverse. BAM!

From the parking wizardry location we began the climb up to the Parthenon and enjoyed passing all the ancient ruins of the Acropolis. We took tons of pictures! Between Yiorgos and I we probably snapped 200 unique pictures. I have both sets on my Mac and will cherish them forever. 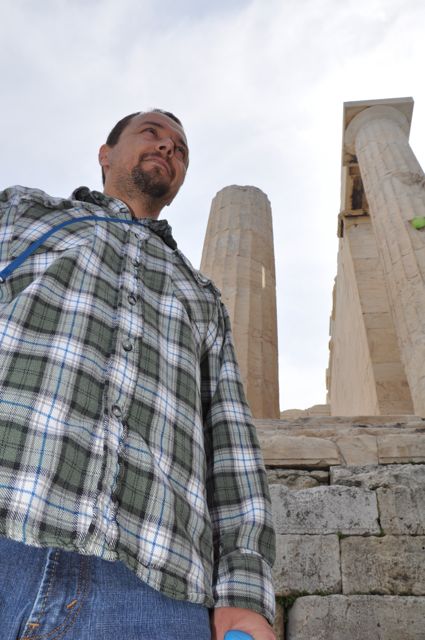 We were supposed to meet Bamma somewhere in this area. Her and I were both going to be in Athens on the same day. Knowing this, she called me the day before my flight and wanted me to deliver a package for her from the states. Yiorgos and I walked around the Acropolis for about 2 hours looking for her while we were snapping pictures. Just as we were about to give up, I saw a face in a crowd: 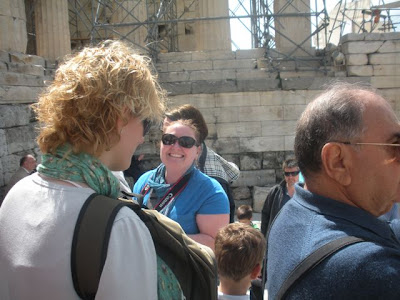 After I gave her the package, we hugged and went our separate ways. What are the chances that two ex-exchange students in the French exchange program from NHS would be crossing paths in Athens, Greece (half way around the world) at the same moment in time without using GPS technology or a solid plan for meeting.

Yiorgos and I continued our climb down the Acropolis and made our way through the streets of Athens. We visited many sites and just soaked up the day in Greece, enjoying each others company. The streets were crowded with people and shops. On our tour we passed down Ermou street where there were hundreds of gift shops, we stopped for coffee at an outside table in Plaka. We also visited constitution square, where demonstrations take place almost daily. From here, we went up to the Parlaiment and watched the guards switch shifts for watching the tomb of the unknown soldier. It was quite a site to see. It was very similar to the tomb of the unknown soldier near Arlington Cemetery. 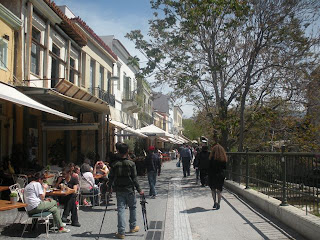 After watching the soldiers switch shifts, we headed toward the metro so that we could head back to the Acropolis where Yiorgos had his car (amazingly) parked on the hill. We got in his car and headed back to Michos house to get ready for yet another adventure at Eleni's house.

Eleni is one of Yiorgos friends that came to Newark with him back in 1998. At first I had a hard time remembering her, but as soon as I saw her I knew exactly who she was. The plan was to hang out at her house in Pireus (near Athens) and eat dinner. Her sister and brother-in-law came to join us and we all enjoyed each others company for about 3 hours. After dinner, Yiorgos and I headed back to Micho's house again and I began writing this epic blog post...

Tomorrow, we plan to wake up and drive back to Larissa so that we can enjoy the Easter holiday with the Valassis family. Rumor has it that we will eat so much food that we won't be able to walk. This is very similar to the last few meals that we've had here in Greece. I can't wait...

For now, this is my view: 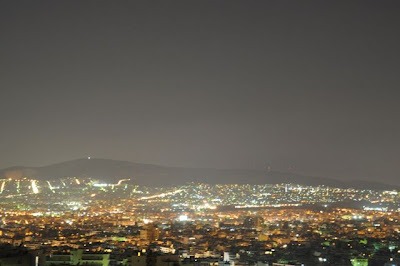 Dude!!! You guys are getting some serious grub on over there! I bet his Ohio State shirt is the only one in greece! Good stuff!