Today was yet another awesome day in Greece. I got to sleep in, relax, meet with friends, and relax some more. The night ended with an un-forgetful candlelit midnight celebration in downtown Larissa. I'll explain... 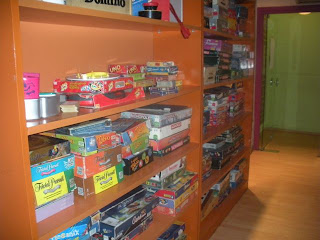 The day started off around 11am, when I woke up with a headache. This was the result of going to bed so late while still "under the influence". When I woke up, it was hard to get moving and I just sat around watching the BBC News channel with Yiorgos until around 2pm. It was around this time that Yiorgos and I headed into Larissa to run a few errands for his coffee shop. We got to visit a greek version of Sams Club where he purchased lots of items in bulk for the Playful Room. 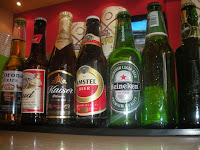 When we delivered the items to his coffee shop, we ended up chilling out and visiting with his friends. This was a great time! We basically hung out inside the coffee shop for about 4 hours drinking coffee and beer while talking and laughing with Thenassis, Thomas (a fellow computer programmer), Dimitrious, and Athena (Dimitrious' girlfriend). I got to see many familiar faces throughout the day and really enjoyed every passing moment.

To try and snap out of my funk from last night's partying, I decided to get some coffee. I ordered a double espresso and tried to let it kick in. I didn't feel the effects of it, so I ordered another double espresso... Yeah! About 10 minutes later I had the jitters. :) Yiorgos even asked me if I was sure I wanted the second one and I assured him that it was ok... "I'm a professional coffee drinker" I said.

I realized that I was jacked up on coffee the moment that I tried to debug a programming problem that Thomas presented me with on a small piece of paper. I couldn't hold the pen and my hands were shaking like crazy. I felt like I could just "exit stage left" and just run for miles without stopping. However, I was confined to a small stool in the middle of a relaxed environment with this pen and a piece of paper while everybody was focused on me and my coffee buzz... Bzzzzzz. :) 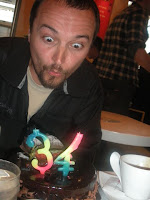 While at the coffee shop, Yiorgos surprised me with a cake and a celebration song over the stereo system. I was having a conversation with Thenassis and the music started to get very loud. I didn't understand why, and just assumed it was time to turn up the music in the bar...? Eventually I started listening to the words and it was saying "HAPPY BIRTHDAY, HAPPY BIRTHDAY, HAPPY BIRTHDAY TO YOU!" Then I got a clue and realized it was for me. About one second later I see Yiorgos coming around the corner with a delicious looking chocolate cake, and everybody in the bar (about 20-30 greeks) started clapping and singing happy birthday (in English). Needless-to-say, I was a bit surprised and it is a moment I'll never forget! I have been officially accepted by the greek community. :) I blew out my candles and everybody in the bar cheered. It was amazing!! We all shared the cake and I thanked everybody for the awesome present.

We stayed at the bar for about an hour or so afterward and just enjoyed each others company. Around 7pm or so, we headed back here to Yiorgos apartment and chilled out on the couch. I was able to catch up on my Facebook chaos (thank you everybody) and read my birthday wishes! It was great to see so many people's names on my wall who I'd not heard from in a long time. The one name I didn't see was NIKKOS VALASSIS though!! (j/k it's a joke). 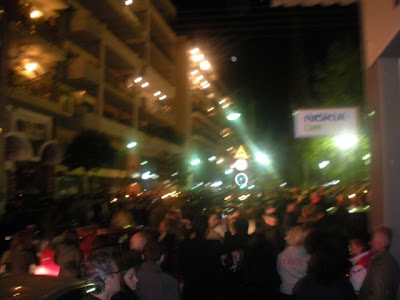 Around 11pm, Yiorgos and I headed downstairs to his parents place and picked up Nikkos, Misty, and Thenassis (their son / Yiorgos' nephew) and headed to the center of Larissa to celebrate the coming of Easter day. Everybody had a candle and we even took candles for those that couldn't join us. Yiorgos parents stayed home and Cleo was asleep, so Yiorgos and Nikkos carried their candles. I even had my own candle. I didn't fully understand what the significance was of this, but I went along with it. As we made our way to the center of the city, the streets were packed with people of all ages walking towards the center as well. It was quite a sight to see! We have nothing like this in America as far as I know... 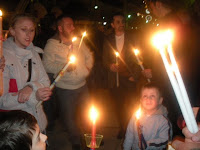 Let me first apologize if I get any of this wrong, but here is how I understood it from Nikko's description: In Greece, they celebrate an Orthodox Easter. The way that I understand it is that each Orthodox church sends their "high priest" (?) to Jerusalem to enter a cave where a holy light is burning. They enter the cave with a single candle each and no means of making fire (no matches, no lighter, nothing). When they exit the cave, the candle is said to be lit from this "holy light" that burns within the cave. They then fly this flame back their church and light other candles from this single flame. Those candles then light other candles, which light other candles, and so on and so on. This is considered to be the sharing of the holy light. So in essence, my candle was lit from a single flame that originated from the holy light cave. Pretty cool, huh? :) 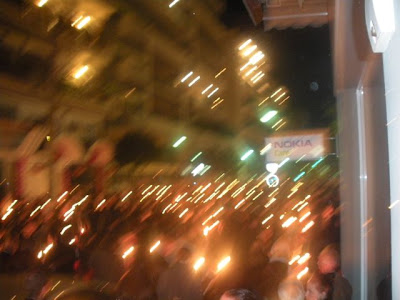 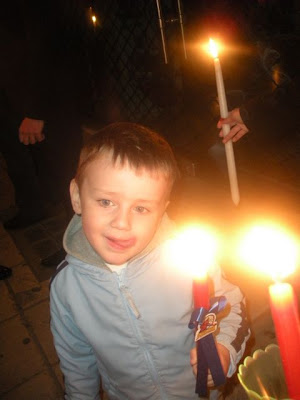 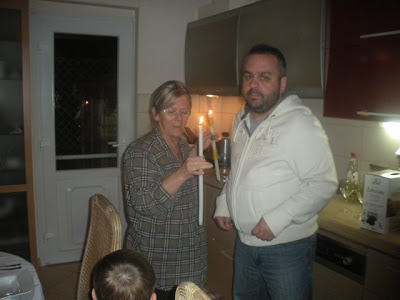 Watch this short video to see how big of a deal this Easter celebration is in Greece. When the bells ring everybody does a small prayer and kisses cheeks with those around them:


I was fascinated by it and was so happy to be a part of it.

Another aspect of the bells ringing at midnight, is that it signalled the end of their fasting. Yes, Yiorgos and I were not supposed to be eating meat all week... Whoops! :) So anyway, once the bells ring to signify Easter Sunday, all Greeks go back to their homes with this holy light and are then able to eat a "small" meal before going to bed... It's typical that they eat lamb on this night. 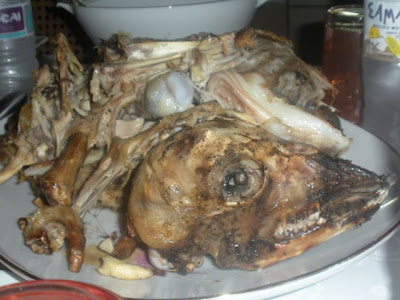 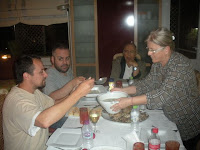 When we returned home to Yiorgos parents house, Dimitra had a lamb cooked and ready to serve at the dinner table. All of the lamb is used for this meal. Yes, all of the lamb. The head, the brains, the eyes, the heart, the stomach, the liver, the intestines, everything...  All of the organs, other than the brains and eyes were made into a soup, and it was served first. I didn't let the contents of the soup scare me and wanted to try it with an open mind. It wasn't bad, but I don't know that I'd order it at a restaurant anytime soon either. :) 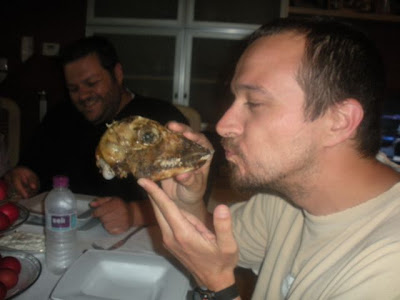 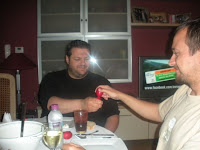 Another tradition is that everybody at the table takes a hard boiled egg and turns to the person next to them to bump them together. Whosever egg doesn't crack from this collision is said to have good luck. Both ends of my egg cracked... Crap! :)

Dinner was delicious, I had bread, feta cheese, tsatziki (a yogurt/cucumber/garlic spread), my bad-luck egg, and of course a few helpings of lamb meat. I washed it all down with two glasses of wine. Oh yeah, and I had an ice cream bar for dessert. After the small feast we sat around and talked... Greek family style. :) Loved it!! 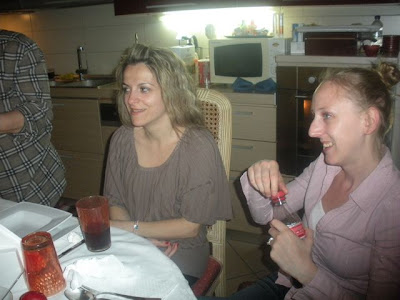