I did it! What a great experience it was too. Similar to my last marathon, I thought about downgrading my goal to simply "beat my last time", because 4:30 seamed like a far stretch. This was more than a half hour faster than my last marathon. This was 2 1/2 hours faster than my first marathon! Regardless, I stuck to my word and aimed for the 4:30 goal anyway. The end result was me running the best race of my life (so far). I walked away from this marathon (actually I hobbled, but...) I left nothing on the course and have a stellar PR to show for it!

I ran the whole race... meaning, I didn't walk a single step or stop for anything the entire 4 1/2 hours. I didn't realize that fact until after I crossed the finish line. Once I realized it, it really hit me that I'm getting stronger with every race. I can't believe how far I've come since I set out to be a runner last year. It feels very good.

Pre Race Training
My training had gone great up to the race. I was slipping up on my schedule of runs, but I was getting my miles in. My weekly routing was shot because I've been so crazy busy with everything new (new job, new projects, new schedule, etc...). I was able to fit in my 21 mile training run 2 weeks before the race. Then the week before the race I ran my World Wide Festival of Races 1/2 Marathon with a very nice time. The day after that race, I finally finished my 100 pushup test. Basically everything had fallen into place and I was in top-top shape (for me anyway) going into the marathon.

The day before the marathon, my dad and I cut down a huge tree in my side yard, so I had an intense full body workout and I was feeling it. After climbing trees with a chainsaw, cutting firewood, and then hauling wood and brush all day, I was sore. By the time I got to bed and fell asleep, it was almost 1am. I only had about 5 hours before I needed to head to the starting line for my 26.2 mile run.

Starting Line
I called Nick and Rob to try and meet up with them, but never got too. The starting line was absolutely packed. There was no way I was going to find anybody in that crowd. I literally found a parking space, pounded a gel pack and a gatorade and made it to the starting line right before the gun went off.

Miles 1-5
This was easy running! I was doing 9 minute miles with no problem. I actually felt like I was holding back at times. I knew better than to take off like a banchee and burn myself out too quick. The first few miles were very crowded. I was weaving in and out of people and moving aside for those that wanted to pass me. I literally forced myself to find my own pace and just relax. I hit every water station and took a gel pack at mile 4 so that I could begin my feul and hydration plan.

Miles 6-10
Again, these were easy miles. I was sill keeping my quick-but-relaxed pace of 9;15 miles consecutively. I was starting to work up a sweat so rather than holding my handkercheif in my hand, I decided to put it on my head so that I could just do some "hands free running". I must say it was pretty nice. :) I always run with a water bottle... always. Anyway, these miles were very uneventful and I was just enjoying the race atmosphere. Lots of spectators and lots of entertainers along the way.

Miles 11-15
By this time, the sun was out and it was turning out to be a beautiful day! When the 1/2 marathoners separated from us, the crowd thinned out a lot and I was running on an open road by myself for a few miles. I had runners about 30 yards ahead of me and 30 yards behind me. I was still keeping my pace pretty quick. I had let my miles get down to about 9:45 - 10 minute miles by this point, but I still felt strong and was very confident about finishing in under 4 hours and 30 minutes.


Miles 16-20
Here, I was starting to feel the regular marathon "pains". It wasn't necessarily pain, but rather I was feeling the things that runners feel when they run long distances. My hips were hurting, my shin muscles felt like they were separating from the shin bone, and my lower back was acting up from time to time. My abdominal muscles were pretty sore, but I'm not sure why. I've ran these distances before and never had abdominal muscle problems. The only thing I could think is that it was probably from the tree climbing the day before.

I called Jennifer around mile 19 to see where she was at. She told me that she was still at home! She hadn't left yet and I only had 7 more miles to go. To both of our surprise, I was kicking ass and was going to be done by noon at this rate. I couldn't wait to see my family at the finish line. The girls were going to make signs for me and just the thought of seeing them cheering me on at the finish line perked me up a bit. After I talked to Jennifer I put a little skip in my step for about a mile.

Miles 21-25
Ouch, I was really feeling the pavement here. I'm used to running on trails mostly and really don't run for such long distances on 100% roads. I'm not sure if it's the way I run or if it's just "running on roads" in general, but there is a big difference. I was really starting to slow my pace down through here. Putting in the faster miles at the beginning was proving to pay off. I did a few 11 minute miles and maybe a 12 minute mile. I was still on pace to beat my goal though, so I didn't let it get me down. I'm really kicking butt at this point. I saw everybody around me dropping off like flies. People were walking, some people were stopped along side the road stretching or sitting even. It felt good to jog by them knowing that my race plan was working.

Mile 26.2
I rounded the corner and headed down the hill to the finish line. I was looking for my girls with every step. There were probably 2,000 people lining the streets though and I couldn't find them anywhere. :'( I did hear my name on the loud speaker and was hoping that they heard it too so that they could find me running. I crossed the finish line in 4 hours 27 minutes 31 seconds!

My Reward
After I crossed the finish line, I hobbled around looking for my girls. I called Jennifer and she said that they were looking for me, but couldn't find me. I totally understood because there were just way too many people at the finish line. We eventually met up and all decided to eat at the Spaghetti Warehouse for dinner. Here is a picture of me with my trophy girls at the finish line: 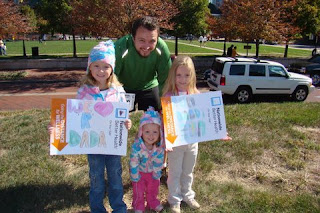 Time Off
This will be my last marathon of 2008. I'm going to take the rest of the year off and do some chill running with no set training plan for a while. I'll be preparing and planning my 2009 race schedule in the mean time and really hope to do more ultra's next year (no roads, just trail runs). This is my first year of being an official distance runner; I've ran 3 marathons and 1 ultra marathon. Not bad for a rookie!?

Nice job, Luc! Your running has been coming along great lately. Great job with running non-stop!

Great Job Luc,
It was a great day out there. Too bad I messed up my foot.

As Rob has told me: "We are all Rookies".
I think I'll be an Ultra Rookie for a while.

It's heart warming to see your kids supporting you like that. Great family picture.