As most of you know, I spent most of April and May in Virginia for work. I missed the family terribly, but got a lot of work done and was actually able to do most of my training with zero guilt of compromising my "family time". It was very much like the time Rocky went to Russia by himself to train for his big fight with Ivan Drago in Rocky IV... 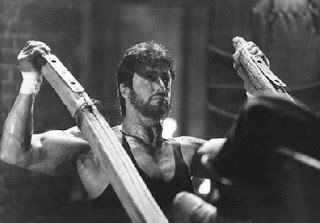 Maybe? :) No, but seriously I did do the grunt of my training while in Virginia and came home about 10 lbs lighter. I ate right, ran hard, worked hard, and stayed busy.

So I guess the purpose of this post is merely to wrap up my time in Virginia. I got to do a lot of fun things, but pretty much stopped posting my experiences at some point. This will be a hodge podge post! Here goes...

Colonial Yorktown
We were very close to the old Yorktown. This place has a lot of history. This is where Cornwallis ultimately surrendered to George Washington in the American Revolution back in the 18th Century. We got to travel to the battle ground and see the mounds. The city has done a great job preserving the area. You could really feel the history there and could almost envision the battle taking place right in front of you.

Here are some pictures from our visit: 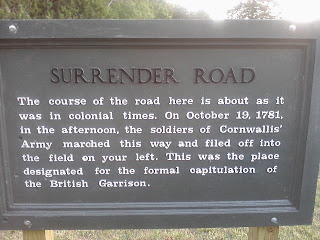 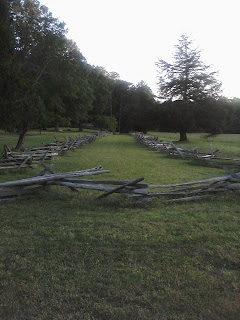 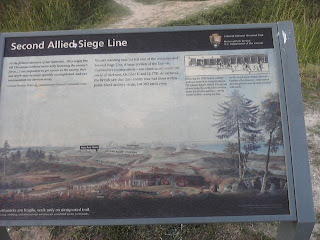 If you go to Yorktown, VA... Eat at the Yorktown Pub. It looks like a little hole in the wall (and I guess it is), but it is really good food and has a great environment by the water. We gorged on seafood (I had shark for the first time) and we all drank some local beers from the area. Highly recommended!

Norfolk Naval Port Beauty
This whole area is beautiful. I stayed in Hampton, VA (near Newport News). Norfolk, VA was a few miles south of me, and Yorktown and colonial Williamsburg was a few miles north of me. The Chesapeake Bay was a few miles directly east of where I was. While my immediate location was mostly the business district of Hampton, I had all kinds of beautiful places surrounding me.

One evening we took a bottle of wine and our appetites over to a colleagues house and enjoyed an evening of laughter and delicious food at Ian and Sandra's house. Before dinner, Ian and I took a walk down to a local store to get some more wine and I couldn't believe the beauty of the area. There was literally a HUGE battleship parked about 500 yards from their house. Needless to say, I took a bunch of pictures and soaked in the moment. The sun was going down and the weather was perfect. If I had to live in the city, this is where I would live. Here are some pics to try and put it into perspective (noting: these images do it NO justice): 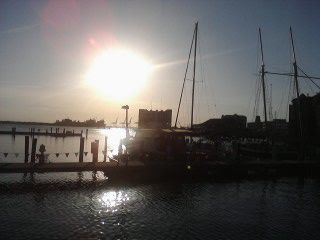 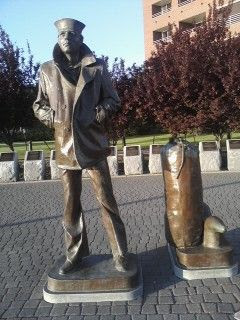 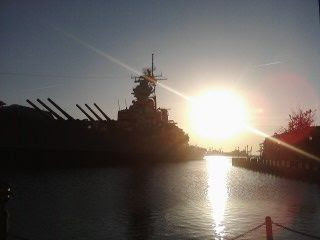 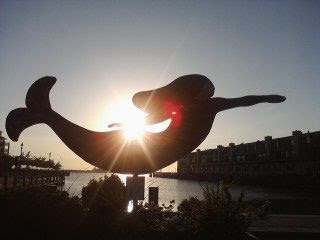 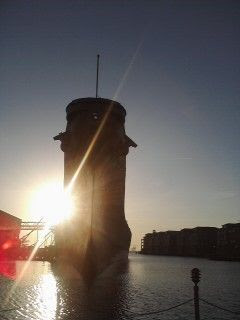 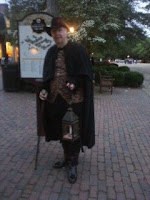 On May 13th (ie. Friday the 13th), we took a haunted tour around old Williamsburg, VA. The tour started at 8pm sharp and went into the night. It wasn't as "scary" as I wanted it to be, but I guess I had a different type of "ghost tour" in mind. Our tour guide (Fred I think) took us around the streets and told us of various stories of the area. Yes, people have seen activity in these areas, but (no) we saw no action. :) The tour took about 1.5 hours and we learned quite a bit about the area. Unfortunately (almost a month later), I've forgotten most of the information. :) If you find yourself in Williamsburg, VA and have an open evening, I recommend taking the Haunted Williamsburg Ghost Tour. It was fun and very informative. 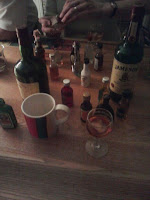 One evening last month, we all went to a colleagues house for dinner and drinks. Ok, lots of dinner, and lots of drinks. The gentleman's name is Terry, and his wife's name is Fred (short for Winifred). Terry is one of those guys that when you meet him, you won't soon forget him. His voice is distinct and his character is hard to match. I doubt Terry ever meet a stranger that he didn't like. He's just a great guy and fun to be around. It is always fun to talk with him too because he will bring out some crazy phrases that make you stop and think. Things like: "This thing was no bigger than a pimple on an elephants ass" or "This gal would cut off her nose to spite her face to prove a point". :) These are actual sayings that I heard from this man. He treats everybody with respect and stops what he is doing to help me when I have moments of unclarity with the legacy system I'm coding against... yes he's an old school punch-carder that understands "geek-talk".

Anyway, the reason for his mention here is that he accomplished an amazing feat a few years ago. While we were all sitting on the back porch enjoying his and Fred's company, he began to talk about his "motorcycle ride to the arctic circle" on his Gold Wing. He started in Virginia and drove up across the United States, up to Alaska and into the Arctic circle... Then he stopped for gas, turned around and drove back. Wow! He did all of this to raise awareness for an amazing cause: Inoperable Brain Tumors. 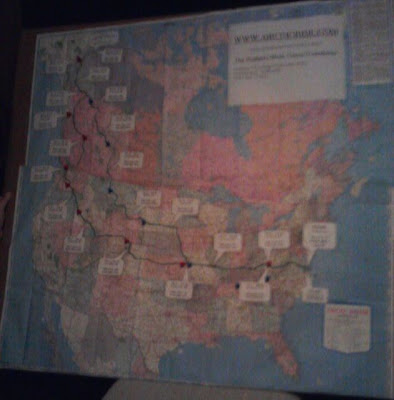 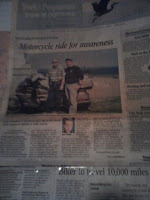 There is a story that I found on the internet that tells about it here:

It was neat to hear all of the stories from his trip. He said the Arctic Circle was the scariest part of the trip and he almost laid his bike down with only a few hundred miles of his destination (in the middle of nowhere). That would have been bad. Anyway, I just wanted to share his story, because it fascinated me as an "endurance junkie". I couldn't imagine enduring that much asphalt on two wheels for all those weeks.

Mariners Museum Park
This is a location that was about 7 miles from my hotel. One Saturday morning, I set out to tour the park on my long run. I was scheduled for a 26 mile run. The plan was to run there, explore for 12 miles, then run back. Of course, I picked the hottest day of my stay to do this. The run to get to the park was mostly busy roads. I was able to run along a paved path for about 2 miles, but after that, I was dodging oncoming cars and running along grassy embankments to avoid getting hit.

Of course when I got to the park, it was all worth it! The entrance alone was worth it: 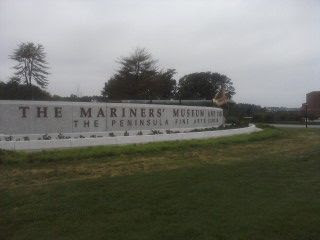 Once inside the park, I found the 5 mile loop that weaves in and out through a cacoon of trees alongside the lake. The entire loop was padded with crushed limestone, so my VFF's were a perfect choice. The trail was exactly what I'd hoped it to be. 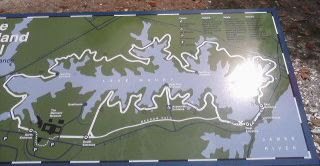 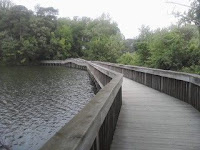 Along the loop there were about 15 total bridges. Some were more extravagant than others, but each had their own beauty that let them sit right into the trail. I'm very happy that I was able to see this park before I left Virginia. Thanks for the recommendation Terry. :)

Here are some random pics that I took on my run: 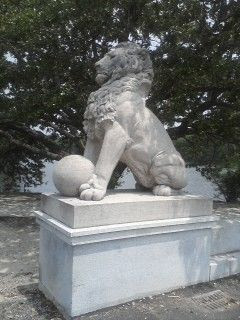 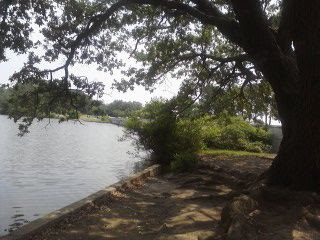 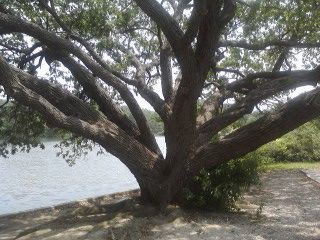 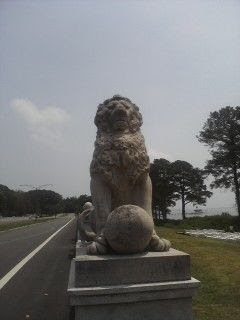 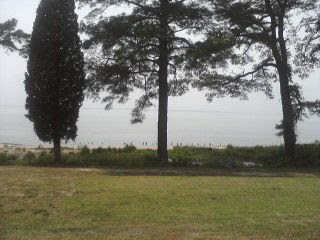 Conclusion
I had a great time in Virginia. A lot of work got done, and I was able to see what it is like to live out of a hotel. :) I kind of liked it, but at the same time it was boring and mundane. I couldn't imagine how horrible it would have been had I not been able to come home those two times in the middle of the 6 - 7 week stay. Virginia is a beautiful place and I'm very grateful that my job has allowed me to travel there to work with such great people.
author: Luc @ 10:48 AM 1 comment:

This is really cool:

Forget the PR from Samantha Goresh on Vimeo.

Skype to the Rescue

I was having some major withdrawal from seeing the girls. I talk to Jennifer every day either online or on our cell phones, but I've not been able to see or talk to Lizzie, Jazzy or Daizi in over a week.

This morning, I was getting ready for work and was able to do a video chat with them while I drank my coffee. 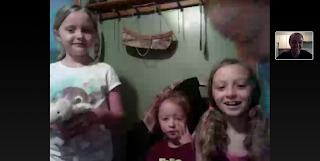 It was only a 10 minute video chat, but it was just what I needed. I got to hear all about their last couple of days of school, and most importantly I just got to listen to them giggle and be silly. <3