This race could also be known as the 2009 Dan Brown Marathon. I ran this race with an old buddy from high school... you guessed it, Dan Brown. It was his first marathon and I told him I'd run it with him. He offered me his basement to stay in the night before so that I didn't have to drive to the starting line from all the way out here the next morning. Awesome!

The night before the race, Dan and I hung out at BW3's and had a drink with his brother and a few of his close friends. We were celebrating Dan's journey to get to where he was today; he trained hard for this race and overcame a lot of other things during his training for this marathon. It was great to hang out and catch up with him and meet his family. From the bar, we went back to Dan's and crashed. We had an early morning to wake up and head to the starting line. 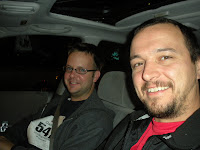 The alarm went off at 6am and I was ready by the time Dan yelled down to wake me up. We made a quick stop at McDonalds and got ourselves some McGriddle sandwiches and coffee. The traffic near the starting line wasn't as bad as I remembered it from last year or even the year before. However, the foot traffic was INSANE. It was just a sea of people everywhere you looked. Turning into the parking garage was quite an adventure; I basically had to inch my way through a crowd of people ignoring the traffic signals. We parked the car and headed to the starting line.

We got to the staring line around 7 am and stood around trying to stay warm and stretching out our legs until the gun went off. The race started at exactly 7:30 am, but we didn't start moving until about 5 minutes later due to the mass amounts of runners in front of us. We crossed the starting line at 7:38 am and were off and running. 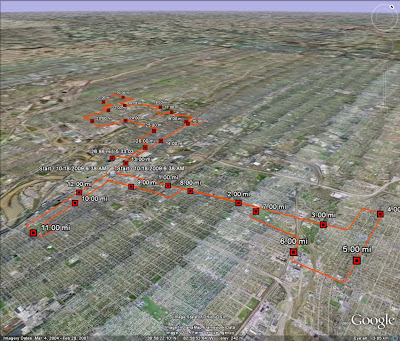 Miles 1 - 5
The first 5 miles were very easy. We were doing 11 minute miles and keeping the pace pretty steady through here. It was very cold this morning and neither of us had gloves. We were just chugging along and laughing hysterically at times along this stretch. At one point I realized that all this laughing was going to catch up to us as the day went on, but we couldn't help it. Everything was funny. :)

Miles 5 - 10
Around mile 5 or 6 our hands were freezing. This section of the race actually ran us through the same section that we already ran through, so there were a lot of clothes laying on the ground from runners shedding layers the first few miles. I actually found a pair of gloves on the ground and put them on. Instant relief!

Dan on the other hand found a pretty pair of pink gloves. :) However, his gloves actually had some heat packets in them and they were warm. He totally lucked out on that find. Each of his gloves had one of these heat bags in them, so he gave me one and he kept one. I couldn't believe how good it felt to let my hands thaw out with real (hand held) warmth. I would switch hands every so many miles and it was an amazing change to the race. Warm hands made all the difference.

Miles 10 - 15
We were still rocking through here. We were laughing a lot and I could actually feel my stomach muscles getting sore by this point from all of the laughing we'd been doing the last 2 hours. Around mile 12, the 1/2 marathoners split from the full marathoners and it was a welcome change of pace because it really thinned out the crowd. It was also nice through here because the spectators were everywhere and they really boost you up. Dan even admitted that he considered walking at one point, but someone said some words of encouragement and he kept up his pace. This shows the power of crowd support. It was here that we ran up on Nick and his buddy Bret too. I heard "LUC!" and looked around to see Nick standing there with a camera in his face snapping a picture of us. I knew Nick was going to be out on the course, but wasn't sure where. We traded some high fives and kept on moving. Good luck in Javalina, man!!

Miles 15 - 20
Through here, we were still kicking butt. We had been running the entire time and hadn't walked at all up to this point. At mile 18, Dan pointed out that this was his longest run ever. He had done an 18 mile long run 3X in his training for this race, and every step from the 18 mile marker was his longest distance. We had 8 more miles to go to finish this race, and it was obvious that we were gonna do it with flying colors.

Miles 20 - 25
We were still kicking butt through here. Dan was really feeling the pain through here, and I was feeling the stomach muscles burning. Yes, we were still laughing even after all these miles. The entertainment along the course needs a mentioned at this point. There were still bands every so many miles, and it was great to hear the different varieties of music. We heard "She talks to Angels" by the Black Crowes a few times on the course, not sure why this particular song, but we did. We also heard Hang On Sloopy a few times, the OSU fight song and many other songs. It never got old and as a musician, I totally appreciate the effort that went in to bringing out the amps, generators, setting up, and actually playing through the cold. This is a great race, and the volunteers, musicians, and spectators have so much to do with it.

Miles 25 - 26.2
This last mile and a quarter was very tough for Dan. He had been kicking royal butt through this whole race, much better than I did at my race. Our pace went from consecutive 11 minute miles down to 13 minute miles. The beauty of this was that we were STILL RUNNING! His kids came out and pumped him up a bit and I could tell that it helped big time. He was hitting the wall, but took it very well. My job at this point was to just keep him moving and our motto was "Don't walk when you want to, but when you have to". I had honestly never heard it before, but when I said it to him earlier, he remembered it and recited it to me, so it was our "motivation" now. :) 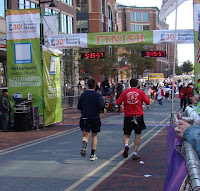 I had called Jennifer and coordinated with her what time we were going to be crossing, as she had brought the girls out to the race. I couldn't wait to see them all! Jennifer came last year with the girls, but they weren't able to see me cross the finish line. This year, they had gotten there in plenty of time and were anxiously awaiting our arrival. As we inched toward the finish line, I saw them along the side and ran over to slap some high fives and told them all how happy I was to see them. I then jumped back into the race so that I could finish and go give them all big hugs. 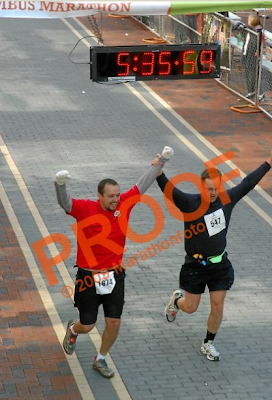 Purchase your picture at MarathonFoto.com :)

Our times were as follows:
After the race, Jennifer and I took the girls to the Spaghetti Warehouse for some carbo loading. The girls were all there with metals from my previous races. I loved it!! When I finished, we all had our metals on and actually wore them into the restaurant like a bunch of marathon runners. 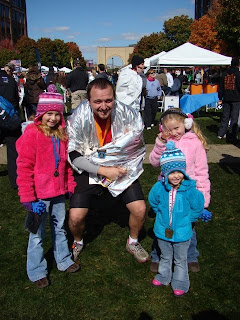 What an amazing day this was. Before I started this race, I considered it being my last Columbus Marathon, but after todays experience with Dan, I remembered all the great things about it and may just be back next year if my health permits it.

Thanks for a great time Dan and congratulations man!! You're a marathoner, now let's get training for the Bobcat Trail Marathon... in 2 weeks!! Yer an animal man!
author: Luc @ 9:07 AM

Great job running with your buddy for his first. I know it helped me running with my buddy this past weekend. He will always remember that you were there for him.