Update: Friday - November 6, 2009
My blog was read by someone and it got back to the employees working that day. This is good. I honestly looked for a place to provide feedback on their site, but couldn't find the location. The power of blogging came through in this case, and I'm grateful.

Around 4:30 pm today, I received a call today from the Manager of the store who was working that day. She deeply apologized for the service I received, and was extremely sincere. It was a great welcome to such a bad experience. She admitted that she put her trust in the Assistant Manager to be polite and treat the customer (c'est moi) with due respect. She was busy at the time and didn't notice how I was being treated. I don't fault her. Thank you for the call!

The Rant:
Some days I just want to scream and let the world know that it's heading down the wrong path. Why is society so rude anymore. I don't know if it's because I live out in the sticks now and don't deal with people as much, or if the world is really getting ruder each day. I'm leaning more towards the latter...

I took my little girl, Daizi, with me to town this evening and needed to visited our local Radio Shack inside the Indian Mound Mall in Heath, Ohio. An Assistant Manager really fired me up, and I've may never step foot back in this particular store again. I'm still very upset about the whole ordeal, and instead of letting it fester inside of me all night, I decided it was best to just vent my frustrations here on my blog. If you're in the mood for a good rant, keep reading. If you're not, then look away and wait for my next post. I'm sure it will be a happier post and have a meaningless subject (like most of my other posts).

Ok, so let me first start by saying that Diazi saved the day and let me keep my dignity in this unbelievable situation. Let us pause for a moment of country girl cuteness. :) 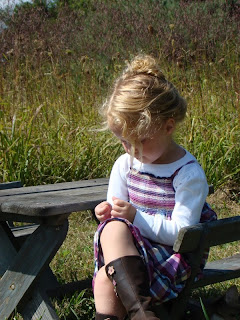 Thanks for your help today, Daizi!

Now onto my rant... Before heading to Radio Shack, I looked online for the number and I'd read that it was a rude location, but I decided to try it with an open mind. Once I'm done with this entry, I may write my own review in hopes that somebody else reads it and avoids public ridicule and rude service like I received today. I was extremely insulted, but left with a fake smile and very red face. If Daizi wasn't there to keep me cooled down, I really think I would have yelled at the guy and stormed out of there. I say this because at one point, I truly considered snatching my equipment from the guys hands, telling him off, and walking out with my opinion being well known. However, I decided to cool down and just focus on how cute and well behaved Daizi (my 3 year old) was being the whole time.

Here's a quick overview of what happened (mostly for me): I walked in to the store with a mission to ship my laptop back to the manufacturer for repair. As I walked in, 3 employees were standing around laughing about something. Nobody else was in the store, and I had clearly broken up their fun time. The moment I walked in the store with my laptop and my little cow girl, the faces all turned somber and serious. The one girl said "Hello, how can I help you?" and I greeted her back and began to tell her what I was there for...

Immediately the Assistant Manager took over my request because he's trained in this sort of thing (or something). However, he did so in a manner that proved to me that I was being a nuisance and wasting his time. As soon as I explained my case, he said "Well, I'm going to need your tracking number...", and I said "Absolutely." as I began to open up my planner to read it to him. He was surprised that I had it with me because he sighed and began punching keys on his computer while he literally ignored me for the next 2 minutes. Everything I said from this point on seemed like a rant to this guy. He treated me like I was being an unreasonable customer. I wasn't!

The thing that burns me the most is that I was actually in a very good mood up to this point and was cooperating with everything he was asking me to do as politely as possible. After standing there for almost 3 full minutes, he interrupted his extended silence stating that he couldn't send my power supply back to the manufacturer. I very politely corrected him saying "Actually, the support tech said that I would need to send everything back in order for it to be serviced...". The guy LITERALLY lifted his eye brows and said "Okaaaaay" as he turned around to get something. I almost spoke up and yelled at him and his boss. Amazingly, his boss, (ie. the manager of the store), did nothing! She just kept on about her business and ignored the fact that this guy was treating me like crap. I almost asked for my power strip back and bid them both a good day. However, I just stood there in shock and let him ignore me for the next 5 minutes while he navigated his computer system some more.

The entire time I was there, I never got a smile, a thank you, or anything else. I left there feeling like I had just done something wrong. From Radio Shack, I took Daizi down to the bathroom and on our way back I looked in the store. The 3 employees were all standing around smiling again... with no customers... again. I'm sure they were talking about something funny. (?) They will soon be out of a job at this rate. I know that not all employees of Radio Shack are this way, but this guy ruined it for me today.

It seems that you described the service...in most of the stores in Russia :)))
Btw: I've visited Radio Shack for several times in Polaris Mall in Columbus, Ohio. And I am very pleased with the service:) They understood my poor English very well and provided me with everything what I needed. I still use the devices which I bought in Radio Shack..

Luc, I know you fairly well, and I can tell you, I don't believe you about the Radio Shack People......kidding!

Dude, not cool. I swear I get the same thing and sometimes it drives me crazy. I am in a good mood and people will act as if I was on a warpath.
You did nothing wrong. Actually, what you did was make these people do their job which they clearly didn't want to do.
That's why these people have the jobs they do becuase they couldn't make it in a real job.

BTW: What an adorable picture of Daizi.

you are probably an ass and are not telling the whole story. I work at radio shack and have to deal with assholes all the time. Either that or your a cheese ball that couldn't stop talking about his daughter. Then again I am from the n.w. and probably have nicer people than the mid west radio shack. The people at best buy will charge you for what is free at radio shack. Make sure to bring cash because the geek squad doesn't talk with out it.

by the way dick/nick. Radio shack is a real job. Someone has to help with electronic needs. Some of us go to school and radio shack helps us by being cool with the scheduling. You probably have lived off mommy and daddy your whole life. Thats why you make comments like that. People in poor countries would love to have the opportunity to work and go to school. You are probably a fluffer boy.

You are wrong Mr. Anonymous! That was the whole story, and nothing was over exaggerated; I made sure of it. Also, you don't know a thing about me. I'm not an ass, and I never mentioned my daughter at Radio Shack. Please don't prejudge or call names to people you don't know.

If you work for Radio Shack, then you did no favors for my opinion by commenting and calling me names on my blog. I find it ironic that you wish to comment as anonymous with such harsh words. I didn't agree with Nick at all on his comment about a "real job" either, but decided to leave his comment on here, as we are all entitled to our opinions (right or wrong).

Your article has a full of learnings,please take time to view my site imarksweb.net. Thank you and God bless :)