Reality set in this week when I was getting back into my daily routines around the farm. I realized that the Columbus Marathon is in 2 weeks and I'm not trained at all. It's cram time. 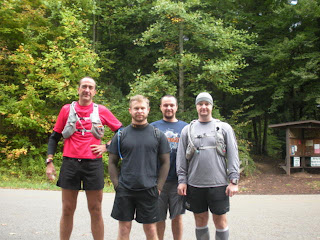 Today I met up with some friends @ Mohican for my first real long run in a long time. At 8:30 am, I met up with Nick and his buddy Bret, who will be pacing him at the Javalina Jundred in a few weeks. We waited around for a while and eventually another runner by the name of Luca showed up and was going to be joining us. Luca ran the inaugural Mohican Forget the PR 50k earlier this year. We all took off around 8:45 and we were going to be doing a modified version of the Red / Green loop. I was here for an 18 mile run today. 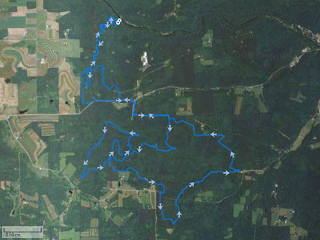 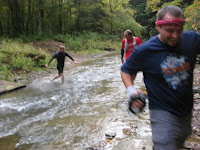 We started very slowly up the red loop and did mostly walking through here because it was all uphill. From there, it was just smooth running all day. No problems at all, all day. I felt very strong out there today. It was great to be back at Mohican. I hadn't been there since June, when I DNF'ed at the 50 miler. I forgot how great it was to run real trails; not Blackhand Gorge trails, or Dillon Trails, but Mohican Trails. There's just something about Mohican... When running Mohican, you don't didn't count miles or hours, you just put one foot in front of the other. We all just jogged and talked all morning. Great times!

Around mile 10 I realized that I ate my last gel pack and I was officially out of fuel. I showed up today wanting to get in 18 miles, and I was pretty sure that I could do the remaining 8 miles with just my water bottle. Around mile 14, I realized that I was back on empty though and I was running on empty for the last 3 miles out there today. Bret was battling some old knee pains, and I must say that my knees were a little sore as well because I was really letting gravity pull me down the downhills as fast as possible. It felt great, but my knees were paying the price. The last mile was pretty slow going. I was out of fuel and Bret was in some pretty bad pain, so we just walked the last few hundred yards very slowly since it was mostly downhill anyway. 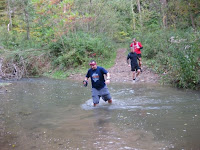 Nothing too exciting happened today actually. We had a few river crossings and they were pretty cold. We ran past a couple of horseback trail riders, and we even helped an old couple find their way back to the covered bridge. Other than that, it was just a fun run at Mohican.

Nicks friend, Bret did a great job out there today. He does most of his running on the treadmill and he kept right up with us the whole time. A few times, I would forget that it was his first trail run here at Mohican. I could so see him joining us in the future. It was fun playing word games with Nick and him out there today. For example: Je was juffing and puffing up those jills. We jad a jell of a good time jelping jim prepare for Javalina Jundred. Jilarious! :) Good luck Nick and Bret!

Luca was a funny, funny dude too. He moved here from Italy a few years ago and he's very new to running, like me. He started in late 2007, a few months after I started running, and he's running marathons now too. We had a lot in common and not just the name. :) He's actually running Columbus in 2 weeks as well, and I hope to see him there. He's pretty tall so I should have no problem finding him.

We all ended around 1 pm with a nice 17 Mohican miles in the bag. I'm already looking forward to next weekend. I plan to be bringing an old friend with me and introduce him to trail running on the Orange loop. ;)
author: Luc @ 8:15 PM