This may appear odd, since the race report is being posted a few days before the actual Forget the PR 50K race, but there's a reason for this. The reason is that the race director (Rob Powell) is cool enough to allow the volunteers to come and run the course a week before the "official" race takes place. For this particular run, Rob promises to:

"have a poorly marked course" and offers "water and terrible aid"

However, the event was absolutely awesome in every way. I wouldn't have changed a thing about it!

I'll admit: I almost didn't run this race. I was on the couch all day Saturday with a box of tissues guzzling cup after cup of hot green tea. I never get sick, but this day I was sick. When I woke up at 5am on Sunday morning to get ready for the race, I felt like crap. I stood up to walk into the kitchen and got really dizzy. I got a total of about 3.5 hours of sleep. I still had a headache. My face was all stuffy with snot. I could only breath out of my mouth. I had heartburn from the meds that I took the night before (which I never take medicine either). Most of all, I just felt weak. I needed more sleep. I actually went back to my bed and laid down. No way could I run 31 miles today... 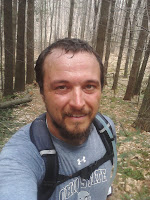 As I laid in bed, I thought about how ridiculous it was to even consider NOT doing this run. The 1hr drive will wake me up. The fresh air from Mohican forrest will help my sinuses. I'd probably sweat the sickness out of my body. The heartburn will be solved after the first mile. And my legs will be throbbing with pleasure after the run... All signs were actually pointing me to get up rather than lay in self pity. I got up and had a change of mood; I decided to fight the negative thoughts with positive ones... Glad I did!

I didn't know what type of weather to expect so I dressed warm and hoped for chilly weather (long sleeve & long pants). I screwed up on that one. :) It turned out to be the hottest day of the week; 80+ fahrenheit. Oops. This would actually help me sweat out my cold though, so there's another way of looking at it. :) I decided to show up and treat this as a slow 30+ mile training run rather than a race. I wanted hills and time on my feet. After all, it's called "Forget the PR". Therefore, I decided to use my CamelBak as my portable aid station. I had it swelling with a bladder full of day-old water that I filled the evening before. I had some apples, bananas, napkins, Vaseline, and some extra nip-guards. I didn't know what to expect in regards to aid, so I packed for the worst...

The drive up was dark and foggy. We all gathered around the starting line around 7:25, for the 7:30 start. Some of the finest racers were there: Rob, Mark, Kimba, Cheryl, Michelle, Paul, Jim, Glenn, Terri, Bob, and (of course) Myself. :) Rob quickly briefed us all on some tricky areas and handed out some maps to those that needed them (myself included). There were some new trails being ran on this run, so I took a map and listened very attentively to his instructions... At one point, Rob interrupted himself in mid-sentence and said "Oh... go!". We were off! :) 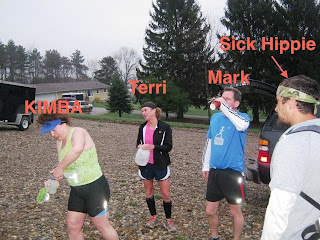 I should also add that I wore my VFF's and got some crap for being a "hippie" from my buddy, Kimba. :) For those that may recall, I wore these shoes last year on this run and ended up in pretty bad shape after the run. It was my first time running more than 5 miles in them at that time and I did some pretty nasty damage to my feet & legs as a result. Since then I've done most of my runs in them, minus Oil Creek and the snowy/icy runs this winter.

The course was great. It's quite different from last years course due to some downed trees from recent winds. The course was 2 loops, so we had to do everything twice. Well, except for the Purple loop; we only did the Purple loop on the first time around. Also it started at Mohican Adventures Campground this year, and also had a new section added to the course. Rob decided to throw in a funny joke around mile 3 this year which he calls "Big Ass Hill". Yeah. I was completely winded about 1/4 way up the first climb of it (which we had to do twice today). Once we get to the top of the vertical ascent, the course meets up with the old Red/Green loop where we immediately go back down the other side of "Big Ass Hill". When you get to the bottom of that, you go back up another hill. Ouch. 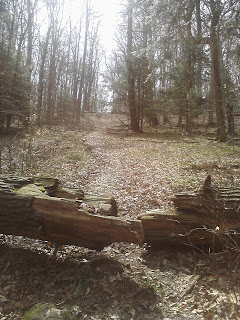 There were a few times where I got to run with a few people and it was great catching up with them. For the most part though, I just kept to myself for the majority of the run. A few times I'd bump into others, then I'd let them trot ahead of me. I enjoyed shuffling through the woods and hills in silence with nothing but my own thoughts... 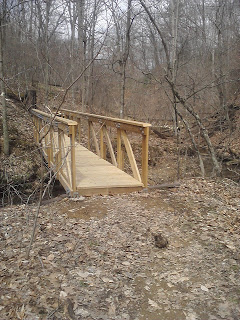 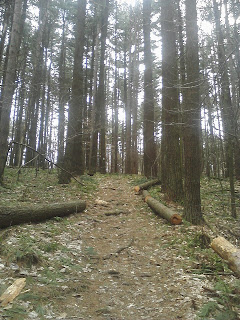 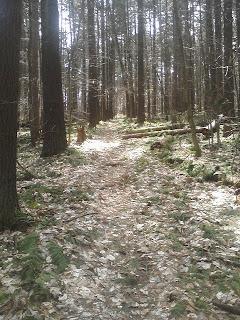 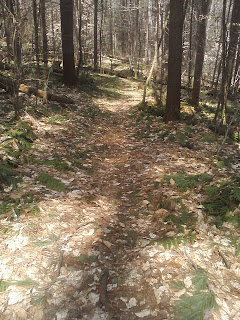 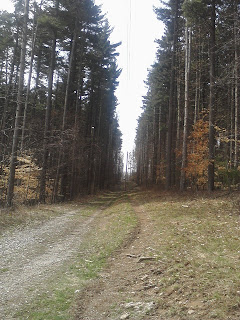 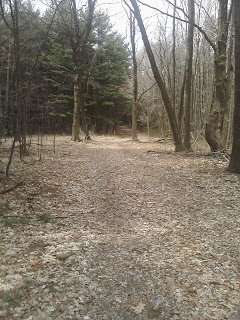 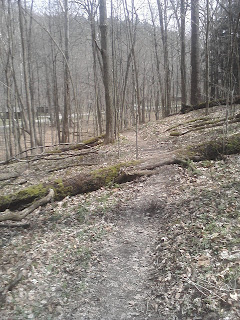 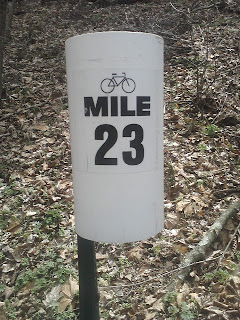 Oh, here comes a huge and deserved shout out to our rolling aid station, Ron Dukes. Ron drove all over Mohican State Park with his pick up truck and provided cookies, snacks, water, and other fuel for us runners. He always greeted us with a big smile and a gallon of warm water ready to rehydrate us. We were all so thankful that he came out and did this. A few times I stopped and enjoyed his conversation before heading back out onto the trail. Thanks a bunch, Ron. See you this weekend!

The run was oddly relaxing. It got really hot around noon, and my clothes were saturated with sweat. Even though I was dressed for winter on a hot summer-like day and trudging through the forrest, I felt great. I ran out of energy a few times, but kept moving toward the "next downhill". The heat didn't bother me too much... If anything, it was good training for the 100 miler. After all, it's going to be much hotter in 2 months for the Mohican 100. Although, I'll be wearing much less clothes for that run. :)

My favorite part of the race was the finish. I was the last of the 50k runners to cross the finish line and all of the other runners and attendees of this race came out of the conference hall and greeted me with a tunnel of cheers and high-fives. It was a finish that I'll never forget! Thanks everybody! I felt like a sweaty first place finisher. Hopefully my energy depleted 100 meter sprint to you all looked half-way believable. 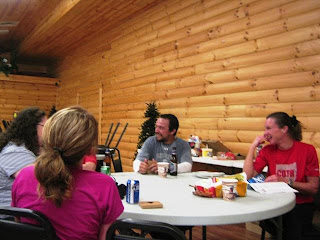 The post-race meal was spectacular. There was beer and lasagna (thank you Betty Baun) for all of the runners. Rob handed out our t-shirts and the 50k finishers all got fancy belt buckles. Rob explained some last minute details for next weeks logistics, then we all sat around and had conversation for a few minutes before departing back to our normal lives. 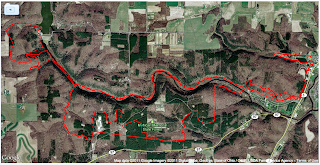 Mohican Forget the PR 50K is a great race with great views of a great park that is always accompanied by great people.
author: Luc @ 8:31 PM

Can't believe you had on long pants and a long shirt on the hottest day of the year!..LOL..nothing like sweating away that cold. Nice job brother Luc! Looking forward to this weekend.

Nice race report and nice photos.I know where all those spots on. I *heart* Mohican.
I hope you did sweat that cold out with those clothes on!finger

Thanks for the report! I am glad I got a preview of the run ahead of time. I'm new to trail running, new to the hills that this course has to offer and this is my first trail race, EVER! I signed up for it in the fall thinking that I needed a goal to look forward to for the spring :) I'm doing the 25K this weekend. See you there!

I know the feeling when you go back to bed and it just motivates you to go run. Good to hear it worked out for you.