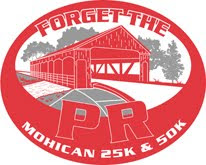 What a crazy weekend.

Note: Sorry I had no camera. All pics below are courtesy of Nick Longworth's Facebook album. Thanks buddy! :)

The weekend can be summed up with:
Friday night, my flight landed at midnight. I drove up to Mohican State Park and made it there by 2am. My good buddy, Farley had already setup camp and he let me crash in his tent. The alarm went off at 7:30am and we got ready to start preparing the forrest for tomorrow's race.

The first half of the day was a mostly logistics and getting things setup at the Start/Finish. We went through and packed the different aid station supplies. Synced up spreadsheets and did a few printouts to ensure that the runners would have a smooth checkin the next morning. It was pouring down rain for most of the morning. There was a small patch of sun that snuck in there, but for the most part it was raining in buckets and then it was sprinkling (off and on). Yuk.

We broke for lunch at Pizza Hut and gorged like trail runners. :)

After lunch, we all split up and did our own course marking duties. Farley and I took the trail from the Covered Bridge back to the North Rim Trail. This section was pretty easy to mark; there was one turn and the rest was just a long trail that winded along the river. Not a whole lot of flags were needed on the single track trail section, so we gave some extra attention to the river crossing. We used enough flags to ensure that the runners knew how to get into the water and how to get out of the water, and back on the course. We probably used 1/3 of our flags at this section alone. The remaining 3 miles simply followed the river so we would just drop a flag every so often so that runners knew they were still on course. All in all it was a 'no brainer' though.

Around 2pm or so, Jennifer came up with the girls and we were going to try and hang out a little bit. The plan was for them to help with little odd's and end's and just be together. The truth was that I've not been home all week and won't be home for the next couple of weeks, so we just wanted to find some time to hang out. What better place than Mohican. :) However, as it turned out, she decided to take the girls over to play putt-putt golf and let Farley and I focus on our course markings. It turned out to be the absolute right decision because it got pretty gross out on the course and the girls wouldn't have had much fun walking for 3+ miles anyway.

Farley and I just hung out and did a lot of laughing. We talked about all the different ways we could totally sabotage the race with the amount of lime and flags we had (ie. turn left! now turn right! go in the river! now come out!). :) We played it cool though and tried to be adults about it. :) 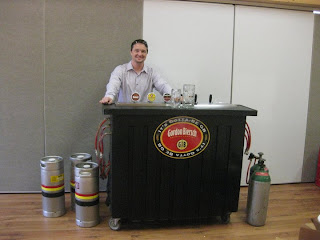 When we got back to the Start/Finish we all had some nice frosty beers on tap, compliments of Nick. There was a really nice girl there by the name of Samantha, who was doing some audio and photos for the race. She was interviewing various people about the race and who they were. Nick and I decided to let her interview us together. Nick was half lit and I was feeling goofy from the few beers I had. I'm anxious to see how it turned out. :) I tried to sound as unbuzzed as possible, but we'll see... :)

Around 9pm, Farley and I decided to take a night run through Mohican with our headlamps. We started at out campsite and I took him up Big Ass Hill and we made it most of the way to the Fire Tower before turning around and heading back to the camp. We ran about 8 miles total and had a great time. It was Farley's first night run through the woods, and it was my first time doing that since I paced Kimba back in 2008. Farley and I got back to the campsite, cleaned off our funk and crashed by around 1am.

I froze this night and simply could not get warm. I was pleasantly surprised and relieved once I woke up and learned that my feet weren't going to have to be amputated from frost-bite. It was a horrible nights sleep on a cold hard ground! But it is Mohican and the complaining ends there. :)

The alarm sounded at 5am and we fought the snooze button a few times before getting up and out of there for a 6am volunteer shift at the Start/Finish. Farley was on parking duty all morning and I was on t-shirt duty. The runners all came in and got registered in a frenzy. I saw so many familiar faces and it was great to just be surrounded by so many trail runners. 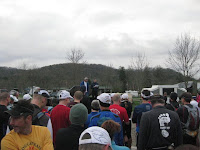 Before the race started Cassandra McCune got up and spoke a few words about her husband, Mike McCune and his legacy that will live on here at Mohican from now until forever. He was a passionate, passionate Mo runner and he was missed dearly today. As Cassandra talked, it was dead silence. She told about who Mike was, not just to the running community or Mohican, but who he was to her. I don't think that there wasn't a dry eye in the crowd. I had a good cry as she talked. She really did a great job introducing Mike to those that never had the pleasure of knowing him. Mike was there in spirit for sure; you could feel it. Thank you for such a great opening ceremony to the race Cassandra. 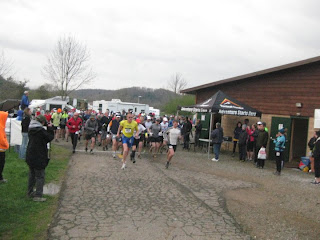 Farley and I headed over to the Covered Bridge. I was working the Course Marshall duty again, and Farley was there to lend assistance to the Mansfield Running Club. We got to meet some really cool people at this aid station. I also got to see some familiar faces from last year's volunteer group. What a great atmosphere the Covered Bridge is... It is the heart of most all Mohican running events. Many of the trails meet here and runners pass through here multiple times in most events because of it's location.

This year, Rob threw in a nice river crossing and it was awesome to watch the runners belly aching and anticipating the freezing water. The line of the day was when one runner said.. "But there's a perfectly good bridge right there!?!" It summed up the logic of having a river crossing... it's just what us runners like to do for no good reason. :)

About half way through the race, I went back up to the Start/Finish for some technical support on a small little computer app that I built for keeping times. They were having some troubles with it, so I handed over my orange vest and spent the remainder of my day at the Start/Finish greeting runners and doing odds and ends for Rob and other volunteers that needed assistance. I met a lot of really great people here. One runner (named Seth) introduced himself and claimed he reads my blog from time to time. I didn't ask how he recognized me, but I assume it was my crazy shoes. :) If you're reading this Seth, it was great meeting you and perhaps we'll cross paths again soon. Thanks for reading these silly ramblings. :P

While standing there greeting the runners, I realized that I was spent from lack of sleep and really got to missing my girls. I wasn't much use to Rob anymore (sorry man) and I decided to make an executive decision to drive the hour home and spend some quality time with my girls before having to travel back to Virginia in the morning.