Ok, so I left you hanging in my last post when I mentioned our room in Ft. Lauderdale... Our room was supposed to be on the 4th floor with a beach view. As it turned out, we got to the hotel too early. Apparently they were cleaning the carpets in our room, so we had to settle on a lousy 9th floor beach front room instead! :) Darn. So we got to our room and checked out our stellar view before heading down to the beach. 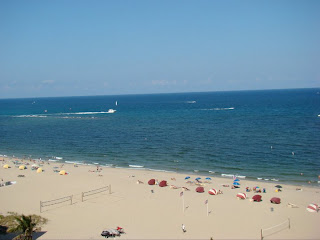 The beach front view from our balcony 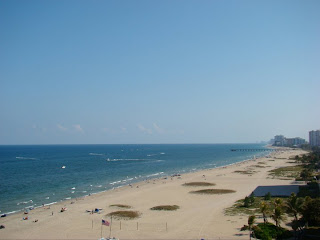 Remember, we had already had a full day at various places across the Florida Everglades on our drive from Naples. So once we got to our hotel room it was pretty uneventful; we walked down to the beach, swam at the pool, ate a nice dinner, went to bed.

That next day, we all woke up and had our breakfast down in the lobby. Immediately after breakfast, I drove the rental van to the airport to return it to Hertz. I took a $20 bill, my iPod, my sunglasses, and a cell phone; I was going to run from the airport back to the hotel in the mid-day Florida sun. The run was great... hot, but great. I got to see a lot of Florida on my little run. My plan was to run north, up the A1A Ocean Front Blvd. back to our hotel. It was a 30 minute drive, but would be a 3 hour run back. 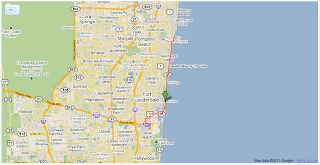 My route from the Airport, down the A1A

One key thing that I took away from this adventure was that it's pretty hard to get out of an international airport on foot. All roads in and out of the Fort Lauderdale International Airport are constructed for efficient traffic flow to and from the highway through a series of on and off ramps. I had to navigate through the parking garage and through a few terminal tunnels to get down to the ground floor, then I had to run against the grain of traffic that flowed into the airport on a 2-lane utility road out to another road named 'Perimeter Rd'. This road followed the train tracks that wound around the runway and under the maze of highways that led in and out of the air port. I cranked the iPod through here because it was pretty loud to say the least. :) 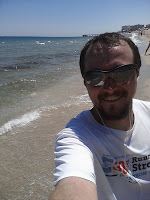 Once I got out of the airport congestion, I made my way up to the A1A and just enjoyed the sights and sounds of the busy streets. At point I got to climb and descend a toll bridge that seamed like the highest point in Florida when I made it to the top. I could see for miles and actually took a video that I sent to Jennifer. From the toll bridge, I weaved in and out of some residential areas and then strolled down the public beach area. Best yet, it was a Saturday afternoon, so the beach was BUMPIN... but so was the sun. I could write another 4 paragraphs about this run and all the cool sites I saw, but just know that I ended my 15+ mile run in the sand, along the beach where I fell into the ocean once I reached my girls. :) 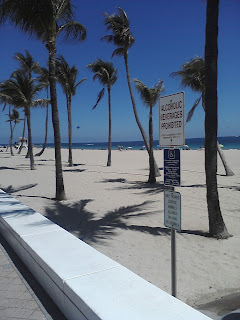 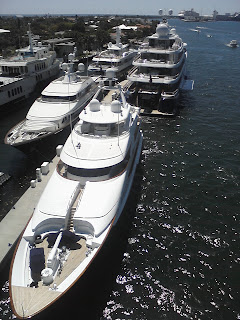 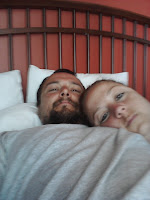 After the hot run on the asphault, we all swam in the ocean for a while, then we got some food before heading out for some shopping down the road at the local surf shop. From the surf shop, we all walked back to the hotel along the beach. After the walk, the kids were pretty well spent, so we got back to the hotel and just chilled out for a while. We ended up eating candy bars and chocolate for dinner before everybody kind of fell asleep where they were. I, for one, fell asleep on the too-small-for-a-grown-man couch before waking up and stumbling to my bed. 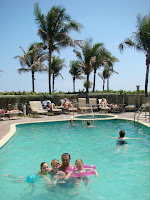 Sunday was pool day. We pretty much spent all day at the pool or in our room. Lots of lounging around in between pool time and meals. This was our "recovery" day in a sense. Around 6pm or so, we decided to take some family pictures down by the ocean. Jennifer packed the girls matching dresses and she MADE me buy some nice clothes at the Gap store in Naples for this particular event as well. :)

We all headed down to the ocean during the sunset and took about 200 pictures of various poses against the sunset and with the ocean behind us. They turned out great and we will have these pictures forever to remind us just how much fun we had on our Florida trip. The girls were all sun-kissed and the breeze was coming off of the ocean pretty strong. It was neat to feel how warm the sand still was on our barefeet even after the heat of the day had gone. These are all things that we don't get to experience too often in Ohio. 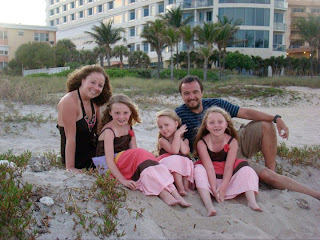 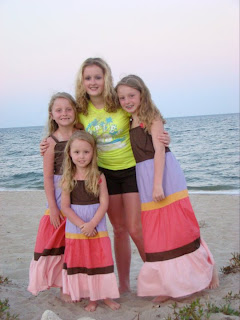 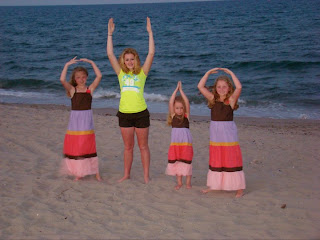 After our photo shoot, we went down to the pool again and the hotel had a complimentary viewing of 'Despicable Me' by the pool after the sun went down. We made it halfway through the movie before we all realized the breeze was too cold on our hot skin, so we decided to go back up to our room and watch a Netflix movie on Jen's MacBook with popcorn, Coke, and more chocolate. 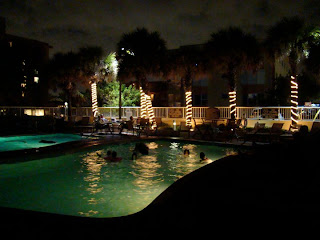 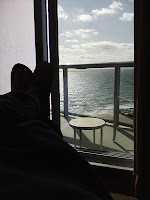 Monday morning, Jennifer and I woke up to watch the sunrise, and then we went down for breakfast (no kids). :) It was much less chaotic without having to manage all the plates and drinks. After breakfast, she went back to bed and I read for a while. Eventually I tried to wake the girls up, but Lizzie was the only one that actually woke up. Her and went down to breakfast and just hung out for a while. The others kept sleeping. After our little "Daddy & Lizzie" time, we brought some waffles and drinks back up to the room for the others. Unbeknownst to me, they were already eating breakfast (ie. Chips Ahoy Cookies). :) Ain't vacation awesome!? 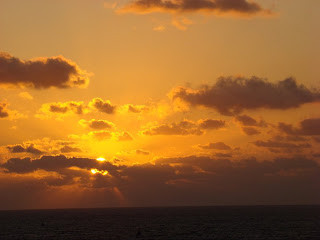 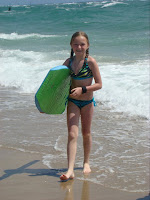 Once everybody had their breakfast, we decided that today was going to be "beach day". Lizzie and I rented some boogy boards and decided to "catch some gnarly waves duuude" while all the others played in the sand and found sea shells. We were literally at the beach ALL DAY. We got there around 11am and left around 6pm. We broke for lunch at some point at a nice little beach side Tiki Bar, where we all had Pina Colada's and burgers in the shade. By the time we got back to the hotel, we were all spent! We ordered Pizza and leisurely packed our bags to dance music on the FM radio. Everybody got their showers and prepared for the long venture home that next morning. 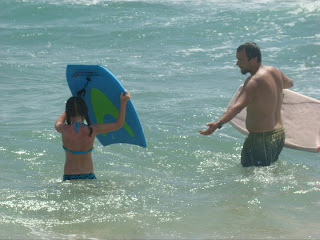 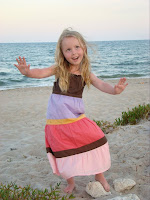 Ok, so I have to tell this side-story real quick... After we were all done eating our pizza, the girls were being extremely silly up in the room. They were laughing, telling corny jokes, and just being crazy. At one point there was a quiet moment; almost an "awkward silence". Then Daizi leaned back in her chair, put her hands on her belly as if she had eaten too much pizza, and says "Oh... I'm sooo prednick!" (ie. I'm so pregnant). We all lost it! I think she's been hanging out with Jazzy too much. :) 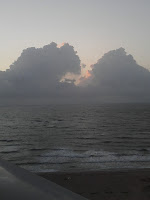 Tuesday morning was pretty uneventful. Lizzie and I tried to wake up to see the sunrise, but it was too cloudy. We lasted about 10 minutes on the balcony, then went back to sleep. About an hour later, we all woke up and ate breakfast before checking out of the hotel. On our way to the airport, I asked our cab driver to drive us down the A1A so I could show everybody the sites that I saw on my run. He gave us some history lessons and "local facts" about the sites and dropped us off at our terminal. 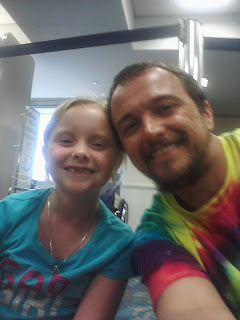 Jazzy and Me relaxing at Ft. Lauderdale airport

We made it to the airport ontime, but when we tried to check-in, we learned that our flight was delayed due to nasty weather north of Florida. We were supposed to fly to Washington DC to Columbus and be home by around 4pm. As it turned out we went through Charlotte, NC (which also got delayed) and then got on "stand-by" for a Columbus flight around 8pm. We got into Columbus around 10pm and we were happy to be back. One cool thing about the flight into Columbus was that Mr. Craig Krenzel himself was on our flight. I (personally) didn't see him, but Jennifer did and so did many people on the flight. :) He may not be a HUGE celebrity, but he was absolutely a "household name" for a few years around here. Go Bucks! 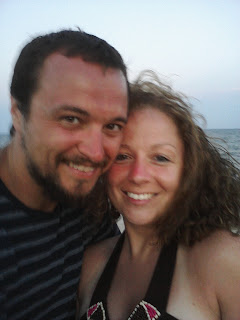 There you have it! This was the 2011 Hardbarger Family Vacation. We all had a wonderful time and made memories to last a lifetime. We will soon start planning our next big adventure... (?)
author: Luc @ 10:02 PM

That sounds like a wonderful vacation! And what a great view from the room - an amazing mix-up :)

Dude! Love the Vacation Report, Part 1 and 2!
And the pic of you all, with the hotel in the background, in this post, so lovely. This needs to be in your living room.
You've had great family adventures in the last couple of years with the family-they will remember these forever!