Long, but fun day today. Woke up at 7:30 am and ate a relaxing breakfast down in the lobby. My hotel actually has an amazing breakfast selection. I get to eat breads, meats, cheeses, and eggs every morning with orange juice and coffee. The waitresses are very friendly and they are always so surprised when I bring my dishes up to them after I'm done eating. I think I'm supposed to leave everything at the table, but it makes them smile and they seem to treat me better every morning because of this. I'll continue to do it each morning. I think they appreciate it too, so... :)

I made it to Bob's around 8:30 am and we hung out for a while drinking coffee and just relaxing before opening the laptops. This pretty much defined the rest of the day though. We simply hung out and bounced ideas off of each other about features and changes in a complete no-stress environment. It was great to just speak up and bounce an idea off of Bob from time to time in between long running compiles. I don't get this luxury at home while I'm in the basement and sometimes spend too much time over thinking things. A lot of progress was made today.

Around lunch time, we headed to a really nice Pizzeria restaurant named Due Mila. Bob and I both ordered a pizza and some apple juice. About 45 minutes later, we found that we were the only ones in the restaurant talking... the owner actually came out and told us that they were closing the restaurant. We had to leave. :) While some might be proud to "close the bar", we were actually pretty proud that we got to "close the pizzeria". 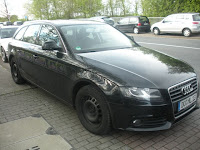 From here, Bob and I drove down to pick up Michelle's car from the shop. This meant that Bob would drive her car back to the flat, and I would get to drive his car. I'll admit, I was a bit nervous, but anxious at the same time. This was the first time I've driven a car in another country (besides Canada). There were a few times that I had to rush through a traffic light because I had NO IDEA where I was and couldn't afford to let Bob out of my site. :) There was another section where we drove along a rail road track in the middle of the road, and I thought I was going to get rear ended by a train. As we got closer to Bob's flat, the roads got a little tighter and I was concerned that I would scratch his car. However, I did fine we made it back to the house safely without incident.

We worked and strategized til around 7pm. At this time, one of Bob's friends came over and we enjoyed a few beers on the back porch. His name is Heiko and I'd heard so much about him for many years. There were a few times when we almost met each other, but due to schedule conflicts, we could never quite be in the same place at the same time. It was nice to finally put a face with the name. The weather was great and we all sat out side and had a great time talking and laughing.

After Heiko left, we enjoyed a delicious spaghetti dinner. Michelle had cooked spaghetti, garlic bread, and salad for dinner. We also shared a bottle of red wine from Cologne. Michelle and I talked race strategies and shared various running stories and so forth. I'm very excited for the race this weekend, and I can tell that Michelle is too. I can really feel her excitement and nervousness when she talks about it and I love it! Tomorrow we're all planning to drive the full marathon course and pick up our race packets. 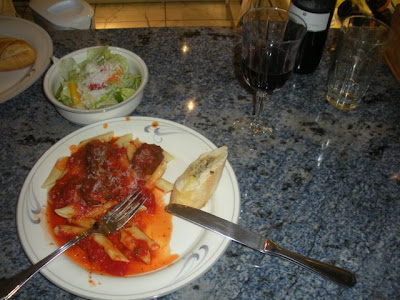 Shortly after dinner, Bob and I had to attend an online sales meeting. These meetings are really cool actually, because we get together over Skype and have video chats from all over the world. Kevin calls in from London, Patrick calls in from Paris, Bob and I called in from Dusseldorf, and Steve called in from Chicago. Technology is simply amazing.

Once the meeting was over, I headed back to my hotel room and was able to chat with Jennifer for a while before she had to go to her Volleyball game. She's been very busy with the girls and I think it helps her (and the girls) stay busy and not think about how long I've been away. 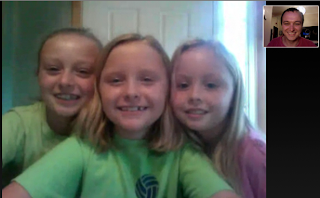 Tonight was their last game and it's unfortunate that I didn't get to see all their games. Jennifer told me that Lizzie has been doing really good and that Jazzy is able to serve overhand now!! <3 I can't wait for them to show me all they've learned when I get home. I really am missing them a lot. Especially at night when it's quiet and they're out enjoying their evenings doing fun things. Rumor has it that they are finally getting their pigs tonight! I'm anxious to hear what they name them (ie. Pork and Chop? Link and Patty?). :)

Now I'm surfing through channels deciding which news is old news and which news is new news. Basically, I have two options: MSNBC or CNN. They are the only two english speaking channels on TV in my hotel room. :) I've heard all the latest world news in English and all the stories are now re-runs of the same stories I saw earlier. Last night, I actually got caught up listening to some french news channel. It let me know how much french I've forgotten. I understood about every 23rd word or so.
author: Luc @ 5:45 PM