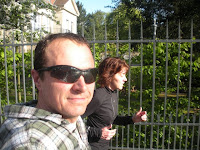 Today was an amazing day. I woke up @ 7:30 am, and met Michelle (Bob's wife) for a fun run around the park near our neighborhood. We ran ~3.5 miles through Rhein Park. It was a very fun and relaxing run. Michelle is running the first leg of a relay team this weekend in the Dusseldorf Marathon. She's been training for this for a while now and is very excited (and nervous) about it. I'm excited for her and know she's gonna kick butt! It was an abolute joy to run with her this morning and I hope we will do it again before I leave. 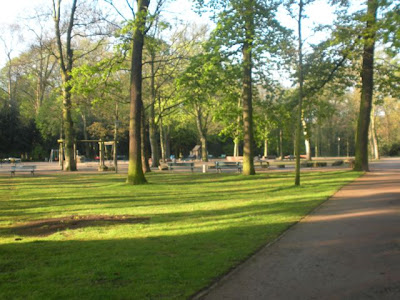 After the morning run, I came back to my hotel for a quick shower and to eat a nice breakfast before heading down to Bob and Michelle's flat to begin the work day. We got a lot accomplished today and I really enjoyed working one on one with Bob at his home office. He and I are more alike than some might think. He's an uber geek about computing and I'm an uber geek about computing; we really make a great team when we get together and... well, compute. We think alike, we talk alike, and we are both pretty laid back about most everything in life. 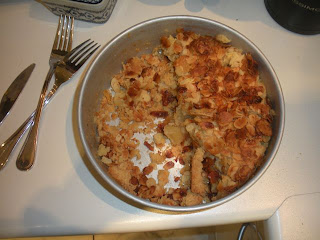 The amazing "Apple Cake" dish that got devoured during lunch today.

Fast forward to 4pm, we cut our day short due to some conflicting schedule issues. He had an audition to attend for an upcoming concert where he will be playing guitar in a band at a local festival. Yes, my boss is a rock star. :) I on the other hand, was planning to meet with an old classmate at a local pub.

Ok, so when I arrived in Dusseldorf, I (of course) wrote a post about my first day here in the city. The post was shared on Facebook through FriendFeed, and a blast from the past (named Nick Mockus) contacted me stating that he actually lives here!! I remember seeing this a few years ago when he and I became "Facebook friends". However, I forgot overtime about this fact, and was so excited when he contacted me with this little reminder.

Nick graduated a year after me in 1997. We never really "hung out", but we knew each other through mutual friends and of course the French Exchange program when we travelled to Paris, France together in 1996 (16 years ago)! Oh wow... this makes yet another alumni of the NHS French Exchange program that I've been able to catch up with here in Europe in the last 2 weeks. Remember, I ran into Bamma in Athens, Greece 2 weeks ago). Madam Waite, eat your heart out! :) 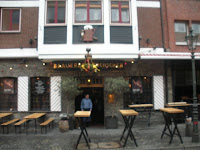 Nick and I met at a really cool pub / brewery by the name of Brauerei im Füchschen in the old Altstadt district. The bar was on an old cobble stoned street and we drank beer after beer after beer and just "caught up" with one another at a table outside on the street. My high school days were a bit different from others, and it was great to know that he and I were able to remember so many times we spent together during those years. Especially knowing how different our lives were back then; he was a HS football star (though he'd contest that statement), and I was a HS band nerd star / extreme socialite (which I simply can't contest). :)

As it turns out Nick still plays football for a National Football team here in Dusseldorf. His passion for football has not changed over the years and he's now considered a hometown hero in some of the locals eyes, I'm sure. When I asked if he's known by any of the locals, he humbly (and shyly) told me that someone did ask for his autograph on the street once. :) We talked about lots of things, and I discovered that his school / work brought him over here in 2008. He then decided to take up residence here two years ago. He loves the country and I see why; he blends in well with all the laid back locals.

It was simply awesome to meet up with Nick and talk as though it hadn't been 16+ years since we last saw each other. I caught him up on my journey, and he caught me up on his. I enjoyed every passing second tonight and hope that we stay in contact more often. We plan to get together again before I head back over to the States. We left with the promise of getting ahold of each other this weekend or early next week. I'm honestly already looking forward to it!! Thanks for an awesome evening, Dr. Nick. :) See you soon!! 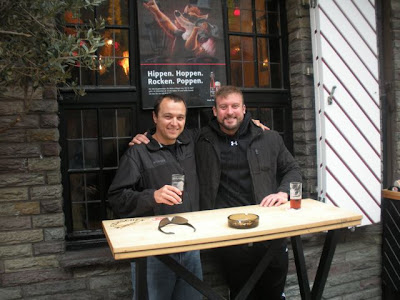 Me and Nick enjoying beers and memories. 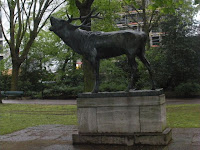 On my way back from the bar, I stumbled through the Hofgarten (a nearby public park) and just walked around the park taking some pictures and enjoying the birds chirping (in German). I'm now back in my hotel room and getting ready to catch up on some work that got cut short earlier today.