Immediately after waking up, I called Bob and told him I was "running late" (ie. just woke up). He made light of it by giving me a hard time. He then assured me that it was no big deal and encouraged me to take my time and get a nice breakfast. I obliged with a plate full of eggs, a turkey sandwich with cheese, a small cup of fruit, an orange juice, and a coffee. I arrived at Bob's house around 8:30 am, and we started our day off very slowly and made it to the Dortmund office around 10 am. 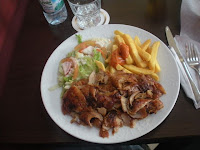 The morning was filled with work related stuff... Around 1 pm, we headed to a nearby restaurant named Divan Gastronomie. I had the "Chicken Kabob" which was nothing like an American "kabob". It consisted of a plate of fries and salad topped with grilled chicken flakes. It's hard to explain, but it was really good. I took a picture, but (much like the German country-side), the pictures do it no justice. :)

After lunch, we headed back to the office and did more "work stuff". A lot of progress was made and some amazing code was written today. :) We left the office around 7pm and headed to a local italian restaurant named Risorante Bei Marija. This restaurant was probably my favorite restaurant that I've been to so far. It was relaxed, authentic, simple, and everything was exquisite in every way. 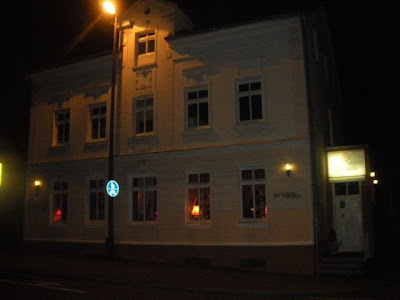 When we walked in, we were literally the only people in the restaurant. The lighting was dim, and the setting was extremely warm and welcoming. We sat at a corner table and decided to order "the menu". This meant that we would be trying everything on the menu in stages. To understand this, know that the menu consisted of about 6 or 8 dishes and was literally written on a small chalkboard that the waitress carried with her to our table to take our order. I (personally) have never been to a place like this before, and loved the idea that this what they served. No more, no less.

The options consisted of various dishes of fish and pork, various pastas like tortellini and other authentic Italian pastas, tuna salads, and a few other dishes. Unfortunately I can't remember them all due to the two bottles of red wine and the few shots of (damn-near) grain alcohol shots that we had. The waitress, who I'm sure was native Italian, but spoke fluent German, arrived at the table with three shot glasses and poured shots for us at some point. She insisted they were on the house in either Italian or German (I couldn't tell by this point), and we all pounded them down and then tilted our heads to the side with a big painful look of joy on our faces. Yowzas!! 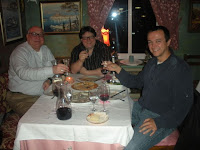 We hung out at the table for a while after dinner and enjoyed more wine and some great conversation. I got to hear how different life can be in Europe from those who know first hand the lifestyles of Americans. Patrick and Bob are both very much experienced in living life in both the States and in Europe. It was really cool to sit and hear the differences from the two countries and do my own comparisons as to what is important to me; as a parent, a husband, a son, and as a computer professional. I love the lifestyle over here, really I do, and it's nice to know that if Jennifer and I really wanted to make it work over here with our kids, we could.

Better have a mother-in-law suite for grandma H.