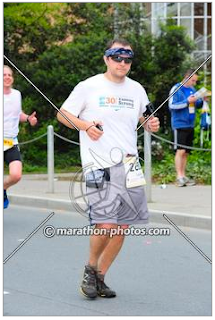 Today was an amazing day! I woke up at 7am and got ready for the Dusseldorf, Marathon (race report to follow). I ran the marathon faster than I've ran any other marathon before (a PR) and then came back home and relaxed for about 5 hours on my bed... I couldn't move much more than that, so I didn't try too much. :)

Around 6:30 I headed down to Bob and Michelle's flat so that we could all go out to dinner with their friends, Bill and Peggy. As it turns out Bill and Peggy are both American as well. I also discovered that Bill works for Delphi, and was once an employee at the Kokomo, Indiana plant. What are the odds that I've been there before, years ago. My dad has a friend that used to work for Delphi in the IT department and he took me into his office when I was still very "green" with programming. What a small world we live in.

We all hopped on a train and headed to a nice restaurant named "Orgie" (yes you read that right). It was a very laid back atmosphere and the food was absolutely delicious. I ordered the white asparagus meal with shnitzel. We all drank beer and finished off a bottle of wine. It was great to just sit around and talk about nothing for 3 hours. The chef was right beside our table and there was fire and brimstone flaring in the window which lit up the entire restaurant from time to time. What a cool atmosphere this was. 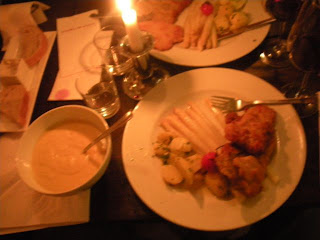 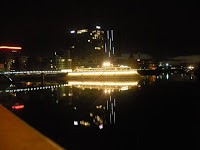 After dinner, we all took a nice long stroll down the harbor to the area where the race had consumed the city streets earlier in the day. Amazingly, all of the booths, trash, and fences were gone and cleaned up. It probably took a large army to have all of this done while I was resting throughout the day. Quite impressive to know that all of this was taking place.

The stroll was very relaxing and we simply took our time. We eventually arrived at the Capella Bar and Cigar Lounge, which was very high class place. Think of what you would picture a relaxed up-scale cigar lounge would look like, and then add me. That is exactly what it was. The lounging area had a huge 10 by 20 humidor that was lined with top-dollar cigars. 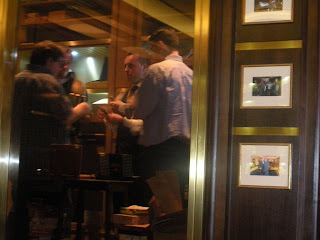 Bob, Me, and Bill Picking out our Cigars 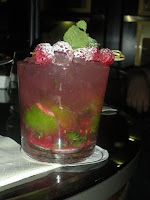 Bob, Bill, and I all entered the humidor and picked out 3 large Habana Cuban Cigars. I had no idea what to order, so I let them choose. Mostly, I know of Swisher Sweets, which are about $5 for 5 cigars. These cigars were a little bit more than that... each. Michelle and Peggy basically "tolerated" our adventure and ordered some Mojito's.

We all sat in the lounge chairs and relaxed with our drinks and cigars enjoying conversation with one another. I really enjoyed this place, but by the time I left, my eyes were very heavy and a bit burnt / dry.

Around 1 am, I made it back to the hotel and crashed on my bed. This was one long day. However, I'm still on cloud-nine with my PR this morning and I promise to write my race report soon to share the German marathon experience... 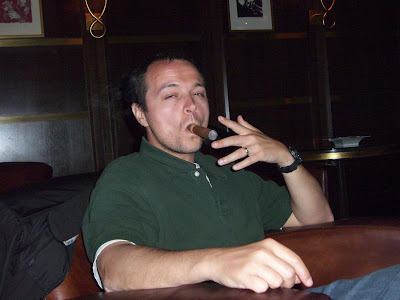