Today was another great day. Excuse the length of the post! I took a lot of pictures today, so just ignore the size of your scrollbar on the right... :)

Anyway, it started off rather slow actually. I slept in until about 11am after a solid nights sleep. My room was very quiet and very dark all night and all morning. I was actually quite surprised to learn that it was already 11am when I woke up. I've not had this much solitude in a long time, even at home. 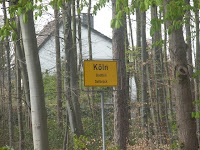 Immediately, I put on my running clothes and headed out the door to see if I still remembered how to run. I haven't ran since the slow 4 miler with Volli a week ago. Needless-to-say, it felt great to get my legs moving again. Around mile 2 I realized I was lost and decided to turn around and retrace my steps. I actually ran outside the boundaries of Koln at some point... 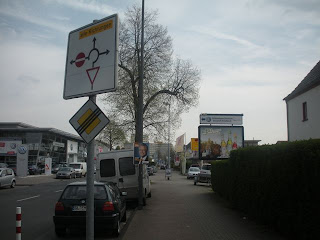 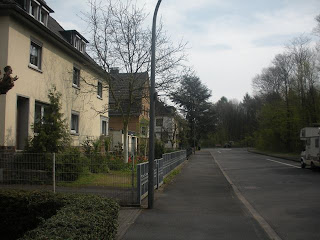 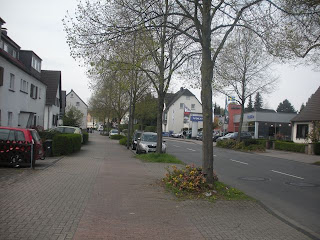 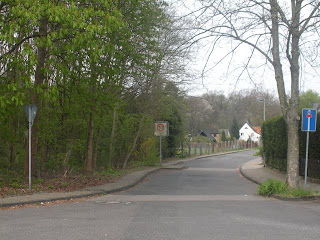 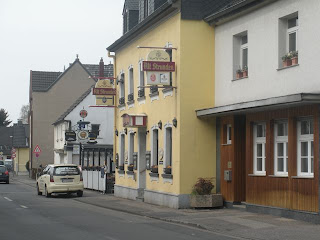 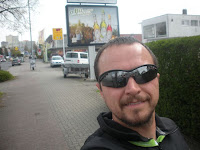 These are the best runs most times; the ones where you just go out and discover a new place. I do it everywhere I travel to and it's one of the highlights of travelling for me believe it or not... I plan to do this again tomorrow and the next to try and run through some trails around here. There are actually quite a few nature trails in this area and I can't wait to see some of the German beauty off the beaten path. 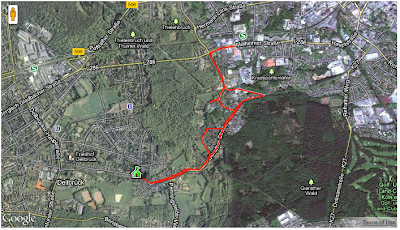 When I returned, I took a quick shower and then joined Rita, Uda, and Nouchine for lunch. We had rice with meat and juice to drink. Afterwards we all sat around and enjoyed ice cream bars for dessert. By this time, it was a little after 1:30 and everybody in the house was going to lay down for a nap since they've all had a long day already. Since I'd slept the day away, I decided to take my train ticket and head into downtown Cologne by myself. I think Rita was a bit surprised, but I felt confident I could navigate the rail system by myself. Also, Dariush had found an extra cell phone (with some free minutes on it) that I was going to keep in my pocket in case I get really lost or something. 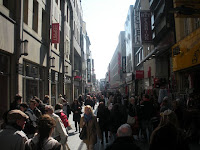 I left a little before 2:00 pm and was in downtown Cologne in about 20 - 30 minutes. I did a LOT of walking today. I actually got off the train a few exits early just so I could see some new sites and walk the streets of Cologne. Once I got near the Cathedral area, I saw that the city was alive and crawling with tourists and shoppers. I tried to blend in with my big peace sign tie dye t-shirt. Though, I'm sure I could be spotted from miles around. This shirt rocks! :) 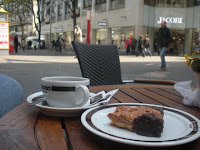 The weather was beautiful, so all the shops had their front doors open for business and the sidewalk cafe's had their tables mostly filled. I stopped for a pastry and a coffee at a nice little cafe and sat out on the sidewalk for a while myself. After that, I hit a few souvenir shops and mostly just walked around soaking in the day. I had no schedule and nowhere to be, so I just turn down a street and followed it for a while to see where it would take me, then I'd turn down another street and see where it would take me, etc... Every now and then I'd pop into a souvenir shop and look around, but mostly just walked around outside and took lots of pictures of the area: 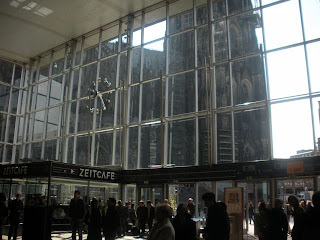 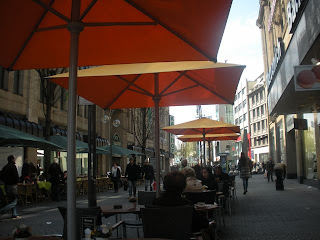 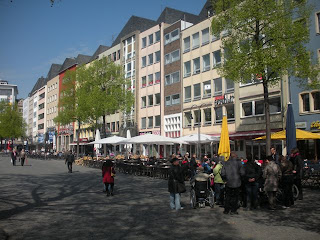 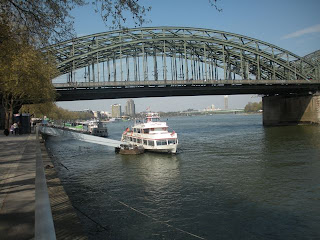 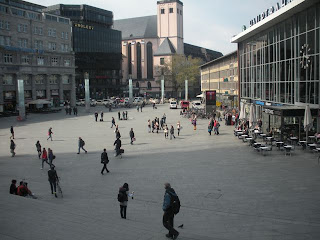 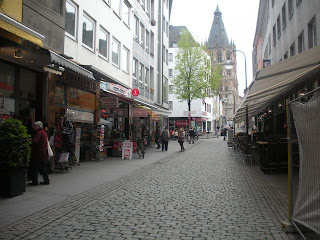 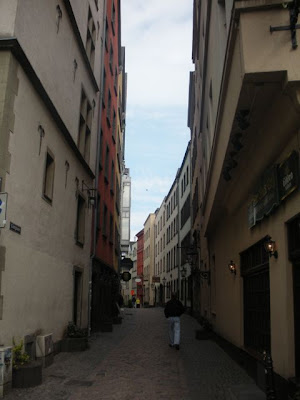 Around 4:30, Dariush had made it home from work and called to invite me back to the house for dinner with the family. I made my way back to the train station and took the "18 train" back to Theilenbruch (their village). The entire trip takes about 20 minutes once the train leaves the Kolner Dom train station. I just looked out the window at all the scenery the entire time. We went through big stations, under the streets, through tunnels, over the Rein River, and through lots of little villages all the way back. It was neat to see so much of Germany without any effort. I literally had my leg propped up on the seat in front of me with my chin in my hand while looking out the window the entire time. Others would get on at one stop and get off at the next stop, but I was there until the train stopped at it's final destination.

When I got back to their village, they all met me and we walked back to their house together. We actually walked through a small park and it was very peaceful. Nouchine was a ninja on her little bike. She's only 4 years old and rides her bike like pro. Jonathan was very quiet the entire time in his stroller; much like me on the train. :) We all talked about the day and I told them about everything I'd seen in Cologne. Dariush plans to take me to the top of the Cathedral sometime this week, and I'm very excited about that! 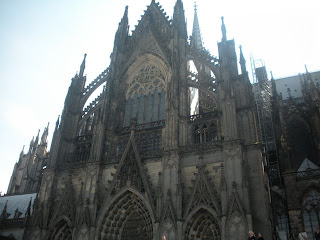 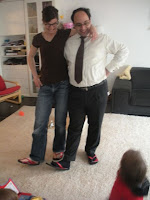 Before dinner started, I gave them all some gifts from the states, and it was so cute! Jonathan and Nouchine really opened up to me once I started handing out gifts. :D I sat and played with them in the living room while Dariush and Rita prepared dinner. It was so much fun to just hang out with two toddlers where none of us understood the other. Really, I loved it so much and was bummed when we had to actually get up for dinner. I think that Jonathan gave me every toy he owned, and Nouchine talked to me like I understood German like everybody else. :) From time to time I'd just say "Yaa, good" or "Ahh, Danka" with a smile. :) They were so cute!!

For dinner we had the Ghobad special of rice and meat again. It's actually quite delicious, and I was looking forward to it this time! This time with bread, salad, cheese and other meats. The grown ups had red wine as well. By this time Nouchine was very comfortable with me and actually wanted to sit by me. I felt honored! I sat between my two new friends: Jonathan on my left and Nouchine on my right. Dinner was delicious of course, and then it was time for my two new friends to get ready for bed. I read a few English books to them while Dariush and Rita cleaned up, and really enjoyed it. Jonathan jabbers a lot and gives me lots of toys to let me know that I'm "ok" in his book. :) 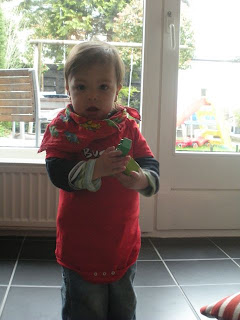 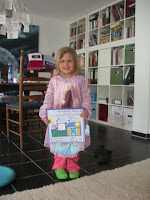 At one point, Nouchine and I were having a "conversation". This means that she would rattle off a bunch of German and laugh, at which point I would then laugh too. Somewhere in the middle of these stories, Dariush came in the room and I asked him what she was saying while she was in mid-sentence of story # 7... He politely interrupted her and asked that she tell him instead, and that he could translate it into English for me me. She looked at him and said (in German) "No, it's ok Daddy, I spoke very loud and clear!". :) Too funny!! 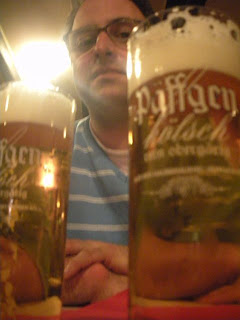 After the kids laid down for bed, Dariush and I headed to a local pub for some beers. This pub is about 3 or 4 buildings down from Dariush's house and was bustling with locals enjoying beer and football on the television. Dariush FORCED ;) me to try a special German dish called Curry Waurst, and let me tell you... Wow! Not to say that it beat Rita's Rice and Meat, but it was pretty darn good! The sauce should have come with a straw, but for health purposes, I'm glad they forgot it. 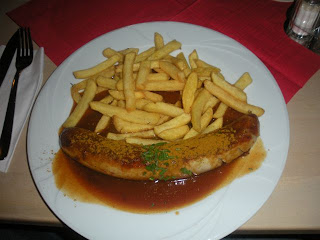 Once we were done there, we came back to the house and I was able to chat with Jennifer for a while, and then I wrote this post. Tomorrow, I get to do a few fun things and I'm anxious to post the pictures at the end of the day.

Stay tuned... Oh yeah, thanks for reading and commenting (on Facebook and in my comments). I mostly put this up here for my own journal to look back on and to let my family know what I'm experiencing in real time. Hope you enjoy reading them as much as I enjoy writing them!
author: Luc @ 5:48 PM