Today was a great day consisting of work, a race expo, more work, a quick run, dinner by the river, and drinks on the town with Bob and Michelle. 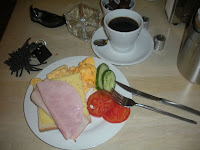 I woke up around 7:00 am and got a full breakfast in me before heading down to "the office" (ie. Bob's flat). We worked at the table all morning and kept a full supply of coffee nearby. Bob and I worked at his kitchen table and there was this very awkward looking squirrel hanging out on his back patio which is 3 stories up. The patio has a large tree that hangs it's limbs over it, which allows lots of wildlife full access to his patio and porch area. The squirrel was very interesting as it had these pointy ears which made it look like a linx. I snuck out side very quietly and tried to snap some pics. Some of them turned out ok, but most of them were not so good since he moved much faster than my camera could keep up with. 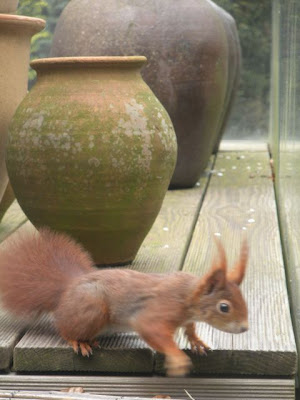 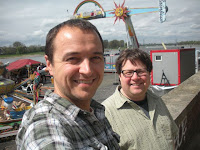 Around lunch time, Bob and I walked to a local restaurant and got some lunch consisting of sausage, french fries, and beer. After lunch we headed toward the river and went looking for the Dusseldorf Marathon Expo so that I could pick up my race packet for race day. There were lots of people there picking up there packets and of course there were many tables set up like any other race expo. The biggest difference was that everybody was speaking German and handing out German flyers. I got a few flyers in my race pack, but can't understand what any of them actually say. :)

Once we got the race packet, we headed back to the flat to continue working. We worked until about 5:30 and then I headed down to my flat to drop my things off and take a quick run to get my legs moving. I've been pretty stationary for the last few days (more-so than usual) and really wanted to get lots in Dusseldorf for a an hour or so. Mission accomplished! 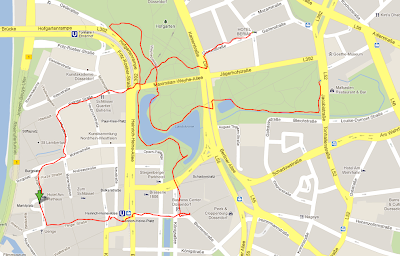 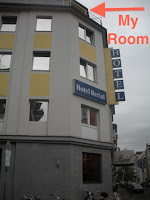 Eventually, I stopped and asked a nice woman where I was and she was shocked at how far away I was trying to get. She was either from the UK or was German with a UK english accent. She was very nice and pointed me in the right direction. I made it back to familiar surroundings and made my way back to the hotel.

Upon arrival, I took a quick shower and headed down to Bob and Michelle's flat. We were going to take a drive around the marathon course and then eat some dinner once we finished. As it turns out, I met them outside their falt as they were beginning a walk with their dog, Gizmo (ie. Gizzy). I told them that I would join them and we began our stroll through the park. 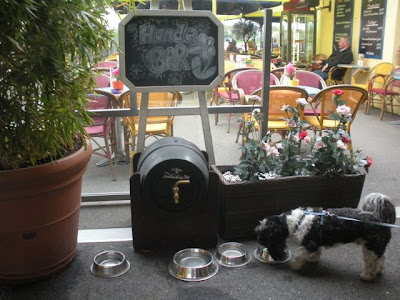 Eventually, we made our way down to the river where there were lots of restaurants right on the street. Literally, the kitchens were built into a wall that was underneath the street above. The "dining area" was on the street and there were large tents lined up where everybody ate outside. This made for an amazing atmosphere. We sat right near the water and got to see some pretty impressive boats go up and down the Rhein River. 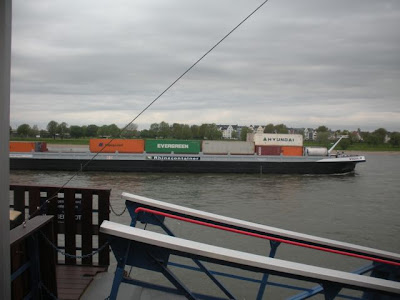 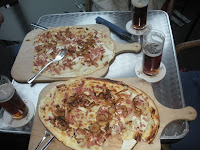 I ordered WAY too much food and was only able to eat about half of it. I was under the assumption that one of the dishes would be nothing more than an appetizer; it turned out to be a table size dish. The other dish I ordered turned out to be a stack of fried potatoes with two strips of raw fish laying over top. It might be a very desirable dish to some people, but I had a hard time swallowing it. Unfortunately, I only ate about 1/4 of the plate due to the size of my "appetizer".

After dinner, we decided to walk around and get some drinks in the Altstadt area. They took me to a very cool street that was nothing but bars. Bob informed me that it is considered to be the "longest bar in the world". I could see why! We looked one way and it was crowded with people, we looked the other way and it too was crowded with people. It resembled something that you would see at the french quarters in New Orleans during Mardi Gras. We spent about 2 hours here and just drank beer after beer and had great conversations. 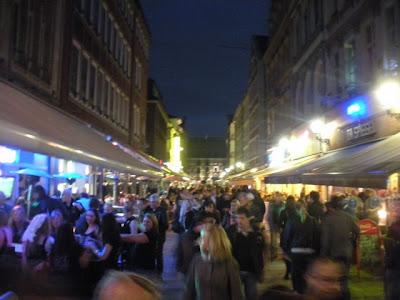 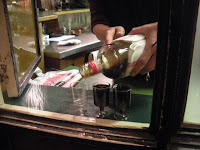 They took me to a cool bar where you could order a shot of Killepitsch from a walk up window. Basically, you walk up to a window, throw down some euros and you get a large shot of a Dusseldorf liquor that is almost comparable to Jaegermeister. It was good. We visited this window 2 times. :)

After our drinkfest, we took the metro back to the train station near the city center (where Bob and Michelle live) and walked back to our respective hideouts. I literally came home and passed out. Great day!!
author: Luc @ 3:32 PM

I love the "sausage, french fries and beer" quote...This is how I picture every meal you have eaten in Germany ;)