Very busy and exhausting (in the best way) day today. Dariush took the day off of work and was going to show me around downtown Cologne. My alarm went off at 8 am, but I didn't actually wake up until Dariush was knocking on my door at 8:45 am. Nouchine had to be to school in 15 minutes, and the drive alone is 10 minutes. He said "Lucas, take your time, but hurry up." :) Apparently my alarm went off and I turned it off in my sleep. Doh!!

I woke up, brushed my teeth, organized my bed-head situation, and got everything ready for a full day in Cologne in about 5 minutes. By the time I got upstairs, I was able to join in on the Ghobad chaos of getting both kids ready for "kindergarten" before we rushed out the door around 8:55 am. Nouchine and Jonathan were both late for kindergarten, but (according to Dariush), this is very normal. :) 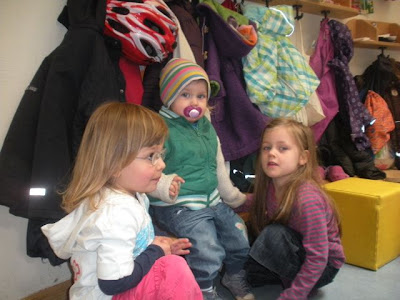 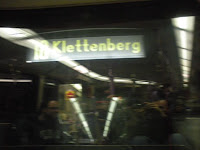 After dropping off Nouchine at school, Dariush and I drove back to the train station and parked the car for the day. Our mission was to spend a full day in Cologne just looking around and being 100% bonafide tourists. We arrived at the train station and got a front row seat on the first car headed to Kohlner Dom.

Upon arriving, I mentioned to Dariush that I simply love cold / rainy weather when I visit foreign cities. When I was an exchange student with NHS, we always travelled to France in February. Therefore, it was typically windy, rainy, and cold everywhere we went. The same was true for my last visit to Europe as well. Also, I think it's safe to say that "cold / windy" is an adequate description for my time in Siberia as well. After all these experiences what some might call gross weather, I've learned to associate it with tourism. I honestly love wet and windy weather when visiting foreign places. Lucky for me, today was pretty much gross! :) 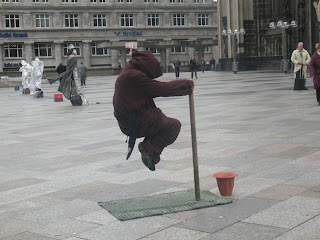 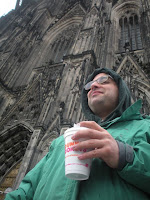 When we got out of the train station, the temps were in the low-mid 50's (fahrenheit) with a strong blustery winds. The streets were scatted with puddles and the sky was overcast. All the tourists were bundled for the cold weather and snapping pictures of each other. It literally put me in a great mood, and I was ready to discover all the amazing sites of Cologne, Germany.

Our first stop was an authentic German Dunkin Donuts. :) From there we hit a few souvenir shops and walked around the area a little bit before we actually entered the Koln Dom (ie. Cologne Dome). 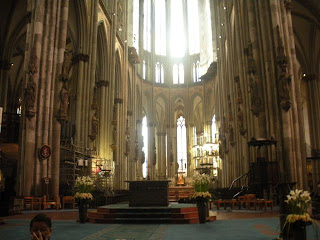 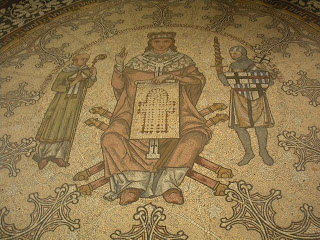 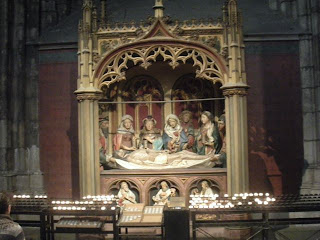 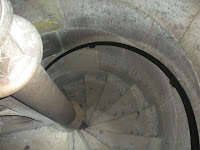 We spent a few minutes looking around the first couple floors of the Kohl Dom and then began our journey to the top of the cathedral. Luckily the calories from the donuts were more than burnt by about the 1/2 way point of our ascent. Our legs were burning and our hearts were pounding once we reached the top. We were both pretty well spent by the time we hit the top of the cathedral, so we hung out and snapped some pics. Dariush pointed out various places throughout the city that were significant to Cologne's great history. We could actually see the Dusseldorf skyline from up here too. 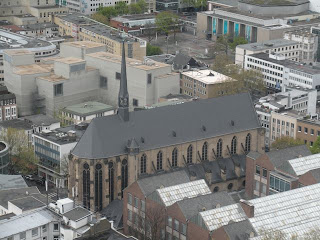 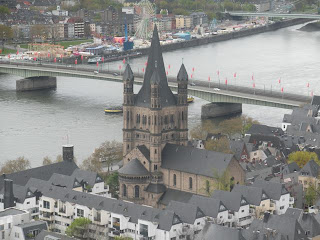 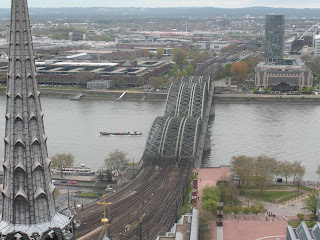 After 20 minutes or so, we descended the steps and enjoyed the huffing and puffing from the walkers making their way up to the top... Been there. Done that. Dariush and I fought the urge to tell them that they were "almost there" as we got closer to the bottom. :) This really was an amazing experience and it let me look at the Kohl Dom with a new set of eyes each time I saw it throughout the rest of the day. 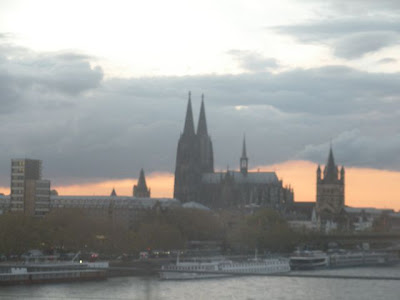 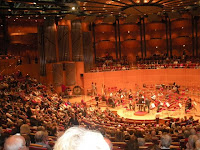 Form the Kohl Dom, Dariush and I hit a few souvenir shops and then decided to watch the Philharmonic Orchestra put on a free public show at a local concert hall. It was exactly what we needed after pounding our quads for the last 2 hours up and down ancient staircases.

The show was simply beautiful. It made me realize that I need to take my girls to one of these shows in the states. They watch so many Disney movies with this "concert symphonic music", but have no ideas which instruments make which sounds, nor how beautiful this music is in real life. This is now on my list of things to show my children. The show was amazing!... The composer explained to the crowd (in German) that the pieces being played were from an old Tchaikovski archive that had been lost and it was the first time it had been played in Germany. Awesome! 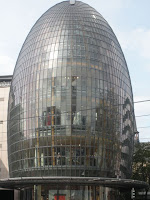 After the show, Dariush and I walked around some more and visited a few more shops and various other sites throughout the city. We stopped for lunch and had some pizza and beer in a small restaurant inside the GlobeTrotter shopping center (very cool store). We then did some shopping and then made our way to the Cologne Microsoft building, the Lindt chocolate museum, and a few other stores which I don't know the names of. All in all, this was a fun-filled day with Dariush. We had a blast and did a lot of laughing today. I was so happy he took the day off to do this with me today. I feel like I got the full tourist experience of "Cologne, Germany" after today. 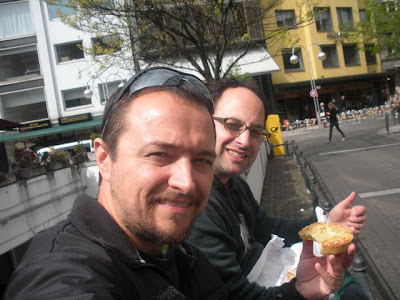 Me and Dariush enjoying pastries on a side-street.

Around 5pm or later, Dariush and I headed back to the house with all of our gifts and got ready for dinner with the family. Before dinner, we all had a quick chat with Jennifer and Daizi. Jennifer finally got to meet Jonathan, and see exactly how big Nouchine has gotten since her first visit to the states. Daizi and Nouchine showed each other their favorite stuffed animals in the camera (cyooooot).

For dinner we had scrambled eggs with fried vegetables in them. I LOVED it! This is one of my favorite meals at home (eggs of any kind). I also had a nice Reissdorf Kolsch and some bread. After dinner, Dariush, Nouchine, and I all snuck some chocolates while Rita put Jonathan down for bed. :) I got to read a book to Nouchine before she went to bed, and I really enjoyed that. She's opened up to me and was repeating the English words I would say in the story. It was a lot of fun to see her brain working with these new words. 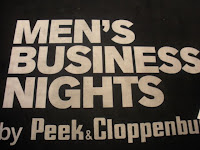 Around 8 pm, Dariush and I headed back out to the train station and attended a very fancy party at the Peek & Cloppenburg store. This was a fashion-show party and you could only get in by invitation only. Dariush was invited through his work and he took me. Needless to say we were a bit out of our element, but who else to be out of our elements with than each other. :) We made the best of it and simply had a blast. We didn't know what to expect, so I think that even made it better knowing that it was something neither of us had any experience with. 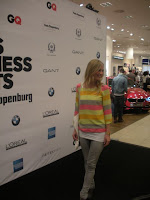 There a lot of very high-class people there who looked like the had a few dollars in their pockets. There were a lot of fashion models there as well. All the drinks were free. All the food was free. There were  games, speakers, and even a live band that kicked butt. It was a LOT of fun. Dariush and I just walked around and "mingled" with each other mostly. Upon leaving, everybody was given a high-dollar goody bag of products and merchandise. This event was off the charts, and they sent us home with some pretty cool stuff. 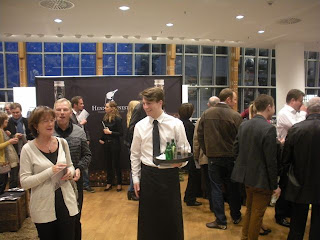 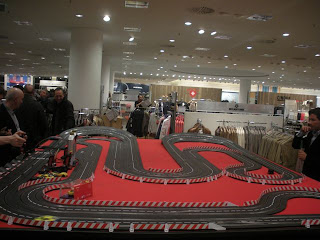 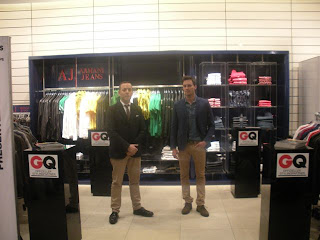 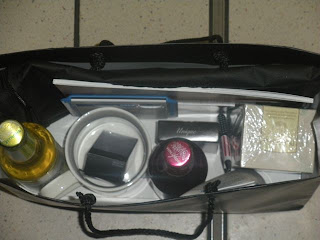 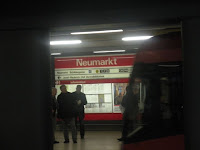 From the party, we tried to make our way to another bar, and ended up in a Greek restaurant where we just relaxed and talked. We each had the Gyro dish with authentic Tzadziki. :) I would have never known what this was had I not been in Greece last week. Anyway, it was a great way to end a fun day in an amazing city with a great friend.

The night ended around 2 am when we returned home to a quiet house. Dariush had to be at work in the morning, and I will be sleeping in a little bit. Thanks for the great day, Dariush!
author: Luc @ 4:24 AM