Wonderful day! I woke @ 9 am (after only 4 hours of sleep) and did some last minute computer stuff before starting the day. I snuck snack out of the fridge that I bought the other day, and "borrowed" a bottle of water from the cabinet. Did some chores in the basement, and then headed upstairs around 12 pm and had lunch with Rita and Jonathan. 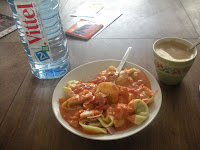 My intention was to simply take a quick shower and then head out for some lunch. I knew Rita had a full day and would probably want to take a nap. The last thing I want to do is get in the way and be a nuisance. She asked me if she could make me a cappuccino or cook me a pizza or something. I insisted that I was just fine, but she insisted that I had to be hungry and that she would figure something out. To my surprise, she made me a full course lunch with a heaping bowl of tortolini with ham and some italian sauce and a piping hot cup of cappuccino. Way too kind. It was delicious, but I could only eat about 3/4 of it.

After my mid-day feast, Rita laid Jonathan down for a nap, and I was going to go out for a walk around the neighborhood. To my surprise, I found my girls were online and I was able to talk to them instead. Awesome trade-off!! We talked about everything and nothing. It was great! They were all getting ready for school and Jennifer was taking turns getting one ready while the other two would talk to me. It was almost as if I was there, but I wasn't. 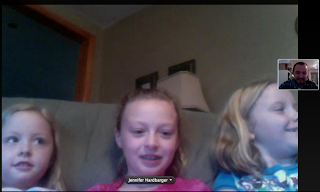 Daizi, Lizzie, and Jazzy getting ready for school 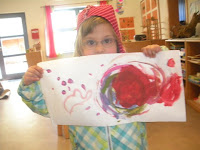 Once the girls had to get off the computer, I headed back upstairs. Rita and I were were going to pick up Nouchine from school and Dariush from work. We got "Johny Boy" packed up and headed to the Kindergarden to retrieve Nouchine first. When we got there, Nouchine was eager to show Rita her fancy art projects that she did. It was so cute to see her show off her art and get so excited about it. She was very proud of them, and rightfully so. On the drive to pick up Dariush, I really got to looking at the painting and it was actually really (I mean, really) good, with some pretty cool details!! They may have an art prodigy on their hands here. :) 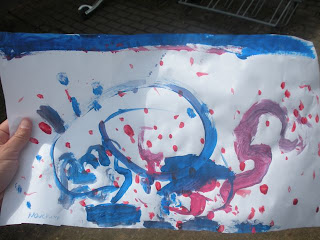 We picked up Dariush at his office around 2:45 or so. It was at this time that I found out that we were all going to take a nice leisurely drive through the countryside of Bergisch Gladbach. This is an area that is exactly north of Theilenbruch and consumes a pretty vast area of countryside. The drive was beautiful and I took a lot of pictures. However, the pictures do it no justice and it was impossible to capture the beauty of the countryside in a digital picture. I just loved seeing all the little german villages scattered throughout the rolling country side. 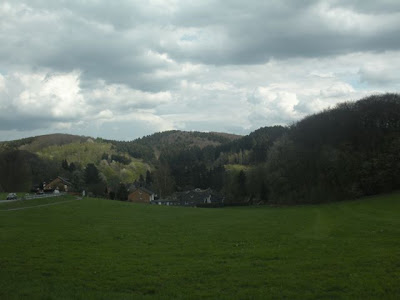 Oh and we actually drove through Heidi Klum's hometown on our way there. She's kind of a "home town hero" around here I guess. Jazzy would be pleased to know this, as a fashionista herself... <3 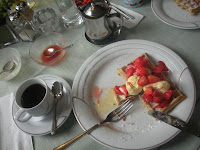 We stopped at a delicious restaurant in a nice residential area in the hills and ordered some delicious waffles. This area is actually known for their waffles and I now know why. They were probably the best waffles I'd ever had. I topped them with chopped up strawberry's and vanilla ice cream, and then chased them down with a nice black coffee. You can take the boy out of the states, but you can't take the states out of the boy. :)

From the restaurant, we spent some relaxing time at a really cool church by the name of Altenburg Cathedral. The church was built in 1259. It was built in order to replace another Romanesque building which had been consecrated in 1145. Pretty neat knowing that this Church has been around for about 800 years. Wow. 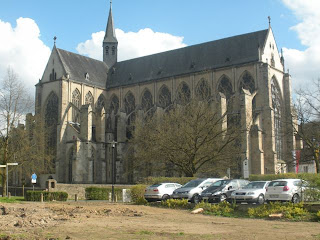 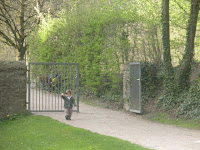 We really relaxed and took our time here. The weather was great and the kids were playing so cute. We literally just soaked up the day and had nowhere else to be. These are the best days in life. No schedule, no tasks, just soaking in the fresh air and listening to the birds chirping... Deedle daddle doodle (ie. this is a Yoe-nah-ton bird). :)

After the church, we headed back home and decided it was a great evening to have another cook out. Dariush fired up the grill and we all feasted on meat and bread. The grown ups also had some red wine. It was a great dinner and I walked away very full.

While Dariush and Rita put the kids to bed, I went downstairs and killed some time checking email and stuff. After about 30 minutes or so, I retrieved Dariush and we headed back out to the Eis Cafe to get some authentic Italian Gilato. :) When we returned, we tried to watch another episode of the Pink Panther, but I was spent and kept dozing off. I ended up going to bed early. I was actually in bed / lights out by 10 pm. What a great day!!
author: Luc @ 6:29 PM

Tom - You absolutely have to come to Europe one day. It will change your whole perspective on everything. Thanks for the comment and let's get a beer together when I get back!