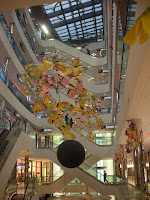 Today was a great day. I did my daily routine of waking up, working out, eating like a king, and getting to work on time at 9 am sharp. Bob and I worked at the table until around noon, and then we decided it was time for lunch. Michael joined us as we headed toward the train station to take the metro down to the "Sevens", which is a multi-level multi-media mega center. Think "Best Buy" on steroids. The ground floor was scattered with various restaurants, and the other 6 floors were nothing but electronics and computer equipment. This is how I picture heaven.

We ate a great lunch at a fancy restaurant on the ground floor. I had the "Doner" which consisted of a small salad on one plate and another larger plate full of french fries and chicken schnitzel (shaved meat). After we ate, we headed up to the top floor where the computers were located and we looked around at all all latest and greatest nerd toys. Needless to say, we had to drag ourselves out of this place in order to get back to work. 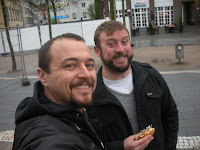 Bob and I worked together until about 6 pm, when I was scheduled to meet up with Nick Mockus at the Altstadt for beer. I knew Nick back in high school where we were both in the French Exchange program. He and I got to travel to France with the exchange program in 1996 and I got to know him a little bit back then. We were merely acquaintances at that time who basically knew each other through the French program. He played football for Newark High School and I was a drummer in the marching band (BDDLITS baby).

Fast forward 16 years, to last year, and he saw on Facebook where I was travelling to Dusseldorf for work. He pinged me and informed me that he was living in Dusseldorf and suggested that we hook up for some beers. Needless to say, we got together last year and hung out a bit. When I learned that I was coming back this year, I reached out to him and let him know I was coming back to his home town, and that we should do it again... 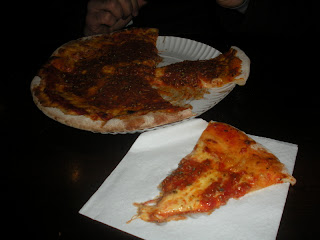 Nick and I started at the Altstadt around 6:30 pm and had a few beers at the Fucschen before making our way towards the Rhine for more beers and pizza. He took me to various local places that he knew of and introduced me to a few of his friends along the way. It's amazing hearing him talk German so effortlessly with his friends. I guess this happens when you live in a country for so many years, but it was still neat to see. We had to stop for some shots of Kilipitch at my favorite "walk up window" where you hand over some Euros and are given a shot of hard liquor through a small window. :) At one point, we even made our way back to the Sevens near the fashion district. Jazzy would love this place, it's "All fashion, all the time". Nick and I had a great time hanging out, despite the rain and overcast weather.

Around 9 pm, we went our separate ways. Nick headed off to a "work thing" and I headed back to the hotel to relax for the evening. I hadn't had much sleep the entire week, so I literally laid on my bed and read until my eyes got heavy enough to close for the night. I felt old knowing that the night was still young on a Friday in downtown Dusseldorf, and here I was in bed by 9:30 pm.

Today was a great day!