Today began much like yesterday, I woke up early, did a mini worked out, showered, had an amazing breakfast, and headed down to Bob's flat to start the work day. Not a whole lot to talk about during the work day... We basically sat around and geeked out all day; Bob on his laptop, me on mine. 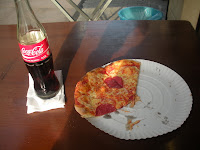 Around 5 pm, I packed up my things and headed down to my flat. Today, I really wanted to have some solitary "Luc Time" so I decided to walk around the Altstadt. I put my bags down, grabbed my wallet and camera and headed down to the Altstadt for a pizza and a beer. It was a lot of fun to just walk around and hear all the sounds of Europe (ie. scooters, cars, people, etc..).

The city has changed quite a bit since last year. They are putting a lot of money into the various projects around the city. I learned that the big project which is right in the middle of the Altstadt is going to be a huge shopping center when they are done. As cool as this sounds, it's almost heart breaking because it is really going to take away from the "old" feel that this area exudes with it's cobble stone streets and old restaurant fronts. 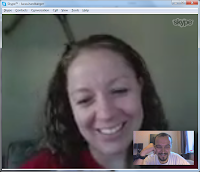 After my little mini tour of the Altstadt by the Rhine River, I came back to my hotel and worked the rest of the night. A few times I was able to talk with Jennifer and the girls. Mostly Jennifer, since the girls were outside playing in the nice Ohio weather. From time to time, they would pop in and say hi to me, but for the most part it was Jennifer and I just talking.

In between minor stints of talking with Jennifer, I really stayed focus on researching this new technology; I was finally beginning to wrap my head around it. One of my weaknesses when it comes to learning new things (maybe it's a strength??) is that I typically engulf myself into something too much until I fully figure it out. I can't just know parts of it, I really need to figure it all out from front to back as quickly as possible. This means sleepless nights, constant brain spinning, stupid questions, etc... up front. Therefore, I stayed up until 3 am learning and researching and piecing it all together with trial and error. Eventually, I told myself that I might figure it out in my sleep, and that was the only reason I went to sleep. :)