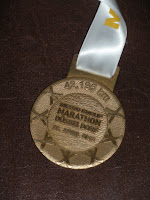 OK, it's time to spill the beans... I was not trained for this race by any stretch. I know I've probably said thsi before, but this time I meant it. I was genuinely nervous about how this run would go; I didn't know if I would pull a muscle at mile 10, damage my feet from pounding the concrete with my minimalist shoes, or blow a knee from all the cool new weight I have gained over the last few months. See my Facebook page for details of when (and why) my training came to a screeching halt on Feb. 2nd. :) Regardless, I was quite pleased with the end result. I finished in 4 hours and 46 minutes.

I woke up at 7:30 am and awoke to my obnoxious iPad "alarm" alarm. I taped my nips, charged my iPod, laced my shoes, and headed down to the dining area for a hearty breakfast. The breakfast hall was packed full of Germans in spandex and sweat-wicking clothes. Carbo craving runners filled the dining area and German speaking excitement filled the room between the clanking of dishes and silver wear sounds. Everybody was preparing for a day of running. All of the eggs had been consumed by the time I arrived, so I defaulted to rations of bread and cucumbers. Blah. I was able to grab an apple on my way out, but that was it... 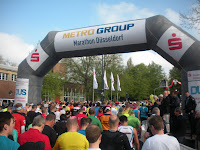 Around 8:30 am, I met Michelle and Bob near their flat and we all walked down to the starting line. The sun was warm but the shade was freezing; it was one of those mornings. I wore my Columbia jacket all the way up to sound of the starting gun. The race started at 9 am sharp.

The first 5 miles were effortless. I ran steady and strong. After a while I came upon a crowd of runners who were gathered near a woman wearing balloons strapped to her waist. The balloons read "4:00"... This meant that I had been keeping an 4 hour marathon pace up to this point. I though "Hell, this is easy". I figured as long as I could keep this balloon lady in my sights for the next 3.5 hours, I'd have a new PR under my belt. A few meters back ran a dude holding a flag which read "3:59:59". Apparently, they didn't coordinate with one another before the race. Shouldn't he be in front of her?

The next 5 miles were just as easy. I was keeping up with the 4 hour balloon lady, and the 3:59:59 flag dude was hot on my trail. He and I played hop scotch for the next few miles, but we never passed the 4:00 balloon lady. Go figure. Regardless, I was still feeling strong and my breath was in tact. I wasn't exerting myself too much (which was surprising). Who said marathons were hard...?

Around mile 6, I found Bob and Michelle off to the side and they were cheering me on to keep running strong. This helped immensely. I had been in the zone for so long with my only friend (my iPod nano) that I hadn't really realized there were other people here. I was "in the zone". My music helped me to stay focused on my form and my breathing; everything else was German.

As I approached the 10 mile marker, I was still keeping up with the balloon lady, and the flag dude was creeping up on me. Eventually he passed me around mile 11 or 12. I still felt strong, but my calves were starting to tighten up a bit. They weren't screaming expletives yet, so I continued to push forward with diligence.

Approaching the "half marathon" checkpoint, I realized I was rocking a 4 hour marathon pace. I crossed the 1/2 marathon checkpoint at 2 hours exactly! At this point, I thought I might be able to keep this up and set a new record for myself. My goal was to keep the balloon lady in my sights at all time, and then as we approached the finish, I'd scream past her and finish with the flag dude (assuming he'd eventually pass her).

As it turns out, my calves and my will had taken a beating from this crazy-for-a-chubby-dude pace and I found myself slowing down with each passing "K". Keep in mind that this was a European race and all of the checkpoints were in kilometers. By the time I'd reached the 25K mark, I'd lost sight of the balloons and my will to pass her...

I thought to myself, I still might beat the flag dude... Needless to say, he passed me shortly thereafter and I never saw them again. I was approaching the 30K mark now and my pace had slipped even further. I was hitting the wall. 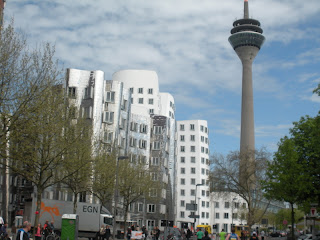 By the time I reached the 20 mile marker I found myself doing a walk / jog regiment. I'd walk for 50 meters and then jog for 200-300 meters. Running was a thing of the past at this point. My quads and calves just weren't in it anymore. Around mile 22 I started looking around each corner for the finish line. It was nowhere to be found. The 4:15 balloon dude passed me, then the 4:30 balloon dude...

The ailments of this distance run tacked on more and more pain to my calves; I continued  looking for that finish line for the next 5-6 miles. Kilometers just didn't make sense to me anymore. My legs were pissed.

Eventually I came to a point in the race where the finish line was in sight, but there was still another 2 miles to go before I could cross it. Talk about gluttony. The race directors did this on purpose! I just knew it! I wanted their names and their addresses. They were clearly distance runners who found joy in this "false hope" game. I see the humor now, but didn't see it then.

Around mile 24 I was able to see the 4:15 balloon dude pass me, but he was passing me on the other side of the road; heading for the finish. I looked at my watch and realized that I was still on a sub 5 hour pace, but my dreams of crushing my PR were just that; a dream. My goal now was to "not die" and just finish. I continued with my jog / walk regiment, but by this point, it was almost easier to jog. Walking took more effort. Ironically, it's more difficult to walk on sore legs than it is to jog. Ask any runner and I'm sure they'd tell you the same. Once you get to a certain point, the mechanics of running are less painful than the mechanics of walking. Weird, I know.
I eventually made it to "the other side of the road" where I saw the 4:15 balloon dude 30 minute ago. I was on the home stretch. I only had about 1/2 a kilometer to go... That's about 1/3 a mile for all my American friends. Oddly, this tends to be the longest part of a marathon. The last 0.25 miles of a marathon are sometimes the most difficult. Your brain says your "almost there", but your eyes say "holy crap, that's far as hell".

I crossed the finish line and the clock read 4:46 with some odd change. The wall is a bitch. If my legs could have just kept up with my ego, I may have qualified for Boston! Maybe next year... (?) 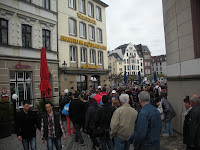 After the race I hobbled around the Altstadt looking for Bob and Michelle. I never saw Michelle on the "other side of the road" as I approached the finish, so I wasn't sure if she had already finished or not. The crowd was pretty compact, so my eyes were scanning every German face to see if they resembled an Andreini. Bob, or Michael, or Matt should be somewhere in this crowd waiting for Michelle to exit the runners area.

Eventually I found Michael and then I saw Bob. Luckily Bob had my coat and that was a good thing. The shade was still cold and I was drenched with man-sweat. I immediately put my coat on and we all enjoyed a tall beer with Michelle's relay team near the finish line.

We had dinner plans for 6 pm, so I arrived at Bob and Michelle's around 5:45 and we headed to a very nice restaurant named Meyer & Freeman (ie. Morgan Freeman) to eat dinner with Barry, his wife Becky (?), and their daughter Erin. I had the shnitzel, and it was THE SHNITZEL! :) I ate it all.


After dinner, Bob and Michelle dropped me off at my front door. I hobbled up the steps and fell on my bed again... I definitely saw the sand man this time.

This was a great experience. I'm proud of the way I ran the race. I pushed hard in the beginning and pushed even harder near the end when all of my energy was gone; I left everything on the course. Once the 4:30 balloon dude passed me, I knew it was time to just enjoy the run since all hopes of a new PR were gone. I will remember this run forever. It's the run that I didn't (ok, couldn't) train for, but still kicked ass on. :)

Thank you, Bob, for allowing me to run this race again! Maybe I'll set a new PR here next year??? :)