Today was a fairly long work day which ended with an amazing conversation with a new friend. 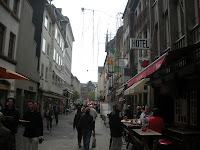 I arrived at Bob's around 9 am and we worked until noon. At that time, he had a lunch meeting with someone, so I came back to my hotel room to work for a few hours. For lunch, I didn't know what else to do, so I walked down to (where else, but) the Altstadt for a pizza and pop.

On my way back to the hotel, I stopped and bought a 1.5 liter of water and worked at my desk for 2 more hours before heading back to the Bob's flat to work with him at the table. He and I worked diligently til about 7 pm, when it was time for dinner.

I screwed up today and embarrassed myself at the dinner table beyond belief. Michelle announced that it was time to eat, and at our house that means "Drop what you're doing. Come-and-get-it!". Doh! Everybody seemed slow to the table, so I hobbled up to the bar (still sore from the run) and was the first to arrive. I don't think I rushed to fill my plate, but once I filled it up, I began tasting the food that she had prepared and telling her how good it was... Shortly thereafter, Matt came to the table with his plate full of food, but didn't begin eating yet... I quickly realized that I had jumped the gun! Eventually Bob came and prepared his plate, then Michelle prepared hers. Once everybody had their plates ready we said "Grace" and then everybody began eating.

Wow, I wanted to crawl in a hole and die. I was extremely embarrassed and was pretty quiet the rest of the meal... I still am embarrassed by it, but learned my lesson good and well tonight. :( My parents raised me better than this...

After dinner, Bob and I went back to the work for another hour or so, and then I headed back down to the hotel room to catch up on somethings that I've been putting off. I had to catch up on my blog, email some people that had been waiting on me and tie a few more loose ends. At one point, I went down to the bar to but a bottle of water at the bar. There I met a very nice man by the name of Herbert who was in charge of the hotel.

Herbert is 75 years young and was an absolute joy to talk to and get to know! Our introduction started by him asking me what country I was from. He then told me to pick a drink and sit and talk with him for a while. I told him I'd take a scotch on the rocks, so he poured it for me and we sat. He and I sat at the bar and talked for over 2 hours!! We could have easily talked for 2 more hours, but he was starting to drink me under the table. After my first glass, we were so deep in great conversation, that I bought myself a second glass of scotch and we continued with our conversation. As I finished that glass, we found ourselves even deeper into our conversation that he interrupted it by offering me yet another glass of scotch "on the house".

Needless-to-say, Herbert and I became pretty good friends in a very short period of time. As people would come in the front door, he'd pause our conversation, tend to their needs, and then come right back to the bar and pick up right where we left off. I can't explain how much I enjoyed this night with my new friend!

We talked about politics, women, sports, history, family, religion, you name it... I will never forget my 2 short hours with Herbert at the Hotel Berial! He (personally) made my stay here at this hotel so very memorable. Thanks for a great night Herbert! I look forward to seeing you next year at the bar around 11 pm! :)
author: Luc @ 9:26 PM