Once we got everything organized and worked out, he took off and I immediately got ready to head into the village of Val D'Europe so that I could get some groceries and do a few errands. My ultimate goal was to get groceries and come back here to work all day. I had a HUGE project that needed my complete (undivided) attention all day. Therefore, it was very important to have enough food and water so that I didn't have to leave the apartment for anything.

I headed to the village around 10:30 - 11 am and was able to get all the things I needed. It was a total "batchelor" grocery list too. I got:
The supermaket was quite an experience. I did fine until it was time to check out. It was pretty busy so I waited in line for almost 20 minutes. When it was my turn, the lady held up my fruit and rattled off some intense French words.

I gave her the "HUH?" look and said "Désolé mademoiselle, je suis American."

She smiled and indicated that her english was very bad. So instead of giving it a lot of effort she simply picked up my fruit and said "weight?".

I said "Je ne c'est pas" and shrugged my shoulders.

She then pointed across the supermarket and rattled off some more French. That led me to believe that there must have been some scales over there, and I needed to weigh them before I could check out.

So I grabbed the fruit and took off running towards the direction she was pointing. When I got there, there was a touch screen computer with scales attached to them. Granted, all of the prompts were (of course) in French, so I had to take my time and figure out each step.

Eventually, I was able to work my way through it and the banana's and apples each got their own printed sticker with the weight on it which told the lady how much they cost. I then sprinted back to the checkout line where there was a line of customers waiting for me and watched me fumble all the way back up to the cashier who (the whole time) had a very pretty smile on her face. I looked at all the customers as I scooted by and said "Désolé, désolé, désolé" and gave her the bags so that I could get the heck out of here and let the supermarket get back to it's cycle.

I totally felt like that commercial where the whole place bogs down when someone pulls out their cash. :) Only, the theme music was a french accordion and I was the dude with the cash...

Anyway, the walk back to my apartment was pretty intense. My grocery bag was super heavy and I had to walk (just about) 2 miles with it. I would go about 100 yards and then have to switch hands. In hind sight, maybe I should have just taken the bus for 1.5 euros (~$2). Oh well, it was an experience to say the least and it allowed me to suck in some fresh French air.

When I got back (around 1:30 pm), my day started and I was officially in geek mode. Actually here it is 2:30 am and I am still grinding on the tail end of it. I'm not saying this to complain or make you (Mom & Dad) think I'm being worked to death. :) The truth is that starting tomorrow, I won't be able to work on this project again until next Monday. Therefore, it is essential that I put 120% of my focus on this before my fun-time starts (at 12 noon tomorrow). If my part isn't done before then, the people around me cannot be productive while I'm out. Therefore, I'm going to work on it for a few more hours before getting some sleep...

Ok, enough about work... I was able to talk to Jennifer and the girls on Skype for a while and that really brightened up my day. Even though it too was a short talk, it got me out of a code-funk and back to reality. Jennifer told me about what Kanye West did to Taylor Swift at the VMA's last night... What a dork!! She also told me that Patrick Swayze died today. :(

Well, I'm gonna sign off... Sorry there are no pictures today. Again, I've been couped up doing computer work all day, so there really isn't much to show in the way of pictures. Here's a picture of where the supermarket was from the front gate of my community: 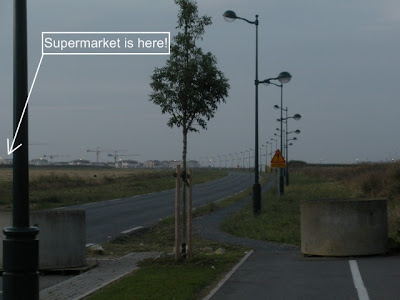 Looking at it from this picture makes me realize that I had to be crazy to think this was a good idea. :)
author: Luc @ 7:13 PM

Luc
This travelogue is immensely entertaining! It sounds like you are getting a full-on taste of French life. Enjoy yourself, keep writing, and come home safely!

Thanks Mark! I'm having a blast over here. It's hit the Facebook world by storm I think. Though, I much prefer the comments on my actual blog so that they stick over the years when I'm old and want to reflect...

See you soon my friend! Let's do that overdue Mo run when I get back too. ;)