Today was a great day, mais pas très français. It started off by me getting to sleep-in a little bit. I went to bed around 2:30am this morning, and then after some tossing and turning I probably didn't "fall asleep" til around 3:30 or 4am. I wanted to wake up around 7am, but actually rolled out of bed around 9am instead. C'est la vie... 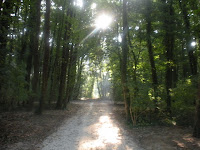 I wanted to get in a nice relaxing run before starting the day, but that didn't happen. Sundays are typically my "long run" days and I try to run anywhere from 10 miles or more at a very slow & relaxing pace. Now granted, I didn't want to run 10 miles this morning, but I would have been very happy with a 4 miler or a 5 miler. Since I woke up so late, I was forced to do a very quick 1 mile run. Oh well... The good news is that on my sprint, I was able to find a nice little gravel trail off the road that tucked into some woods. I ran through this little wooded area for about 1/4 mile then had to turn around and head back to the apartment and get showered since Patrick was on his way to meet up with us. Oh well, I worked up a good sweat since I was trucking kinda fast. 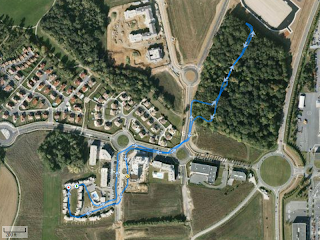 After my run, I took a quick shower and then it was off to the Montevrain train station where we needed to pick up Patrick. He was coming in from Paris and then we were driving back out to Fontenay-Trésigny, where the office is located. While at the train station, we purchased some cold cut sandwiches, yogurt, water, and some chocolates to keep us nourished throughout the day. The goal was to have enough food and water so that we didn't have to leave the office for anything and therefore just focus on work. We did just that... We spent the full day working side by side on this epic project; which is really the whole reason that I'm over here in the first place. It worked out great that we were together today because we really got a lot accomplished in a short amount of time.

Fast forward 6 hours while we work. Nothing really worth blogging about, unless you enjoy dba / programmer / system architecture talk. :) I'll assume you don't so let's move on... We left the office around 6:30 - 7pm and headed back to Montevrain, where we ate at a nice little Italian pizza place. Of course (to me) it was French-Italian, but the theme was supposed to be Italian. It's hard to pull off an Italian theme in France for an American customer. Especially when serving French wine and French bread from a French menu. :) En fait, c'est TRES BIEN!!

We of course started off with some wine, and bread. I ordered a Pizza all to myself for the entree and wound up eating the whole thing in record time. C'est delicious! After the pizza, we ordered some coffee and then a nice little French apple dessert. The apple dessert was sooo good!! Even on a full tummy, I had no problems eating it. :) 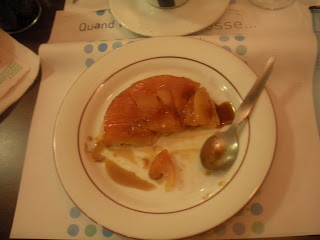 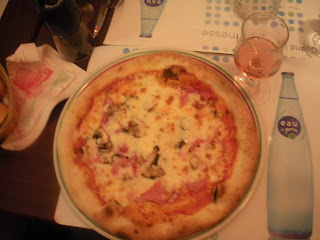 After we left the restaurant, we came back here to the apartment and I called my girls on Skype. 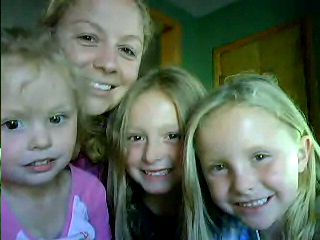 We had a great time and just caught up for about 20-30 minutes with a streaming video feed the whole time. Jennifer remodeled the house a little bit and the girls were playing outside with the puppy. I gave them all a video tour of my apartment and showed them how the toilets flush, as well as took them out on the balcony, and through the french doors leading to the patio. They all really enjoyed it and I felt like a tour guide for a while. Jennifer and I had a moment of silence together and was able to mourn over the Buckeyes losing to the USC Trojans last night. :'( She said it was a great game, but we just lost it on the last drive... Oh well, if you're gonna lose, let it be to one of the best teams I guess.

After talking with the girls, I came back downstairs here and I'm currently downloading Visual Studio 2008 SP1 over a wifi connection. Not only that, but the file I'm downloading is probably sitting on a server in Redmond, Washington, and of course I'm in the middle of rural France. The download is 831+ MB, but I really need it in order to be productive tomorrow. Therefore, I'm just letting it download at it's own pace while I update my blog and check emails. :P 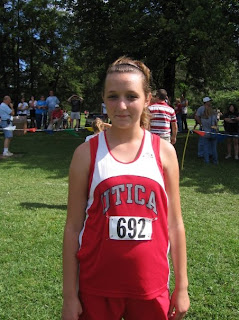 I did receive some great news today from my sister in law, Amie. Apparently my niece, Kayla was able to cut 10 minutes off a 2 mile race in cross country the other day. Amie told me over Facebook because she knew I would want to hear it... She was absolutely right!! I can only imagine how good that made Kayla feel too. It's not easy to take off 5 minutes in a mile, let alone 5 minutes off of two consecutive miles. Way to go kiddo!! I'm anxious to go to one of her track meets when I get back to the states. I can really tell that she's trying hard at this sport and I'm super proud of her!

Tomorrow should be a fun day. I'm on my own for the most part, as Bob has to attend some meetings all day. I'll be here at the apartment by myself working a big change that we implemented today at the office. Tomorrow is really my last "work" day until next Monday. I'm considering sleeping in a bit, and then working here on the couch with lots of coffee and my iPod. When I get hungry I'll just walk down to the train station for some "guy food" (ie. quick and easy stuff). :)

Finally, for my own personal joys, here is a picture of my beautiful wife that I secretly snapped tonight while she was smiling and telling me a story. :) 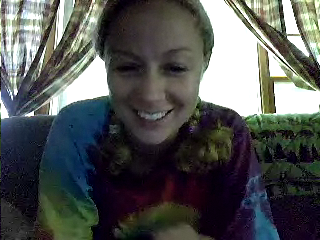 For now, I'm gonna keep waiting on my download (almost done) and will be sure to write up my adventures tomorrow... I have some REALLY cool plans starting Tuesday, but won't share them on my blog just yet... It's gonna be cool though, so please be sure to check back in and see what I'm talking about. ;)
author: Luc @ 3:06 PM