Today was another great day in France. I woke up at 8:30 and headed out the door for a run to town. The plan was to run into town, get some groceries and then take the bus back here to my (suite) village. 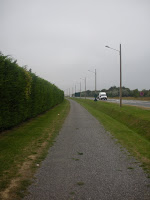 It was sprinkling a little bit, but not enough to worry about getting soaked. I was hoping that it didn't start raining too bad though because I had my camera with me and it doesn't play well with water (duh). Instead of running directly to the city center of Montevrain, I decided to venture off to the east a little bit so that I could get some new scenery this time. It turned out to be a great little course, and I tallied up about 1.5 miles.

When I got into town, I was able to get my shopping done at the grocery store. I ended up with two apples and two banana's (this time I weighed them), a box of apple juice, a liter of Pepsi, a box of pain au chocolats, and a couple of pre-made deli sandwiches. I was much more confident in the super market this time now that I knew how to handle the whole 'check out' situation, and I even knew were everything was at this time. By the time I got out of there, it was 10:35am, which was the same time that the bus left from town back to my village. I thought, that I would just kill a little time and wait for the next bus @ 11:10am. However, but the time I got back to the bus stop, it was 10:50am and I knew that I had about another 20 minutes til it came, so I just decided to walk. It made for a good little morning adventure to town. 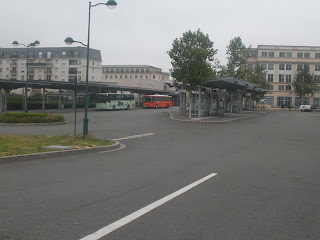 When I got back to my apartment, it was just work really. While I sit here in my apartment, I see a lot of activity in my back window. A few times I've had my french doors open and have started conversations with some of my neighbors. I'm actually getting to know some of them. For example, the neighbor who lives two doors down is a very young fellow named "Jonathon". Mind you, it sounds totally different with a French accent; like "Jhean au teh". I only know this because I had him say it about 5 times before I realized he was saying "Jonathon". :) He and his girl friend live in the apartment and they have a lot of pets: 2 cats, 2 dogs, & 1 rabbit. The rabbit actually chases the cats, it's pretty funny. I took a small video the other day, but the rabbit didn't attack the cat like I hoped it would in the video, so it's not worth uploading really...

Of course, he always has some friends over, so I met a couple of his buddies too. His one buddy's name is Michel and he's from Holland. He actually speaks very good English and has been to the states a few times. His other buddy's name is Clement, and he's from Rome, Italy. They are all in their early twenties and they couldn't believe it when I told them that I was 31. Apparently they thought I was their age, and were blown away when I told them I lived on a farm with a wife and 3 daughters. I kind of felt old for the first time in my life after the shock factor settled. :) I must say that it's kind of cool to know some of the locals here in the village now. I see them out and about and can actually greet them by name now. 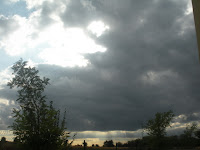 As the day progressed, the weather got really cool, not "weather cool", but "neat, cool". The clouds were still hovering over our village, but there were patches of sunshine and it turned out to be a beautiful night actually. Around 8pm Bob and his team had come back from their day jobs and I headed over there for dinner. Tonight we had chinese food; that's "french-chinese" food. After dinner, Bob and I hung out at the table and capped off a bottle of wine and talked about work until around 1:30 am. After our little meeting, I headed back to my apartment and literally crashed. I remember stumbling up the stairs and laying in bed. Day 15 was in the bag... 4 more days til I can see my girls.
author: Luc @ 11:28 AM