Yesterday was great... It's now 10:15 in the morning on Saturday and I feel like a freight train has hit me. Here is what happened during my first full day in Bucharest with my foreign brothers...

I woke up at 9am to Volli and Henry greeting me. I had never met Henry before, but I've seen pictures of him on Volli's Facebook page. He is 10x cuter in person than in the pictures I've seen. Volli says that he likes me and Yiorgo because he's been really good since we've been around. I think it's because we make crazy faces at him and make him feel like "one of the guys". He is a very quiet and happy baby, and he smiles so much. 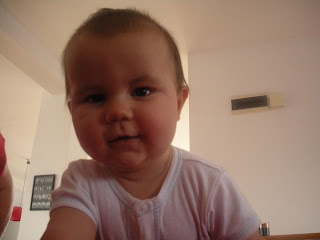 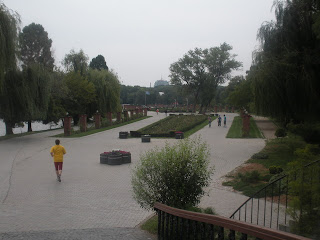 Once the nanny got here to take care of Henry, Volli and I took a nice little 4 mile run around a local park. It was a beautiful park named Herastrau and there was a nicely paved bike path that circled a huge lake. There were a few people out on the path and Volli actually wore his old NHS football pants. :) We ran all around the lake and just talked the whole time. It was so great to catch up with him mono-e-mono and there were a lot of very cool areas to this park. The picture on the left was taken around mile 3 while we were running through a garden area. You can see the lake on the left and I'm standing on a bride taking the picture. You can see Volli (in his cool pants) running through the park. Here is the route that we did: 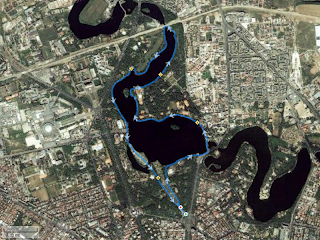 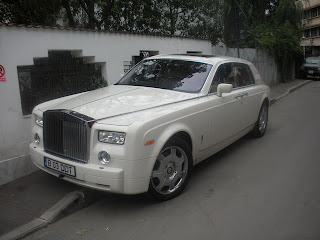 The area that Volli lives in is mixed with a lot of old and new, as well as a lot of rich and poor. For example, while walking toward the park through one of the streets, we saw a pretty plush Rolls Royce car. It was amazing to see so much variety on the streets. We also saw a few Porches and Mercedes Benz cars. Mixed in with all these plush cars were clunker cars too. You might see 4 really nice cars and then 3 broken down cars on the same street. As diverse as it is, it really is a beautiful city. There appears to be graffiti every where, but it doesn't really take away from the beauty of this place. You just have to look past it or else just accept it and consider it part of the scenery. When we got to the park, we picked up the pace and started our run. On our run, we talked about lots of stuff and it was fun to just catch up with one another, mono e mono. 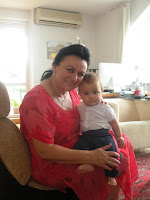 We got back from the run around 10:30 or so and I took a quick shower and by this time Yiorgo was waking up. While we were out, Gena (the nanny) actually cooked an authentic Romanian dish for us guys to all enjoy at the table. The house smelled amazing and I couldn't wait to dig in. There were lots of veggies and a killer corn & egg dish that we had a fun time destroying. :) After dinner, Volli drove us around town to show us some places and get some coffee at a local cafe. The cafe was a newer establishment and the coffee was very good and the owner & waitress were both very friendly. We sat outside on the street and watched the cars zoom around us. It was cool to be sitting around with Volli and Yiorgo again listening to them bicker back and forth. I didn't realize how much I missed that. :) They're like an old married couple that just argue about everything; solid proof that they are great friends. 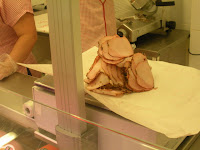 While we were out we stopped at a local meat market and ordered 1 kg of ham. We at a full 1/2 kg bag of ham last night in record time without even blinking. We're all 3 pretty big dudes and it was nothing for us to go through it while sitting around talking. It was amazing to watch the butcher pile up the ham and keep piling it up and up. Volli told her about how we went through 1/2 kg of ham the night before in about 10 minutes. She laughed at us and watching her try to wrap it up for us was pretty funny to say the least. 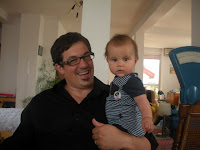 From the meat market, we came back here and hung out with Henry for a while waiting around before we had to go pick up Volli's wife, Stefani. Once we picked her up, Volli took us to his office and showed us around. His office was located in a pretty cool area. It was like a quiet little back street and it felt like an old European village. Again, this is such a cool place, and every corner looks different from the last corner. There is a mixture of old Bucharest mixed with a lot of newer Bucharest; very different from everywhere in the United States.

After we visited Volli's office, we headed into the city center and walked around. There was a festival going on so it was pretty crowded. Everywhere in Bucharest is crowded with cars, so the whole time we were navigating through the narrow streets, we were dodging chaos. Cars would drive really fast up to the stop lights and then just stop right in front of you at the last minute it seemed. Even though there are lines on the road, drivers don't pay much attention to them and just the whole street however they can. Again, this is so different from what I'm used to. 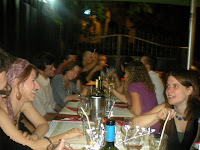 From there, we went to a very fancy restaurant and met up with a lot of different foreigners from all over the world. Volli knew that we were coming, and he had some other friends that had company coming in from out of town, so they had scheduled a big multi-cultural dinner outside and there were about 12-13 of us just sitting around drinking and eating. We had so much fun! We sat at this restaurant until 1am drinking and having a great time. I got pretty drunk. :)

When we got back here to Volli's house, we broke out the 1 kg pile of ham and ate it all in record time again. :) We got a kick out of it and decided that tomorrow night we would get 1.5 kg pile of ham to see how much damage we could do to it. :) Yiorgo, Volli, and I all finished the night by drinking some Romanian whiskey and smoking some cuban cigars that I purchased at Charles De Gaulle airport in France before heading over here. We vowed that we will do this again when we meet up again in the future. 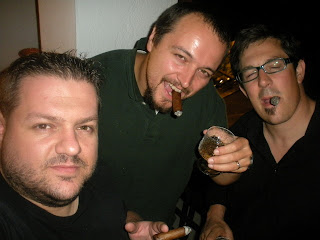 Awww,, I miss you guys,, all 3 of you!! Little Henry is soo cute! Looks big and healthy! Good Post Luc! XOXO-Jen