Today was a great day! I woke up at 7am sharp. This was after a short 3-4 hour nap after my late blog post last night. When I woke up I saw Jennifer online and caught up for a few minutes before my run. 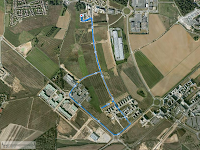 This mornings run took me the opposite direction near the 'industrial' area, whereas yesterdays run was more towards the residential (village) area. I much prefer the village vibe over the industrial vibe and will probably head that way again tomorrow morning. It was cold this morning, but once I got moving, the shivers stopped and I was chugging along enjoying the new scenery.

Here are some pictures that I took on my run: 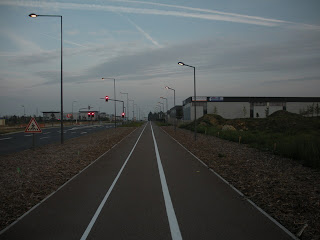 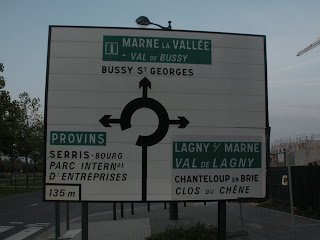 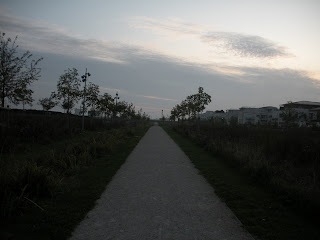 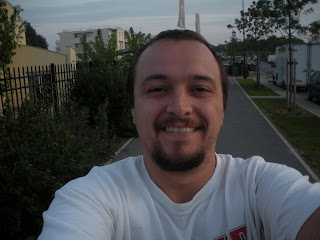 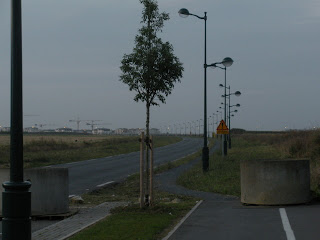 By the time I got back to the office, Bob was waking up and we talked for a while and had some yogurt for breakfast. I then took a quick shower and we got ready to head to the office (not the couch this time) for the day. One of our colleagues, Patrick, was picking us up here by our community area and we were going to drive about 30 minutes to the office.

When we got to the office, we struggled with the alarm system... actually it went off a few times, but to our surprise no cops ever came and we never got called to ensure that things were OK. I'm sure that somebody got called, but we were never hassled for setting off the alarm multiple times. We stayed in here and talked about our project for a few hours and drank lots of coffee.

Speaking of coffee, one thing that I'm noticing over here is that the coffee is nothing like coffee that I'm used to at home. I'm a true-blue coffee drinker and I love my coffee by the masses and the darker the better. I don't really drink coffee to wake up, or get a caffeine fix as much as I drink it for the pure joy that it gives me. :) 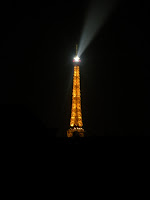 I like hot, black coffee to sip on and this means that I can drink it pretty much all day just like some people drink iced tea or water. I enjoy big cups of it. It's nothing for me to drink a full pot of coffee by myself before lunch time... Actually I do this all the time. :) However, I'm discovering that "coffee" in Europe is actually what we consider espresso. It comes in cute little kiddie size cups and it's a bit frothy on top. I shoot these things down in about 1 minute and end up wanting more... It's been quite an adjustment to say the least. Even our coffee cups in the apartment are "small". But Bob and I drink it like real americans by the cup fulls. It's sometimes frustrating pounding these sissy espresso shots while we're out in public though... 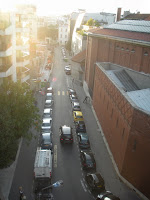 So after we worked at the office for a while, we headed to a local village and ate at a very authentic french restaurant. It was just this little hole in the wall on a residential street smashed between other houses and small businesses. Think of a cliche' European village with a narrow road winding through a hill of compact houses and European cars, and then picture us walking into a restaurant. There you have it. Unfortunately I left my camera at the office, so I wasn't able to snap a picture of the restaurant, or the dish that I ordered. I told Bob and Patrick that I wanted something "french" and they recommended the Perch. I love poisson (fish), so I ordered it and it came with white rice and fried potatoes. Of course, we all washed down our meals with water and red wine. After my meal, I had Patrick order me a nice "french dessert" and it was da' bomb!! It was called a floating something, but it was basically this glazed meringue that was floating in a sweet egg sauce. It may sound discusting, but it was surprisingly good!!

After dinner, we headed back to the office and worked for a bit longer on some geekery design stuff and sipped on some more sissy espresso. 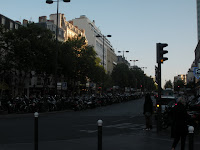 Then around 6:00 we headed into Paris to hang out and have some dinner. On our way to Paris, I was able to catch about 20-30 minutes of a cat nap. I've only had about 8 total hours of sleep since I've landed and it was catching up with me. By the time I woke up in the car, we were stop & go in traffic along the Sienne River right in the heart of Paris. Our goal was to first stop at Patrick's apartment to drop off our bags and get a drink or two before heading to the restaurant where we had reservations for 8:30pm. 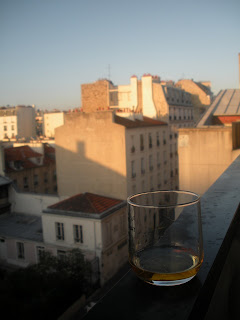 Patrick's apartment was really cool. It was just this little 1 bedroom apartment on like the 5th floor and it had a really cool feel to it. We hung out and drank some Irish wiskey and shot the breeze for about 30 minutes or so. He had a small balcony that looked over a tiny road in the heart of Paris. From his balcony, you could see the Eiffel Tower, Les Invalides (where Napolean Bonaparte's tomb is located), and the Basilique du Sacré-Cœur waaaay of in the distance. Even directly below his balcony was a museum with sculptures out front. Best of all you got to see the city life of downtown Paris whenever you wanted to just by stepping out onto the balcony.

So anyway, we hung out here and had a few shots of whiskey after a full day of geeking out, and then headed toward the subway to get on train toward the restaurant. The subway is still pretty cool to me. Basically you buy a ticket for about 2 euro's (~$3) and you can pretty much go whereever you want in the city. Of course they have deals where you can buy day passes or week passes. But if you just need to go somewhere on the other side of town, you buy a ticket and hop on the metro... Voila, you're there! 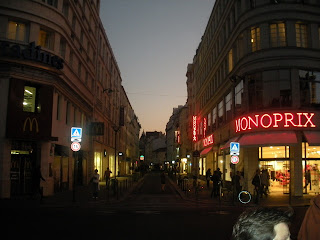 As we walked along, I soaked in the vibe and just love it. People were sitting at little tables outside of restaurants, motor bikes are zooming by, people are walking super fast to nowhere in particular, and every now and then you'd see couples holding hands walking very slow down the streets just enjoying each others company. It really made me wish Jennifer was here to see it all with me. Next time for sure!!

We arrived at the restaurant a little bit late, but immediately it felt good to have a reservation because there was a crowd outside. We walked in and sat right down. This was a little Basque restaurant that had a very authentic French vibe to it. It was another little hole in the wall place with about 12 - 15 tables and very compact. The food was AMAZING!! 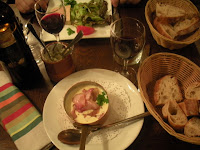 We of course started with some wine, yes I'm slowly becoming a wine-o... be warned for my return Jennifer. Along with our wine, we had some french bread and just hung out and talked for a while. For an appetizer I got a pouched egg soup with mushrooms and bacon. It was delicious!! After I scarfed that down, our main course came and I had ordered the venison sweetbreads & kidneys. It was pretty french and isn't served in the states for safety reasons (which is more or less stupid), but it was really good. Different from anything that I'd ever had but good. I'm forcing myself to try new things while I'm over here this time, and it's working out pretty good. I've been discovering a lot of really good cuisines so far. I wasn't able to eat the entire plate because I was pretty full on whiskey, wine, bread, and pouched egg soup. 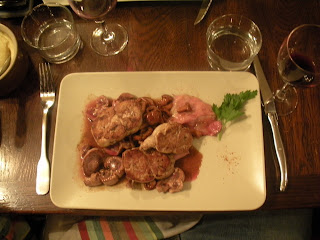 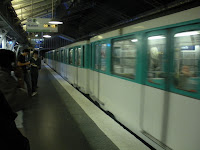 We hung out for a little while longer and shot the breeze over some sissy espresso :) and another drink at the bar before heading back to Patrick's apartment. When we got back to his place, we had yet another shot of sissy espresso chased with another shot of liquor and then Bob and I took his car back to our apartment here in Montevrain. It was about a 30 minute drive and here we are updating our blogs. :)

Tomorrow, we are heading back to the office again for more geekery and that is really all that's on the agenda so far. Who knows, maybe we'll hang out in Paris again, or maybe we'll just come back here and order some delivery again. Either way, I'm gonna soak it up and enjoy the crap out of it. I didn't get a chance to talk to the girls tonight, and will try to connect with them tomorrow over Skype again. I also plan to purchase some post cards and send them to my girls so that they can have them for years to come. I know they love it when I do that on my trips...
author: Luc @ 5:07 PM

I've been keeping up with your Paris adventure daily! I really don't see how you find the time to do everything -- you're certainly making the most of it. You have great discipline to be able to work in that environment!

Jennifer - I knew you would like that. I didn't know that we had so much "french" influence near our stomping grounds. :)

Ed - I love it! I realize that these types of trips are few and far between in my lifetime, so I really try to (as you said) make the most of it. Thanks for reading!!