Tonight, I have officially made the switch to: Barefoot Luc 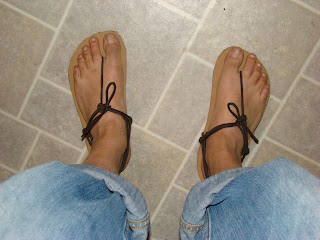 I've been looking around for some minimalist shoes, and the solutions are either very expensive, or very cheap. There is a site that sells "normal looking" shoes with very thin soles, but the prices are through the roof, since it's such a niche market. The alternative is to just go to your local Target or Walmart (like I did) and buy a pair of aqua shoes. The only problem with aqua shoes is that your wife (or husband) could make fun of you (like mine did).

Honestly, I haven't worn a real pair of shoes for almost 2 full months now. When I'm in the house, I'm barefoot. When I'm running, I'm in my VFF's, and when I'm "in public", I typically wear my aqua shoes. Although lately Jennifer claims that my VFF's are better suited for public than my aqua shoes. Perhaps it's better to look extreme than it is to look like I just don't have a clue. :)

At first my legs and feet hurt quite a bit, especially after running. However all the pain has gone and I'm excited to be au-naturelle from the ankles down until winter sets back in. Up until today, I didn't really have a solution for sandals, and refuse to limit my options to just flip flops. I put on my Chaco's the other day and gave them about 10 minutes before they really started to hurt my arches. Chaco's are known for having (almost too much) arch support. They are officially Ebay bait. Anybody interested? I have black ones and orange ones, both are fairly new...

Anyway, I've been reading up on many barefoot runners who run in these things called "huaraches". They're nothing more than a piece of shoe sole and string. Some people have been known to make them out of old racing tires. It was time for me to try and see if I could make them. I've watched the video on how to make them a few times and decided to give it a try. They looked simple enough to make...

For lunch today, I drove to a local shoe repair store (Newark Cleaners and Shoe Repair) in Heath, Ohio, and got a scrap sheet of some very thin Vibram material along with two long leather shoe laces. The total for everything so far was $4.28. I took it home and decided not to mess with it until sometime later in the week...

Well the more and more I thought about it, the more I was dying to try and make them. It was going to drive me crazy til I did it. So I took off my VFF's and got started:
Viola: 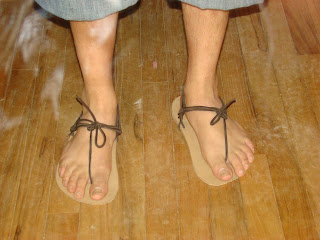 These are my new running sandals when I need to run on the road. I will probably only use my VFF's for trail running from now on, as they're much better for floating over jagged rocks and snapping little sticks than these will be.

Once I'd finished my pair, Lizzie said she wanted a pair, so I made her a pair too. She is going to wear her's to school tomorrow. :) Of course, once she had hers, the other two wanted a pair as well. Looks like I'm going back to the shoe repair store pretty soon. :)
author: Luc @ 8:01 PM

Great sandals. Those look a lot like the ones the Tarahumara Indians wear. They wear something similar, with a think layer tied by one string that goes around their ankles. If it works for them they can't be bad for you.