I had another great run at Mohican yesterday. Nick and I were supposed to meet up and run the Red and Green loop. However, there were a few last minute changes (ask Nick for details) :) and we decided to do "Plan B" and run with the Forget the PR 50k runners. Rob had scheduled a familiarization training run for the runners of the upcoming race. Everything, worked out great, and I was happy we resorted to the Orange loop! I'll probably end up doing Red / Green blindly at the 50 miler this summer. (?) 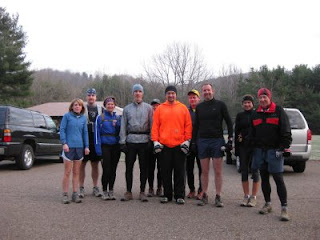 Michelle, Nick, Paul, Cheryl,
Me, Mark, Rob, Traci (I think), and Don
I knew this was going to be a fun run for me because we were doing the Orange loop backwards. I've ran the Orange loop 3 or 4 times now and I've always run it the other way coming from the Covered Bridge, up and around to Campground A. This time we met at the Campground A area and headed up into the forest to the Covered Bridge. Looking at the map below, we started at the 'Start / Finish', ran to Aid Station #1 (which I missed), then to Aid Station #2, then back to the 'Start / Finish'. 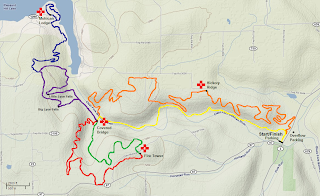 I woke up at 4:30, piddle-farted around in and out of consciousness til about 5:30, when I officially woke up. Of course, I made my coffee. Then I scarfed down a quick bagel and headed up to Mohican. We all met up and started off for the trail at 8:10. Immediately I was right in the middle of the front runners and the "back of the pack" runners. It was kind of nice to be running by myself actually. I mean, I do it all the time, only this time I was at the beautiful and trecherous Mohican running by myself. This run actually built my confidence up and I truly feel I could come up here and run it by myself anytime now; at least the Orange loop. :)

There were a few times where I crossed paths with Nick and I saw Rob once or twice as he was going between the two groups. However, I was not relying on them to tell me where to turn. Typically, I rely on one of them or Kim to keep me on course so I don't get lost. This time, I knew to just follow the signs for "MTB100"; they are posted at most places where the trail splits.

Somehow, I completely missed the Hickory Ridge aid station. I thought I had been running for a too long at one point and knew I had passed it. All the sudden I run up on Nick, and asked him about it. He said it was about 2 miles back. Apparently I turned left when I should have turned right or something. The good news is that I got a little extra distance in. We synced our watches and I had 7.4 miles and he had something like 7.2. Whatever, I didn't need a refill or a break by that point anyway. It felt good to just be out on the trail running.

More time goes by and more trails are consumed. Then, by about about mile 11, I'm starting to bonk. I went reaching for my other gel pack, only to realize I had only brought one gel pack! Unfortunately, I had consumed it at mile 4. I was sure I packed 2, but apparently not. This meant that I had to go 4 more miles with no fuel and I was on empty. Stupid, stupid, stupid!

As I rolled up on the Covered Bridge I saw Nick for the last time and he pointed me to the (obvious) water jugs. :) I filled up my two water bottles and headed down the Hemlock Gorge Trail. This is a beautiful trail that follows the Mohican River for about 2 miles. Absolutely gorgeous... and pretty technical at parts. This meets up with the North Rim Trail which goes along the Camground A site. I think I might have screwed this route up because I remember there being a really steep climb on the end of this section. However, I didn't see that at all on this run. I think I know where I screwed though, so next time I'll be sure to keep going strait instead of turning right. Besides, I was spent on this one anyway and McDonalds was calling my name. :) 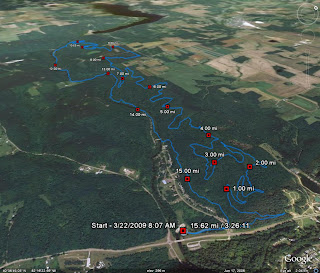 After my run, I stood around to talk with Mark Carroll for a while. He and I talked about various races and our goals for 2009. Mark was there on my very first Mohican run (along with Nick, Kim, and Rob). I'll never forget it! I showed up for a 15 mile run with a bunch of people that I'd never met. I had never heard of organized trail runs before that run. The only way I found out about that particular run was because I had subscribed to Trails and Tribulations podcast, and one of the hosts of that show was Kim! Somehow, I found her blog and she posted something about a training run up at Mohican. I thought... what the hell, and the rest is history. It was great to see Mark again. Apparently, we've crossed paths at a few races (Pinckney Trail Marathon & Indian Run 60k) and we didn't know it until afterwards. :) Great seeing you again, Mark!

Before heading home, I stopped at McDonalds and devoured a BigMac value meal in record time. When I got home, Jen and I took the girls up to Blackhand Gorge and we walked 2 miles while the girls rode their bikes. What a perfectly perfect day!
author: Luc @ 5:32 PM

Looks like you guys had fun on Sunday, sorry I couldn't join you guys for the Mohican run. As someone who's dabbled in map making (I did the Mohican100, 50, and 50k maps) I'm really intrigued by the google earth maps you've posted. How do you sync up your Garmin to a Google map???? Shoot me an email at runmikeyp@hotmail.com if you don't mind divulging your secret :)