Today was a fun day. I woke up at 4am (after a 2 hour "nap") and got ready to head up to Mohican State Park to meet up with Nick for a 21 mile trail run. We were going to run the Red/Green loops. We had planned on meeting around 6:30 so that we could drop off some water and feul at various spots around the forrest. I left the house around 5am so that I wasn't late.
Torrential Down Pour
It poured down rain the whole way up. I was wondering what the hell I got myself into as it rained harder and harder the further north I got. I arrived at Campground A around 6am, so I still had 30 minutes before Nick would be there. I tried to catch a quick cat-nap, but that didn't happen.
Placing Drop Bags
Nick showed up and I hopped in his car so we could go to the various drop off locations before we started our run. This is where things got interesting. :) We dropped off some water and brownies at Rock Point, and then headed to the Bridle Staging area to drop off a couple of bottles of water. All the sudden, Nick's car jolts and he is stuck. I mean STUCK! He put his car up on a cement culvert that was surrounded by thick juicy mud. We tried to get him out and saw that was going nowhere, so he said a few choice words and then hopped in my car so we could get started on our run. It was around 7:15 at this point and the sun would be coming up soon. Oh yeah, it was still raining pretty good.
Rainy Start

We started from the Covered Bridge and ran up the Red loop in the dark with our flashlights. About 2 miles into the run, the sun was peaking out and the fog was rising. The trails were very soupy and sloshy. It was perfect! When we got to the Bridle Staging area, we tried a few more things to get Nicks car unstuck since we had some daylight now, but to no avail. We didn't do anything but cover ourselves in mud.
Red Loop Mud
We trekked down the course and made our way to a river crossing which was pretty damn cold, but fun. We were completely soaked by this point (head to toe). The goal was to stay moving at this point because the weather was dropping, but the rain was still steady. This means that you only stop when you have to otherwise, hypothermia would set in. Each time we stopped for even a minute, the cold would get into my bones and I would start to shake profusely. Once we got moving again, the blood would start flowing and I would warm up though.
Rock Point
We decided to cut out run short so that we could have enough time to call AAA to get Nick's car unstuck. When we got to Rock Point, we completely destroyed some yumalicious brownies that Nick brought and then decided to skip the Green loop and just run the Red loop back to the Covered Bridge. As it turned out, this was the best thing to do all around: it was cold and pouring, we were not well dressed for the weather, his car was stuck-stuck, and I wanted to get home and hang with my girls.
Done
We trudged back to the Covered Bridge and finished our run at only 12 miles. It was a hard 12 miles though if that counts for anything. :) Anyway, I changed into some warm/dry street clothes and we called AAA. While we were waiting on the truck, we headed to McDonalds and ate like we hadn't eaten in weeks. We each got a Big Mac meal and I barely remember tasting it; I think it was strait to my stomach and bypassed my mouth. So good!
Nick and I had a great time, despite the car problems. It was fun sloshing through all the thick mud and just getting out in the elements. We'll be doing this again soon! 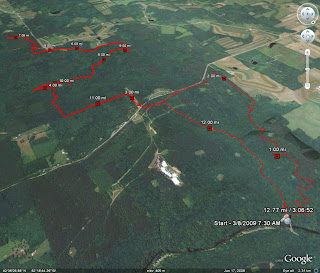 I am going to put this on Nick's as well. That was the funniest damn thing I have read on a blog ever! What a freaking adventure and way to go get the run in you two.

Can't wait to get back up there again. Hopefully with my Jeep this time and no issues.
I just need to wake up on the other side of the bed.
I wanted to go back to McDonald's so bad today but I didn't.