Today, I took a fun run with my buddy, Jonathan. He lives in Columbus and took the long drive to meet me over at my house (way out here in hick-town). He and I took a 30 mile bike ride the week after my marathon and we had a blast! We rode all the way from Newark to Johnstown and back on the bike path. During that ride I invited him out to my place to do some trails with me. He took me up on that offer and we hit the trails today.

We started off by parking at the Blackhand Gorge bike trail parking lot. We ran from there over to Marie Hickey trail. Jonathan kicked butt! The road to Marie Hickey was pretty hilly and he burned through it like a pro. We kept a slower pace, but we didn't do any walking really until we hit the parking lot to Marie Hickey. Even then, we walked for about 30 seconds and got right back into it. Once we got on the trail, we really felt the relief from the shade. In the woods it was about 20 degrees cooler than out on the road under the sun. Jonathan ran about 2.5 miles without stopping and even then, it was mainly because we were on a hill.

After conquering Marie Hickey trail, we headed back down the road back to the bike path. We hit the bike path at about 4.6 miles into the run and Jonathon was doing pretty good. He had a quick dizzy spell, but I think it may have been due to his first introduction to GU @ around mile 4. :) By the time he got the dizziness out of him, we were at the Quarry Rim trail and we decided to take it easy up the hill and then pick up pace once it flattened out. The trail was beautiful as always and we just jogged real slow through the woods with no hurry. We came back out on the bike path and made a pit stop at the Blackhand Rock overlook to admire the river and beauty of Blackhand Gorge.

Jonathan kicked butt today and I really enjoyed his company. He showed up with the agreement to run 5 miles with me. However, I was able to sucker 6.57 miles out of him instead. :) Not only was it farther than he'd ever run, but I'm sure these were probably the hardest miles he'd ever run. We even talked about how running on flat roads will now be considered the "easy miles". :) I'm hoping that I converted him to a trail runner, as he did claim that he enjoyed the hills, rocks, roots, and woods when it was all over with. Unfortunately, I think I may have grossed him out when I squeezed all of the sweat out of my headband at mile 6. :) He was warned that I sweat a lot while running, but even I was surprised at the 2 liters I rung out of that little thing. None-the-less, it was a nice change to actually be in good company and shoot the breeze with a bud out here for a change. Thanks Jonathan!

Even better, I may have talked him into joining me @ Hocking Hills next month for the Indian Run (5k or 10k), but we'll have to see. :)

The details of our run are found on BuckeyeOutdoors.com (see right sidebar on my blog), but here is the map: 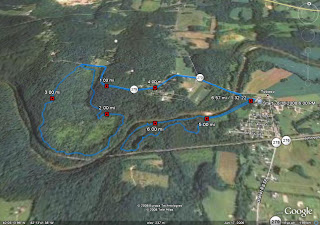 Here is the elevation:

I've got to make it over to Blackhand Gorge. I have heard it was really nice.
I've heard good things about the trails over in Licking County but never took advantage of them. Too bad since I just live in Fairfield County.

omg! thats a great story!
haha yeah you convinced me ill be running one of those marathons with you! haha omg how sad it is that i just checked my email lol sorry i should have read this sooner.