Tuesday started like any other day. I woke around 7 or so, did my jail cell worked out, showered, and headed down for breakfast. I was pretty excited to get back to Bob's since I had learned quite a bit about EmberJS from PeepCode's tutorials. I had gotten the "Aha!" moment late last night and was anxious to apply what I'd learned. 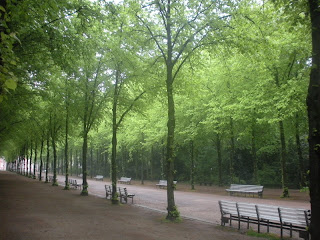 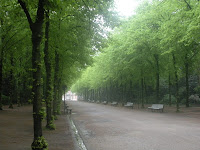 He and I worked together at the table up until lunch and then decided to head out for lunch at a quiet little Italian restaurant near his flat. We both ordered pizza and sat around and shot the breeze for a while afterwards. Bob was trying to "learn me" networking tricks, so we ended up staying longer than usual... Who am I to interrupt IP routing techniques?

As we were leaving the restaurant, it had began to sprinkle a bit. We made it back to "the office" with damp clothes and geeked out for the rest of the afternoon. Around 5pm I headed down to the hotel and got ready for a nice evening with Bob and Michelle. 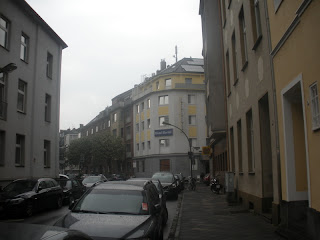 Around 6:30, Bob and Michelle arrived at the hotel and we all walked a few blocks away to a nice restaurant named Zum Hirschchen for dinner. I ordered a genuine German dish of steak w/ mustard sauce, potatoes, and salad. What is a German dinner without beer? That's right... it isn't. I had a few beers to help wash down the deliciousness. 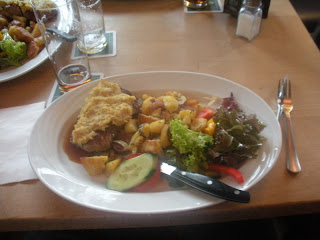 When in Dusseldorf, drink Alt beer. Kolsch beer can only be consumed in Koln. At least that is the motto. It's very similar to OSU vs. Michigan. At one point, Bob noticed that his Alt beer was in an Kolsch glass. This is wrong on many levels and it deserved a picture. I'm sure the tables around us thought we were nuts. We took about 20 pictures of this glass because it was hard to get the word "Kolsch" into the picture. 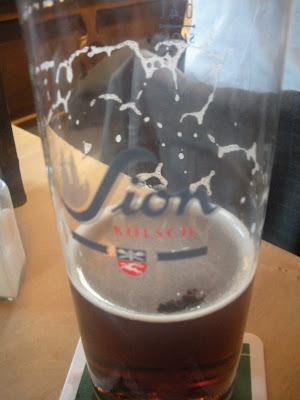 We stuck around the restaurant for quite a while and had great conversation along with a few too many shots of Jagermeister. Thanks for the great night Bob and Michelle!! 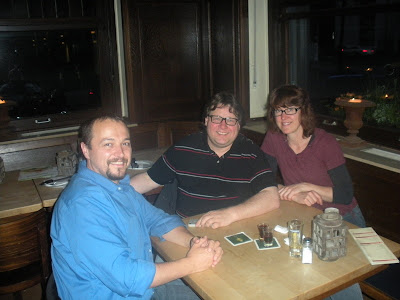