Today was a great day! I slept in until about 11 am. Since I had already missed breakfast and didn't have enough time to head to the Altstadt for breakfast, I decided to dig through my goody bag from the Marathon and "make due". I feasted on pretzels, salami, apple juice, a bag of peanuts and an apple that I snuck out of the breakfast hall yesterday morning. It wasn't the healthiest of lunches, but it worked. No coffee. 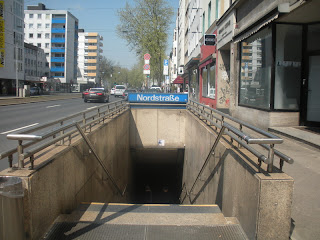 Today, I was going to go see Nick's football team play a game of American Football on the south-side of Dusseldorf. It was about 6 miles away and Michelle generously offered her train pass for me to use. This saved me about 5 euros since I wouldn't have to buy a ticket. Bob was able to explain my route over the phone and I took detailed notes. It was pretty fun riding the UBahn by myself through the main train station and out into the burbs. I arrived in Tipplesburg and a few local bike riders were able to point me to the right direction once I got off the train. I was happy they spoke English and had an iPhone with GPS to help me. :) 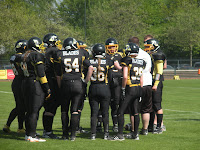 I arrived at Sportspark Neiderheid right at 3pm. The game had just begun and I found a comfortable spot on the sidelines where I got to watch Nick in his element. He is the coach for the Dusseldorf Blades woman's football team. He basically just paced back and forth along the sidelines "coaching". :) The weather was absolutely perfect and everybody ended up with a little bit of sunburn today! Sometime before half time he spotted me in the crowd and came over to say hello. The girls played a good game, but ended up losing to Berlin with a score of 42 - 19. It was a great game and I had a lot of fun; I actually got into it a few times on the big plays. It was a lot of fun! 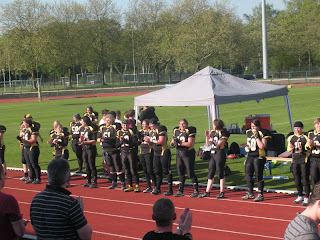 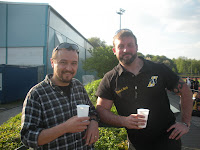 After the game, Nick and I headed back to his place so he could change. He had a nice place in a quiet neighborhood. Once he got out of his coach's uniform, we headed to a nearby restaurant called Scotti's and had some burgers and fries with his team. By the time we had finished eating, it had gotten pretty cold. We decided to head back to his place so he could grab his jacket before going out for the night. 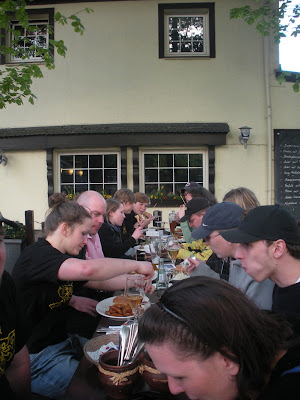 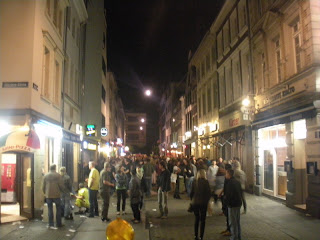 We ended up going to the Altstadt around 11 pm with his friend Vera, from CrossFit. We went from bar to bar, and Nick knew quite a few people at each place we went to. He used to be a bouncer at a few of these places, so we would show up to the door, he'd shake hands and catch up with the bouncers as they rattled off some German. The next thing we knew, we'd all go in the door and have shots or beers delivered to us. Awesome! 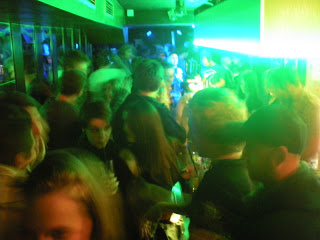 We hung out at the Altstadt until about 2 am and then I stumbled back to my hotel room in the chaos of the crowds. It's amazing how busy the Altstadt is at night. During the day it's a beautiful cobble-stoned oasis filled with restaurants and shopping. At night it turns into a party jungle with bars and lights. I love it!! 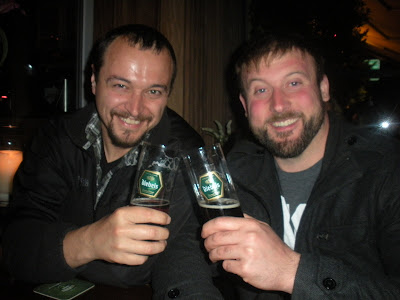