A good friend of mine was killed in a fire two weeks ago and it's still hard for me to believe. Here are some of the news feeds that describe what happened:
Those headlines suck! It's been a hard pill to swallow. I can't imagine how hard it has to be for Mikey's wife, Katie, who's still fighting her fight from that crazy night. Jennifer and I are pretty good friends with his brother Tom and Tom's wife, Melissa. It was real hard to know that Tom's kids lost their Uncle Mike; they just loved him and he really loved them too. Mikey was still a little league all-star to his parents. And he will always be laid back "Brotha Mikey" to all of us. :( 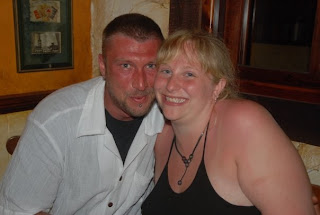 Mikey Ashcraft was a hell of a dude. He's one of those guys that didn't have any enemies. People say those types of things when tragedies happen, but this was the truth. Mikey was friends with everybody. In high school, he was friends with a lot of us "band geeks", yet he never played in the band. He was a football / baseball player, yet he hung out with all kinds of people. Most importantly, he was friends with me... and I was friends with him.

I won't put up all the cliche quotes about how Mikey liked everybody and didn't care where you came from. Nor will I go on and on about how he always put others first and that he found humor in every situation. I simply wanted to tell a single story about a great time that I had with Mikey...

Back in 2002, Jennifer and I had just had Lizzie and were at a point in our lives where our old "party days" were over. It was time to buckle down and raise a family. We were all huge Dave Matthews Band fans and they were coming to Ottowa, Canada for an epic 4-20 show that still goes down as one of the best DMB shows of all time by many DMB fans.

Mikey had to work late that night. He was employed by BlockBuster at the time, so Tyler and Drew were going to wait until he got off of work before beginning their journey. Jennifer and I, on the other hand headed towards Buffalo, NY to get checked in to our cabin at a KOA Kampground. Buffalo was the 'half way point' and they were all going to meet up with us later that night. We waited and waited, and eventually fell asleep with the door unlocked so they could all come in and sleep once they caught up with us... As it turned out, Mikey didn't get off of work until midnight and they got off to a much later start than they had anticipated.

That next morning, Jennifer and I woke up to an empty cabin... nobody else was occupying the other bunks!? Did they make it? Where were they? Upon further investigation, we found a hobo sleeping on our front porch in a sleeping bag; it was Tyler. There was also a car nearby with large feet in the windshield; it was Mikey. Drew was probably sleeping in the back seat. I don't remember... The story was that they left Newark around 1am and drove through the night, driving about 40 miles past the exit, only to turn around and come back and sleep in the car for a few hours. We actually have some old video footage of Jennifer and I kicking Tyler's sleeping bag trying to wake him up. I can't wait to find it someday so we can laugh about how awesome that trip was. :)

One of the craziest memories from this trip that I remember the most was that Mikey wore a heavy knit hoodie, cut-off shorts, and open toed sandals. We were spending the weekend in Canada, and it was early spring! It's still very cold in Canada this time of year, and the concert was in a stadium.. OUTSIDE. Not only that, but we were also planning to drive down through Niagara Falls on our way back to Newark, and the mist is cold. When I asked Mikey about his attire, he just smiled and played it down. :)

This was Mikey. He lived very haphazardly and didn't worry about silly things, like warmth, or hypothermia, or frost bite. :) He just knew that he was taking a road trip with a bunch of friends to see Dave Matthews Band play a live show in Canada. Everything else was just petty details... 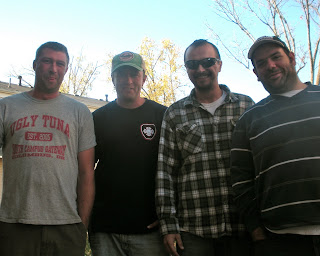 Last fall, Tom (Mikes brother), Bub (a.k.a. Tyler), and I drove to Columbus to visit Mikey for the day. It was a beautiful day and we had a lot of laughs. We all sat around and talked about all our crazy memories together and just enjoyed each others company. I think I talked to him once or twice on the phone, and of course I wrote on his Facebook wall a few times, but... Last Wednesday was his funeral. I tried like hell to focus on celebrating his life. However, I struggled real hard. A few times I was consumed with mourning his death. He had touched so many peoples lives and it was obvious that he wasn't partial to once group of people. I feel honored to have called Mikey my friend. He was.

We are still saying our prayers for his beautiful wife, Katie. They hadn't been married long. Jennifer and I only met her once when they came out here to visit a few years ago. She was a perfect fit for Mikey and it was obvious that they were a perfect fit for one another. Unfortunately, Katie is still fighting her battle from the fire and we are all so happy to know that she is going to pull through this terrible tragedy. I've heard all kinds of stories about what happened that night, but only Mikey and Katie really know what happened inside that apartment.

We will miss you Mikey! Thank you so much for all the great memories. I'll see you again on the other side with a Camel Wide and cup of coffee in hand... :)
author: Luc @ 11:13 PM

Email ThisBlogThis!Share to TwitterShare to FacebookShare to Pinterest
tags: friends

Sad to hear about the fire; this is a lovely post for your friend. He sounds like a great guy!