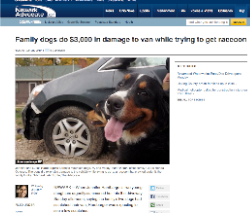 Our dogs made the front page of our local newspaper, the Newark Advocate today (direct link). Needless-to-say, it's been quite the story. Each person we've explained it to has been pretty amused. It was quite the hit at the local Sheriff station. I guess our insurance company (Cincinnati Insurance Co.) has sent the story around internally to share it amongst their staff. Of course everybody we have to tell the story to can't believe it. My wife posted the pictures on Facebook and it's gotten shared by numerous people (including myself). :P Enough people thought it was worthy enough to make the local paper, so we called and they were right. It made the front page! :)

Once I stop and think about it... yeah, I guess it is pretty bizarre.

Here is my side of the story:

Dan and I were 2 hrs into our drive home from Pennsylvania and we're rocking out to some old school Motley Crue. I get a call from Jennifer and pick up the phone:

"Wassup girl?!..." I say loudly with the window down and my cool shades on.

Immediately I start thinking one of our girls got hurt or something.

"Ok, tell me what happened please."

She says: "The dogs destroyed our new minivan...", and then she explained it all to me in detail. I couldn't believe it.

Apparently, the girls went out to play and came back in screaming that 'the dog's had scratched the car really bad, Mommy!'.

Jennifer just thought it was a regular scratch and went out to see what they were talking about. She saw plastic pieces in the driveway, but didn't think anything of it. That is until she got on the other side of the van and saw this: 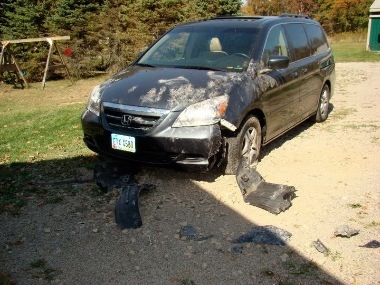 She could only cover her mouth and cry. The van was 3 weeks old and was now un-drivable. The dog's "went to town" on it. Of course, the dogs were sunbathing at this time and thought nothing of it. Just another used up chew-toy. Right? 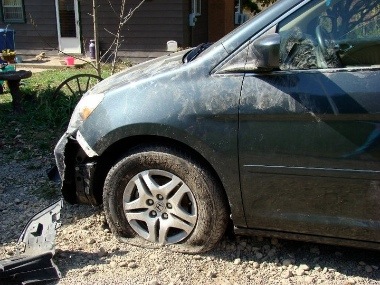 We had no idea why they would do this, but there was nothing I could do for her. She was extremely upset and the girls were all crying. I told her to just calm down and try to calm the girls down. I'd be home shortly.

As Dan and I drove down Toboso Rd. we saw the Sheriff in my driveway and everybody was outside gathered around the carnage. I couldn't believe what my eyes were seeing... 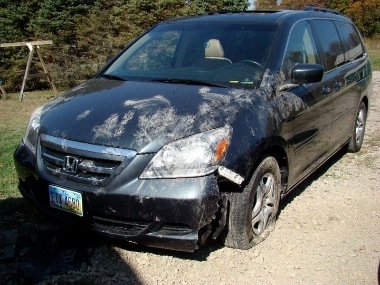 The front drivers' side has been fubar'd: 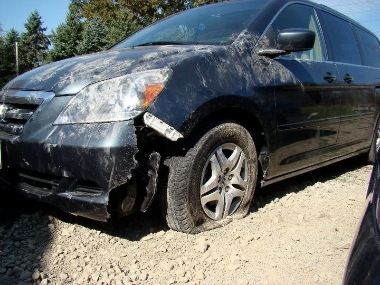 The front tire has been chewed through in multiple places and entire front end of the van is covered in claw marks.

"Why," you might be asking yourself "would two loving family-dogs do this to a beautiful 2006 Honda Odyssey?"

As it turns out, there was a pile of raccoon feces under the van where the dogs had trapped a raccoon. Rather than patiently waiting for it to come out from under the new van and play, they decided to completely destroy the minivan instead.

Here is a picture of our youngest dog (taken 4 months ago), Ivy: 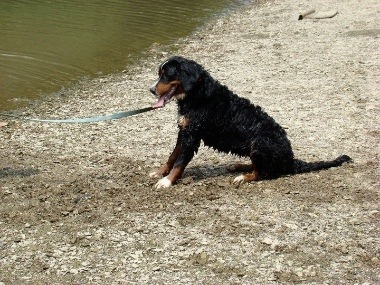 Here is a picture of the older (wiser?) dog, Valley: 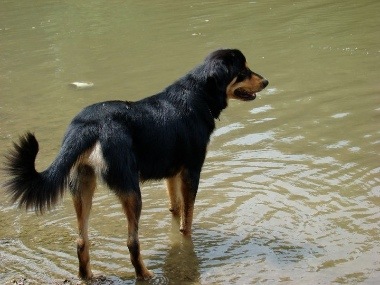 They have been tied to their doghouses for the last 5 days in "time out". People have been coming and going and can't believe that these nice friendly dogs did such a destructive thing. We just released them today and they have been running around releasing their energy. We think that they finally "get it": Don't use Mama's new minivan as a chew-toy.

They're already back to their normal selves tearing up our yard in their never-ending-hunt of the local mole.

This was freaking hilarious!
(Of course it was not my mini-van)

That makes my dogs ripping off the downspout in pursuit of a chipmunk very tame!