Yesterday was my longest long run of the season since my Forget The PR 50K. That race put me in a hospital boot for a week due to my poor approach to being a "minimalist" runner. Basically I had got my VFF's, decided I was going to run in them, and did. I didn't do any of the prep work that went into transitioning from a shoed runner to a barefoot runner; I just did it. Oops.

Anyway, I had trained all summer in my VFF's and it has really changed the way I run. I'm still slow, but I'm a more elegant slow now. I now land on my forefeet and watch my every step. I now lean forward with my ankles after Dan told me about some "Chi Running" book (which I still need to read). I really believe that I can run farther and less strenuous in my VFF's than I ever could in my shoes. Yesterday was my day to prove this point.

Dan (ma dood) was gonna run with me on this run. I had sent around an email earlier in the week to invite other runners, but nobody responded except for Dan. I decided to arrive at Mohican a little early so that I could drop water at Rock Point and and a few other areas. I got to the area around 7:15am and went looking for where I thought Rock Point might be. I drove around for about 20 minutes and then ran into Rob, Michelle, and Terry & Mark Lemke. I asked how to get to Rock Point and Rob told me that I was pretty much off course. He gave me directions and I started heading that way. About that time, Dan called me and said that he tried to get down to the Covered Bridge, but it was blocked off. I told him to meet me at Bridle Staging area, so I headed there to meet him. By this time it was around 8am. Dan and I drove to Rock Point to drop water, then to the Fire Tower and again where the Green loop crosses over RT97. 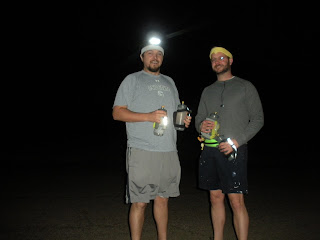 Old pic, but I didn't have a camera today

We got back to the Bridle Staging area around 8:20am and started our 21 mile journey through the woods. This was the first time I'd been on the "official" Red loop in a very long time. I think the last time I was on this was when I ran with Nick, Bret, and Luca sometime last spring. I forgot how cool this loop was. We did the river crossings and the water was pretty low on most all of them. The last water crossing was pretty deep and Dan tried to keep from getting his feet wet. It backfired and he actually got more wet than I did, but he spent more time doing it. :)

We arrived at Rock Point and chugged our water. Dan fixed his feet for a few minutes, then we began on the Green loop. The last time I ran the "official" green loop was at last years 50 miler. We ran into a few horseback riders and a few donkey riders as well. :) It got pretty sketchy after crossing RT97. We made our way up the hill after the road crossing and then trekked down some gravel roads to the "big hill". This is where I got a little turned around. I wasn't sure exactly which way to go, so we ventured down each of them only to realize that I STILL didin't know which way to go. We picked one and stuck with it and it turned out to be pretty close (if not exactly correct?), for we were able to make our way back to the FireTower after some long journeys along the gravel roads.

I must pause and mention that VFF's and large gravel rocks don't get along too well. My feet are pretty bruised today from walking on the gravel for so long. I'm sure Dan was a little frustrated as to how slow I had to move through here, but I (truly) couldn't go any faster. Each step hurt pretty bad. This is the one downfall to my VFF's and I may have to do some research to see if there is going to be many gravel roads at Oil Creek. If so, I may need to incorporate my Cascadia's on some of the sections...

After the FireTower, Dan and I were pretty spent. The heat was getting to us and we were drenched in sweat. Luckily the water that we dropped at the FireTower was still pretty cold so we took turns dumping it on each others head. It was so cold that it actually took my breath as it hit my neck. It definitely helped and I could feel my core cooling down after this. I'm sure the people that were playing football there thought we were quite the spectacle. :)

We journeyed from the FireTower down to the Covered Bridge and I had to hobble over more gravel through here. After the gravel sections, I was able to run, but it was a slow-go on each service road we came to. It kind of sucked actually. Regardless, we made it to the covered bridge and kept right on trucking up the road to the beginning of the Red loop. The Green loop was officially conquered and now we just had to tie up our loose ends on the Red loop. It was a 3-4 mile jog (uphill) to the Bridle staging area.

We journeyed up the hill and had to pause every now and then to allow the Mountain bikers to pass us. We did that about 7-8 times and then we were able to split off of the mountain bike trail and onto the horse trails. The horse trail was a bit more steep, but we weren't surprised by fast riding mountain bikers anymore; a welcomed change. We made our way to the section that follows RT97 back to the Bridle Staging area and I had gotten a 3rd (maybe 4th) wind. I picked it up a bit, even though the balls of my feet were pretty bruised from those damned rocks. We got back to the car with 20.37 miles. I think I did screw up the course somewhere before the FireTower, but I didn't care at this point. :) Our map can be found on my BuckeyeOutdoors.com.

Upon arriving at the cars, I toweled off my sweat, changed my clothes and then we sat in the shade to chug some Gatorade and gorge on some cold Pizza. Thank you, Dan!!
author: Luc @ 7:30 AM

Nice work Luc. I also hate the mountain biker aspect of multi-use trails. Jess and I did some trail running at Island Lake St. Rec area and were constantly jumping in the weeds off trail to avoid getting run over. Looking forward to woodstock!