Well, I arrived at CodeMash last night right before the roads got bad. Found my old DD family immediately as I walked in the door (James, Mike, and Phil). They helped me move my drums in (thanks guys) and then we headed out to get some dinner. I ended up eating WAAAAAY too much and wound up refunding my dinner later that night into the porcellan bucket. I suffered from some insane insomnia well after that ordeal and didn't get to sleep until after 3am.
I wanted to wake up early and get in my 3 miler, but ended up sleeping in til almost 7:30am (alarm clock "am/pm confusion" issues). Since breakfast was almost over, I just grabbed my room key and headed down to the dining area to get in on the feast. Breakfast was excellent and I made sure I didn't over indulge this time. :)
Venkat Subramanium keynoted here at CodeMash this morning and he was a great keynoter, I laughed a lot and learned a lot. The first session I attended after that was 'Introducing Prototype and Scriptaculous" presented by Leon Gersing (aka: FallenRogue). He talked about using Javascript utilities (namely Prototype and Script.aculo.us (as well as various references to JQuery)) and I must say that it was very informative. I couldn't find any gleaming reasons for me to switch from my focus of learning JQuery to using these though (thoughts?)... I think I'm full speed ahead on my endevor to master JQuery. (Sorry Sergey) :)
The next session I attended the "Developing for Microsoft Surface"computing by Jennifer Marsman and... "Joe" from VectorForm (sorry Joe, great job though) :) 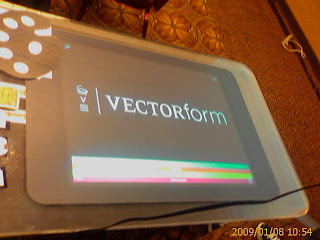 It was very cool. They showed how all the pieces work together to provide the rich experience, including the way that real world objects can be recognized using a new type (infinitely unique) "bar code" pattern. Jennifer Marsman sat down and even took an old WPF sample app and converted it to a Microsoft Surface app using simple RegEx find/replace in the XAML, and had it running on the Surface in less that 2 minutes (literally). This is not recommended of course, but the fact that they CAN do it says that it should be fairly easy to get geeks using it. After the session, I went out and tinkered on one of them in the hallway. They are very cool to play with, but that's about it for me...
After that, we broke for lunch and then I headed to the "Adobe Flex with MVC Frameworks" session by Robert O'Malley. Unfortunately I thought it was something that it wasn't and I wasn't understanding anything that he was talking about. I think the session assumed that I was familiar with (at least) one of the technologies that he was talking about, and I wasn't. :( I turned to Mike and we went out into the hallway and geeked out on our laptops instead and talked about some programming issues we were both struggling with. Much more funner?? IMO. :)
The next round of sessions, I chose to attend the "Functional Concepts for OOP Developers" session by Brian Webber and it was pretty intense. It was well done, but it covered a lot of different functional syntaxes (namely Haskell) and functional concepts (namely these) that I simply wasn't familiar with (YET). I was able to "keep up" for the most part with my understanding of how implementing the same object oriented concepts would work, but the talk was a little more involved than I thought it would be, to say the least.
For the last session of the day, I headed over to see the "Microsoft Virtual Earth Now in 3d" session by Aydin Akcasu. The last talk I saw from this guy included a Wii remote sending data to a C# app that (in turn) controlled a robot bird (that flew) the he let people fly over the crowd using bluetooth to send commands to it... again, using a wii remote. Talk about cool!? Anyway, this session Aydin showed people how to EASY it was to embed rich 3d mapping technology into existing apps with absolutely zero effort (3 lines of HTML, that's it); here is the page he built to give his talk with, right click and view source to see what I mean. Basically, Microsoft Live Maps offers a free mapping technology that lets users (ie. anybody that has a web page) expose an interactive 3d world (think Google Earth... but...) inside a web browser. To extend it and make it do things, simply create buttons with javascript to call methods on it. Beautiful! At the end of his talk, I went up to shoot the breeze with him and he showed me this cool 3d mouse called SpaceNavigator that he used to fly around the (virtual) world with. Very slick!
Dinner was damn good, then I hit the gym to get in my 3 miler before attending the jam session. The jam session was really cool! I only played a couple of times, but I did got to rock out with Carl Franklin, Brian 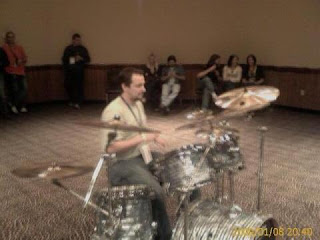 I ended the night with a bunch of geeks down at the bar. We discovered that Raji loves to buy drinks for people, just don't ask him for water... :)
author: Luc @ 2:44 PM

Thank you for sharing.It's the barcode in real world can be recognized by barcode reader C#.