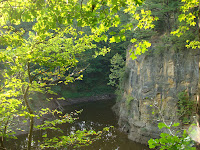 As many of my friends and family know, I'm very passionate about Blackhand Gorge State Nature Preserve. I visit the preserve about 3-5 times per week. We live about 1 mile from the preserve and I put in most of my training miles there on the various trails and the bike path.

Many people don't know that there is actually a LOT of history at Blackhand Gorge. This was a main stop for the old Erie Canal. This was a place where the old Urban Railway came through. This was a booming area back at the turn of the 20th century. Did you know that Hollister (yes the clothing company, Hollister) originated from Blackhand Gorge!? Even before Ohio became a state in 1803, this was a very active area for the Native Americans as well. There are so many stories and myths that surround Blackhand Gorge. One day I may do my homework and document some of the stories online... I feel very fortunate to live so close to this area. Really, I do. 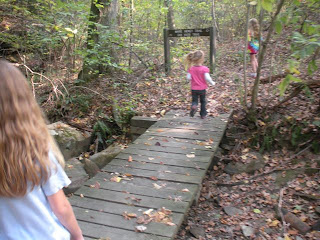 Over the last year, there have been some significant changes that have taken place in the management of the preserve. A new guy by the name of Jody Holland has stepped up and gotten the community excited about the preserve again. Back in the 70's and 80's, Blackhand Gorge was a place where people would go to spend the day with their families or just get out to enjoy the beautiful scenery. It was a nature oasis that was open to the community.

Over time, the preserve has been neglected and was managed in such a way that people did not feel welcome here anymore. It's unfortunate, but true. I know this for a fact, because around here (small town) when I ask people if they are familiar with Blackhand Gorge, they typically respond negatively. Everybody seems to have a story where they were run off by old management, or they knew somebody that was run off by old management. I personally know about 5-10 people who have had a bad experience when visiting the gorge. This has scared people away. They then take their stories home with them and tell their friends and families. The stories spread and mutate and become more elaborate over time. After a while, the bad attention took on a life of it's own and people stopped coming to the gorge. The community was not able to do anything due to the restrictions on what the definition of a "preserve" are. Ultimately the combination of strict management and red tape caused the Blackhand Gorge to be neglected and forgotten for many years. 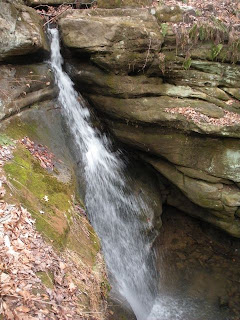 This is a new day for Blackhand Gorge. A new light has been shown on the preserve with an exciting new involvement from the community again. Jody has come in and brought a lot of positive energy and media attention to the preserve. He has rallied all of the necessary people together that can make a difference, and things are starting to take shape. The preserve has made front page news numerous times over the last few months. Key members from ODNR and DNAP have been out here to see just how beautiful this place really is. Land contracts are being revisited, and people are showing up to see what all the hype is about. It's great!

We (the community) have started a "friends group" for Blackhand Gorge. A friends group is nothing more than an organized group of people who volunteer their time and services to enhance state parks and forest systems. We have already had our first meeting to discuss some new ideas for the gorge. It was an amazing meeting; about 12-15 people showed up with ideas and goals for what we want to do for the preserve. My role in the friends group is the "designated geek". I manage all things IT. We have members in our group that specialize in many things and computers just so happen to be my thing. As a result, I've taken on the role of the web guy. I purchased a domain and setup a website for the Blackhand Gorge Friends Group:

The site is still brand new. I purchased the domain a while ago, but really put up most of the content tonight. You can expect to see a lot of changes over the next few weeks and months. I'd like to put in a history section, and also put up some photo galleries to show off just how beautiful the place is during all four seasons. Eventually, we'd like to setup some advertising for local businesses to draw some traffic to the site, which will ultimately drive traffic to the park.

If you've not been to Blackhand Gorge before. Come visit! If you need a tour guide, ping me! Next time you're sitting around surfing Facebook or flipping through channels on your TV, get up and go visit Blackhand Gorge! You won't be sorry!
author: Luc @ 4:03 AM