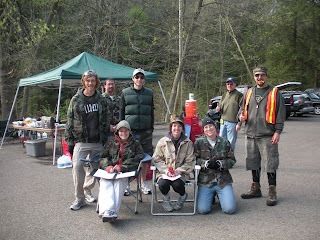 David, Ralph, Katie, Steve, Leigh, Lindsay, ?, Me
As I stated in my last post, I ran my Forget the PR 50k race last weekend at Mohican State Park because the official race was the following weekend and I would be volunteering. I had planned on going up after my work day on Friday, but the weather had set in and they were calling for high winds and a possibility of hail. Since I wasn't needed until Saturday morning, I decided to spend Friday night in my own bed and wake up early to be at Mohican by 10am instead.

Saturday Morning
At 8am I woke up and left the house to meet up with Don, Rob, and Kim at their cabin at 10am. We got all jacked up on coffee and went our separate ways. My duty was to mark the Purple loop with flags and white lime to help runners stay on the course. After my love/hate relationship with the Purple loop, this was a perfect choice for me. I knew this loop by the back of my hand since I'd screwed up on it so many times in the past. :) I took my hospital boot off and tied up my work boots real tight so that I could walked the course with a canister of lime and a handful of orange and yellow flags. It was a beautiful day to be out marking the course, and I had a blast.

After we had all marked the course, we met back at the Start/Finish to pack the aid station boxes full of supplies. It was a lot of fun, and I had a great time hanging out with other volunteers that showed up to help. Rob didn't cut any corners when it came to ordering supplies and there was plenty of food and drinks for every runner at every aid station. I really learned a lot about what goes into a top-notch aid station.

Once the aid station boxes were filled, the runners starting coming in to register for the race. Rob opened registration from 5pm - 7pm on Saturday, and we had quite a turn out! It was quite chaotic at first, as many runners pile in at once. We struggled keeping them all organized for about 20 minutes, but then we figured out a good system and it got easier.

After registration, all of the volunteers headed back to Rob's cabin for a feast. We all had a great time and shared various running stories. It was a lot of fun to hear some of the adventures that go down in a 100 mile race. I met a lot of cool people and really enjoyed the day! 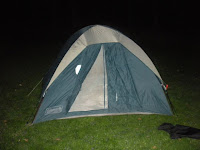 Around 8:30 or so, I was starting to get pretty tired. Don and Betty Baun were nice enough to offer their backyard to me to setup camp. I headed over there around 8:30 and got everything setup. It took me all of about 10 minutes to get everything in order, so I decided to start a fire and just chilled out for about an hour or so before calling it a night. 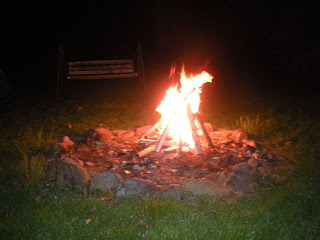 Sunday Morning
It was way too cold to get good sleep. Each time I turned my head, the coldness of the pillow would wake me up. I woke up at 12, 1, 2, 3, 4, a few times in between then finally at 5:15 (thanks to the Crazy Rooster that Nick told me about last year). :) 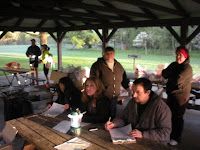 Once I got my tent broke down, I headed over to the cabin for some donuts and other sugary breakfast items before heading to the start finish where runners would be showing up shortly to register for the race. We did a lot of things before the runners got there, then when they started piling in, I sat next to Elizabeth and Michelle and we got runners to sign their wavers. Once the waivers were signed, Kim and Betty would hand them their race packets. We moved through the line pretty quickly. I saw a lot of familiar faces at check in and had a great time. 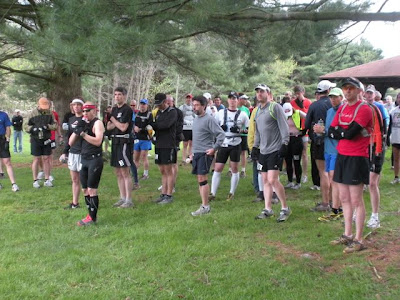 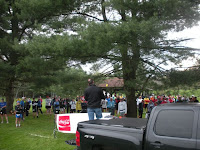 When it was about time to get started, Rob got up on his truck and gave the rules of the race. He introduced all the sponsors and explained some of the tricky parts of the race. Once he had briefed everybody on the course, Don Baun got up and had some words to say. Don asked everybody to keep their eyes open and really enjoy the beauty of the course. He is so right, sometimes people get caught up in the race itself that they don't see the actual beauty of the forest. Don gave a few good words of advise and then counted down the runners for the race. Off they went, the 50k runners were moving through the course! The 25k runners would start their race in 30 minutes. Therefore, we hung around for a while and then sent them on their way at 8:30. 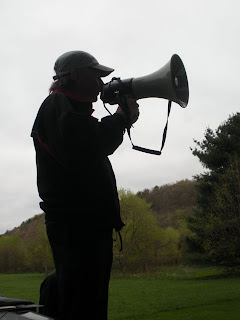 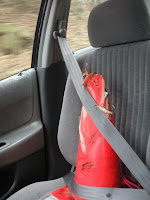 After the 25k runners left, I took Fred (he's a beat up pylon) to the Covered Bridge, and met up with the other aid station volunteers. The theme this year for the covered bridge aid station was M*A*S*H. So we all wore our finest camo's.

This was my first volunteering experience and I was quite honored and surprised that Rob asked me to be the "Course Marshal". It sounded pretty important, and I guess to think about it, it was a pretty important role. However, each person at this aid station played a key role and my role was just one of many. The biggest difference between my role and the others was that I would be wearing an orange vest. Basically, whenever somebody had any question about where to go, I would be the one to go to; they weren't to 'trust' anybody else. :P The 50k runners would be coming through the covered bridge 3 times, whereas the 25k runners would come through exactly one time. 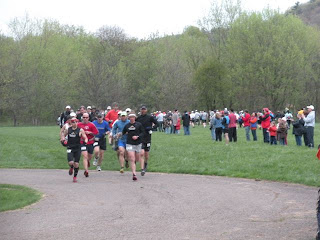 50k front runners at the start
My vest came in handy a few times, as there was a lot of traffic at the covered bridge, so I got to "use my authoritay" to stop traffic as runners came out of the woods. The only thing I was missing at times was a whistle and a billy club.

The Covered Bridge aid station was on the ball. Two of the runners that I met last week on the race (Steve and David) were manning this aid station as well with their wives (Katie and Leigh). Ralph was the aid station captain, and Lindsay was on her toes the whole time tending to the runners needs. Katie and Leigh ensured that every runner was accounted for and their time was recorded. They could tell you where any runner was at any time. Ralph ensured that the food supplies were up to par and made sure that nothing ran out. Steve, David, and Lindsay were all there to see to it that the runners were taken care of as soon as they entered the aid station. As the runners were approaching the aid station, the crew would find out what the runners needed before they got there so that they would be ready with water or Heed. I, of course, just stayed visible to all runners and managed traffic as best as I could. I was able to save a few runners races with my eagle-eye skills. But other than that, I just had a great time talking with runners and cheering them on.

The Race
One of the most exciting parts of being at an aid station volunteer is that you get to see the actual race. Especially being at the Covered Bridge (again, runners came through here 3 times). We saw all the excitement of the race. The front runner was Shaun Pope, and he made it look effortless each time he came through our aid station. Second place was last year's winner, Jay Smithberger. The race between Shaun and Jay was awesome. Shaun was 5 minutes ahead of Jay as they came through the aid station the first and second time. The third time through, Jay had picked up 3 minutes on Shaun. There were only 2 minutes between them at mile 27. Shaun came through the last time looking pretty spent, but Jay came through looking strong and ready to make his move. Ultimately, Shaun won the race by 1 minute!! I later heard later that Jay might have caught up to him, but took a bad spill (blood, mud, and all) with only about 2 miles to go and lost his momentum. It goes without saying that both guys kicked butt! 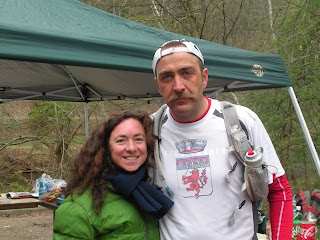 D'Lyn and Luca
Another great thing about volunteering is that I got to see was my running buddies come through. I saw Mike McCune (The Dillon Runner), Mark Carroll, Mike Keller, Gianluca Blengio, Tim Harber, and many others. Mike McCune was coming off of a knee injury and this was his first race since it had happened. He looked strong each time he came through and he finished with a very respectable time. It was great seeing Luca, Tim, and Mike Keller as well. Mark Carroll ran a hell of a race! This guy came into the aid station the second time and looked like he was pretty much ready to kick ass til the finish. Sure enough, he did; coming back into the aid station for the 3rd time he had moved his way up the chain of runners. This man is a machine. Mark finished very strong and he proved that he's a force to be reckoned with. Great race man!

Post Race
After Matt (ie. "The Michigan Sweeper") came through our aid station in his high fluting kilt :), we knew there was nobody else out there. Matt was a volunteer that ran behind the last runner and his job was to pick up all of the flags on the course. I can't imagine how hard that job must have been for a non back-of-the-pack runner, like Matt. As he came through the last time he said that he's mostly been walking all day; not much running at all. Once he left, we immediately broke down our station and picked up all the trash. It took a total of about 15 minutes. Once we broke down, I went back up to the Start/Finish to help with a few final things and say good bye to Rob and crew. After 8+ hours of "feet time" I was happy to sit back in my car and make the hour drive home... 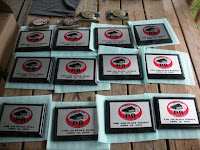 Congratulations to Rob, all the 50k and 25k runners, and a great job to all volunteers. This was an amazing experience for me and I look forward to doing it again next year. It was nice to be on the other side of the race for once. Most all runners (with the exception of a few) were very appreciative and friendly to all of us. This experience gave me a whole new appreciation as to what the volunteers do before, during, and after these ultra races.

Oh yeah, Rob, here's that picture I took the morning of the race. I fixed it up a bit because it was pitch black; it turned out "kinda" cool actually. :) 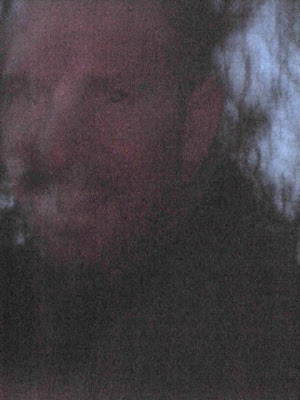 Hey buddy, that was a fun day - I enjoyed reading through your report of the weekend. Hopefully we will meet up at a race again soon!

That was a cool ass report!