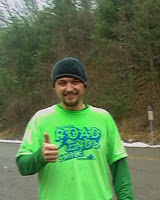 It's official. I'll be running my first 50 miler this summer. I just signed up and I'm super excited. Now I just have to make sure I train smart and don't overdue it. Yesterday's run got me pumped up for the upcoming events at Mohican this spring and summer. I ran two new courses yesterday (the purple loop and a new section for the Forget the PR 50k. Both were absolutely beautiful.

I got up at 6am and got held up looking for my keys, I finally resorted to just taking the van instead. So already I was a bit late getting out the door, and then of course I got stuck behind a few Amish buggies on my way up. So, I arrived at the covered bridge at 8:02am and was officially late. When I parked the car, I saw everybody posing for the picture below. :) Immediately, I put on my gloves, taboggin, turned on my watch and started running. 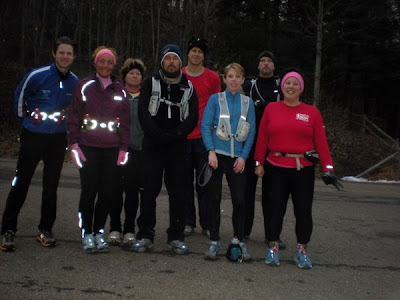 We started off on the purple loop and climbed up little Lyon Falls. It was beautiful. After there, everybody kinda spread out and I found myself in the middle. After about a mile after the falls, I was officially lost. I must have turned up a deer path or something because I saw everybody way ahead of me on the road, but I was way up on a rock cliff and couldn't find my way down to them. Luckily, I saw Kim and Debbie running along the road and I yelled for "HELP!" :). Kim got a pretty good laugh out of it, and I did too. :)

I stuck with them for a good while until we got on a section of the run that Rob mapped out for the Forget the PR 50K. It was a nice section and was EXTREMELY muddy. I loved it! After I ran ahead of them for a while, I found that I was lost yet again. :) This time, I ran across Rob, Mike, and Michelle. Boy was I glad to see them. My instincts told me to just hang out for a minute and wait, glad I did because I would have wound up running all the way around the lake. :P 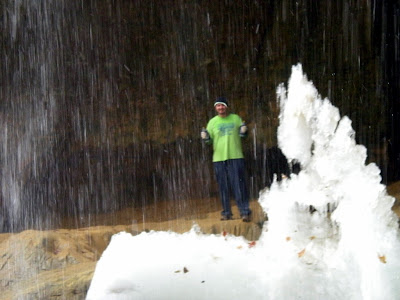 On the return leg, we followed the purple loop back around and then we ran into big Lyon Falls, and it was spectacular. I'd seen pictures of it on others blogs and after I ran past it I realized that I'd seen it before. However, it was from the other angle and on the last mile of a 20 mile training run with Rob (so, I was 1/2 out of it then). :) Regardless, it was really cool and I look forward to seeing it in the spring with all the colors. I may take the family here someday as it's actually a very small hike from the covered bridge.

Debbie, Kim, and I all got back to the covered bridge. Debbie headed on home while Kim and I trudged along to the orange loop. This is one of my favorites at Mohican, but probably because I've done it so many times. Each time I come to Mohican, I usually find myself treking down the Orange loop. It's long and it's really pretty. A few times I got ahead of Kim and when there was a cross road in the path I would hold up so I could ask her which way to go, she's been out here a lot more than me and knows them pretty well. About half way through, Kim and I decided it might be best to cut down a path to head back to the covered bridge. She was getting short of breath, and I was getting short of time to get back to my girls for Valentines day. It was already noon and we still had a few hilly miles to get back to the cars. This is where things got a little fun... :)

Kim thought she knew a shortcut down to the river, so we took a little few mud slide down some hills to a creek. That creek turned into another creek, and then another. :) We were climbing over and ducking under fallen trees and sloshing through freezing cold water for a few hundred yards. We were pretty wet by the time we got back to the main path. It was a lot of fun though. Kim sure knows how to make a trail run fun. :)

Here is an overview of my run yesterday. The first 1/2 mile didn't record due to clouds and all the trees. Remember, I was late and it didn't have time to find my location. :) 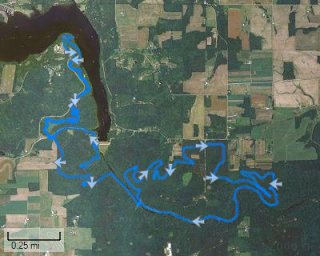 We got back to the cars around 1:15 or so and I headed home. This was a fun run and I can't wait to get back to Mo and try the Red/Green loop next. Rumor has it that it's got a few river crossings and pretty scenery. Fun times! I think I learned that I need to really learn the paths around Mo, because without the help of my running buddies, I'd probably still be out there looking for the covered bridge. :) Thanks guys!
author: Luc @ 4:15 PM

We will try to keep you on the right path! LOL

I know the Mo 100 course like the back of my hand but never seem to ever be able to run the race.
I've tried to get lost and can never make that happen.

Any time you want to go up just let me, Rob, Don, or Kim know.