Yup, you read it right. Today was my last day at Data Dynamics. Leaving DD was a tough decision. Especially after the company has done so much for me and my family. DD was, is, and always will be an amazing company. They took a chance on me and they helped shape who I am today. For the sake of good blogging, let me tell you what I mean by "they took a chance on me". Don't worry it's just a recap of the first year or two at the company... :) 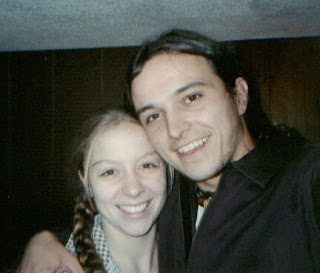 Back in 2000, Jennifer and I got married in June and I was a student at CSCC looking for a job doing Assembler Language, COBOL, or AS400 programming. I was working 2 piddly jobs making a total of about $100 a week and completely mooching off of my new wife. At the time, I was a COBOL whiz kid and breezed through all of my programming classes. CSCC didn't offer very good courses at the time for Visual Basic, but I really wanted to know how to create windows applications using that fancy GUI stuff. I had done some small database projects for some friends here and there just so I could self teach myself VB5.

The Interview
Fall was quickly approaching that year and I had been through countless dead-end tech interviews. Everybody wanted someone with "experience". However, how was I supposed to get experience if I didn't have a JOB!? I had to start somewhere... So sometime around September 2000 (exactly 8 years ago this month), I got called in from some head hunter telling me to show up in Columbus for an interview at some company called Data Dynamics.

Lucky for them, I had just cut my long hippie hair and bought some new clothes. This picture was actually taken the morning of my interview. Jennifer took the picture before we hopped in the car and headed to DD headquarters (I can't believe I found this pic!). So anyway, I walked in the door and was pummeled with a ferocious roar of a miniature pincher named Zeus. This really added insult to injury at that point; I was nervous, looked like a dork, and now everybody in the office knew that the potential "prospect" had arrived. Aside from the ferocious beast, this looked like a hip place to work. They had a pool table with tie-dye pool balls... I mean, it doesn't get much cooler than that! Right?

Immediately, the boss at the front desk (aka: Tim) starts yelling at this dog and comes out and shakes my hand. By this point, I didn't know what to think; I had a cloudy fish tank to my right, a really cool pool table in front of me, a snarling miniature pincher at my feet, and I'm shaking the owners hand. He told me to have a seat, so I did. About 2 minutes later I see this scruffy looking dude (aka: Scott) come out of one of the offices near the back and he tells me to come on back. He looked like Jesus, so I listened.

The interview was absolutely painful! Scott had a wrinkled up t-shirt, cut off shorts, long scruffy hair, a go-T, and he was sportin' Jesus-sandals. Tim looked like an owner (whatever that means), but I couldn't help but notice that he was drinking coffee from a VBITS '99 mug. I had heard about that conference (VBITS, now VSLive) from my Visual Basic Programmers Journal magazine (now Visual Studio Magazine) subscription. I thought it was so cool that this company exhibited their products at that show! This is what I wanted to do! This is the job that I want! I answered the questions as best as I could, but the one thing that sticks out for me (and always will) was when Scott asked me where I wanted to be in 5 years... I froze. Who knew this would be a question at an interview. I stuttered for a minute and thew up my index finger so that they knew I was onto something. Right then, I pulled out my Palm III out of my jacket pocket so that I could remember exactly where I wanted to be in 5 years... Lucky for me, I took notes before the interview and had this information readily available. I told them that I wanted to be a developer and that I wanted to be a drummer in a successful rock band. We talked a bit more, and then I shook their hands figuring it would be the last time I'd ever see them...

The Call
The whole ride home, I was pissed! I told Jennifer that there was no way they were going to hire me. I barely knew Visual Basic and this was a cutting edge company that was writing ActiveX components specifically for Visual Basic. We laughed about my interviewing skills for a while and talked about how cool it would have been if I could have worked there... But, I was going to keep interviewing until something else came up, since I tanked this interview.

The rest of the day just played out, and we had friends over that night for some cards and beer. I had just come back from the store or something and when I walked in the back door, all our friends at the table were looking at me with big smiles and Jennifer was grinning ear to ear... "What's going on?", I asked... "You got the job!"... "WHAT!?"... "YOU GOT THE JOB!!" Talk about a life changing sentence. I couldn't believe it. I had pretty much written them off since I was nowhere near qualified for the job. I remember how exciting it was to know that we were gonna be making some real scratch now. Jennifer and I had lived on pennies for way too long, and the starting salary at this job was waaay more than I could even fathom at that point. We all got drunk.

The Rookie
My very first role at Data Dynamics was DynamiCube 2.0 support. I would be in charge of assisting other programmers about how to use this product in their applications. Not only did I know very little about Visual Basic, but I knew NOTHING about pivot tables and analyzing numbers in a cross tab. I felt like I was in way over my head right out of the gun. Scott was my mentor for the first few months on the job and rather than helping me by answering my immediate question, he helped me teach myself how to learn. Rather than bugging him with insanely stupid questions day in and day out, I would basically spin my wheels for hours on this component trying to figure out how it worked and why anybody would even want to buy it. At times I felt like I was on my own trying to support these users while at the same time trying to learn this epic product. Looking back now, I wouldn't have wanted it any other way. Thanks Scott! :) 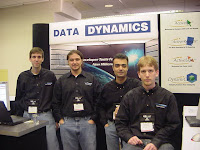 In no time, I was traveling all over the place. My first trip was to head out west to San Jose (aka: Silicon Valley!). It's safe to say that I felt like I had "made it" in my career by this point. I had never been past Indiana before that trip, so going out to California to learn some new technology was huge for me. After Silicon Valley, I was pretty much on the move all the time after that (or so it seemed). I was going to places (some regularly) like Orlando, San Fransisco, Boston, Los Angeles, Denver, Pittsburg, Las Vegas, Seattle, Tulsa, Russia!, Grand Rapids, Ann Arbor (puke), Tulsa, and of course various cities around Ohio. Since the day I started, I've supported and some what mastered :) DynamiCube, ActiveBar, SharpGrid, ActiveCube, ActiveSizer, ActiveReports, SharpUI, SharpGraph, and Data Dynamics Analysis. The company has let me develop my speaking skills, my PM skills, all kinds of stuff!

Conclusion
Well crap... I had a whole huge post written up that was going over everything that I had learned and experienced while I was at Data Dynamics. I wanted to give credit where credit was due, but once I got towards the end of the post, I realized that it started to look more like a resume. Rather than post a list of "look what I can do now", I just deleted it all and decided to stick to the point of the post. The purpose for this post is really to just say that I'm very happy to have had the chance to work for such a cool company. They took a chance on me, and really helped me "be all I could be" for many years.

The Data Dynamics motto is deliver reporting and analysis tools to developers, and that is exactly what they are still doing today. It's amazing how the vision hasn't changed in my 8 years there. They are constantly striving to deliver stellar products at a fair price. There is some intense competition right now in the component market, but I know that Data Dynamics has some tricks up it's sleeve... some of the upcoming products are sure to take the component and BI market by surprise.

I'll forever be a customer and proud alumni if Data Dynamics. I'm going to miss everybody! Tim, Ferhat, Issam, Scott, and everybody else... Thank You!

What's Next for Me? 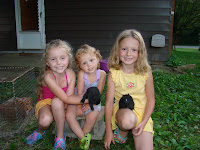 Without going into too much detail right now, my new gig is this: I will be working from home, writing code out of my basement full time for a small software company out of Chicago. This is a dream come true for both me and my family. I've always wanted to be able to stay home and write code to "bring home the bacon" and that's exactly what I'll be doing now. It's for that reason that I decided to change jobs...

Well, that is excellent!
Great post too. It's nice that you still are very positive about Data Dynamics.

I would have to think it is pretty rare (sad as that may be) that you get to work your dream job.

Best of luck to you in your change.

Best of luck to you, Luc! You sure had an amazing run at DD, and I'm sure your next gig will be just as amazing.

You'll need to convince your new company to sponsor the Dayton .NET group so you can drive over here to visit your sister, hang out with us, and eat great pizza!

Congratulations, Luc! It's been a pleasure working with you over the past few years. Hopefully you won't become a stranger!

I have taken a lot of chances out there for something better and sometimes it works, sometimes it doesn't.
It seems you have found exactly what you are looking for.

I work from home too and it is the best.

Working at home is really a great thing..It's comfortable and less stress..I'm working at home for years now and 'm happy about it..

Congrats on following what is best for you. Sounds like you had a great job and cool co-workers.

Kim - I agree that leaving on a good note is great.

Dan - Thanks, I totally realize this and plan to stay humble by it. :)

Jay - Thanks for your encouragement.

I'm so conservative that I don't know if I could have made a change like you did.
But, being in your pj's all day ain't so bad. Of course I don't wear pj's.
Congratulations!!!!!!